Since we're at the midway point of the season, this week's list is about the best players of the 2007 season:

1. Glenn Dorsey, LSU, DT
The 6-foot-2, 299-pound senior is by far the best player on the best team in the country. Everything about the Tigers' defense starts up front with No. 72. Dorsey anchors a team that leads the nation in total defense despite playing three ranked teams. Longtime LSU staffer Sam Nader, who has worked at the school since the '70s, said Dorsey is hands down the best lineman the Tigers have had since he's been in Baton Rouge. Given some of the talent LSU has cranked out in the past decade alone, that's a big statement.

2. Chase Daniel, Missouri, QB
So what if this guy doesn't have the prototypical size the NFL covets? He is a master at running the spread offense. No college QB makes better, smarter decisions. He's accurate and very patient in the run game, too. He's also coming off a career-high 401 passing yards and 473 yards of total offense in a 41-6 win over Nebraska.

3. Darren McFadden, Arkansas, TB
Even without much of a passing threat, McFadden is still running through teams for 156 yards per game. He also has rushed for over 100 yards in each of Arkansas' five games this season, tying a school record for consecutive 100-yard rushing performances. I wonder how many more yards McFadden might have if Felix Jones wasn't such a talent, too. 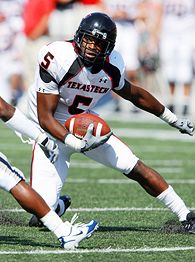 4. Tim Tebow, Florida QB
The hulking sophomore QB scared the heck out of LSU and proved his worth converting key third downs most of the night. Tebow's grinding out yards on the ground isn't any surprise, but he has been surprisingly sharp as a passer, throwing 13 TDs against just three interceptions while completing 66 percent of his passes.

5. Michael Crabtree, Texas Tech, WR
The 6-3, 210-pound freshman is putting up mind-boggling numbers. He is on pace for over 2,100 receiving yards and 34 TDs. Crabtree isn't a burner, but he's the kind of talent who often gets undersold in the recruiting process. Crabtree does the kinds of things stopwatches and tests can't gauge. "He's more elusive than fast," coach Mike Leach says. "He's also got a great sense of space and really good body control. The guy is always getting open and even now that he's marked, he's still getting open."

6. James Laurinaitis, Ohio State, LB
He's smart, tough and has a knack for making the big play. Just ask Washington, which was in good shape against the Buckeyes until Laurinaitis broke Jake Locker's heart. The Buckeyes have been terrific against the run, ranking second in the nation (47 yards per game). Laurinaitis is OSU's leading tackler and also has three sacks and two picks.

7. Matt Ryan, Boston College, QB
Granted the Eagles haven't played the stiffest competition, but their tough-guy QB who has led BC to its first 6-0 start in 65 years has been impressive. Ryan's numbers are solid (15 TDs, 5 INTs), but they do get overshadowed by the ridiculous numbers some other QBs are amassing. 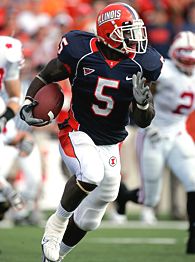 8. Dennis Dixon, Oregon QB
The improvement Dixon made over last season is stunning. He's been much more accurate, improving his completion rate from 61 to 69 percent, while also averaging more than eight yards per attempt. For the season his TD-INT ratio is superb (12-2) -- and few QBs are as dangerous taking off and running.

9. George Selvie, USF, DE
Every year some lightly heralded defensive end emerges and grabs the spotlight by dominating games and putting up some gaudy numbers. This year, Selvie is that guy. He is making big plays for the impressive USF defense, notching 10.5 sacks in five games to go with 18 TFLs.

10. Rashard Mendenhall, Illinois, RB
This is the most underrated big-time back in the country. Mendenhall has been overshadowed by Michigan's Mike Hart and Wisconsin's P.J. Hill, but he is the guy who makes the Big Ten's best running attack go. Mendenhall is averaging 129 rushing yards per game and 6.8 yards per carry to go with 10 TDs.