Maybe there is something to this Believe in Blue thing. Kentucky's Rich Brooks sure thinks so.

Nonetheless, he was doing his best earlier this week to process how Florida could be a seven-point favorite for Saturday's game at Commonwealth Stadium, this coming on the heels of the Wildcats out-dueling LSU and sending the Tigers tumbling from their perch atop the polls.

"How does that equate?" Brooks opined.

The Southeastern Conference has been a microcosm of it all. All those proponents of having a playoff in college football might want to tune in the next few weeks.

They'll get their playoff  and then some.

Five teams (that's right, nearly half the conference) enter this weekend's games in control of their own destiny and not needing any help to navigate their way to Atlanta and play in the SEC Championship Game. And for the first time since the divisional split in 1992, it's not just the usual suspects, either.

South Carolina and Tennessee each have just one loss in the Eastern Division. Kentucky also has just one loss, although the Wildcats would lose the head-to-head tiebreaker with the Gamecocks if they were to both win out. Alabama, Auburn and LSU are the one-loss teams in the Western Division. Florida's sitting there with two losses in the East, but the Gators are hardly out of it.

Amid all the upheaval, it stands to reason that this might be the year that somebody other than Florida, Georgia or Tennessee represents the East in Atlanta.

"Yep, it's quite different than it used to be," said South Carolina's Steve Spurrier, who correctly predicted back in July that his Gamecocks were ready to make a run.

The pack starts to thin out this weekend. Florida plays at Kentucky. Tennessee plays at Alabama. Auburn plays at LSU (ESPN, 9 p.m. ET). Consider it Elimination Saturday in the SEC.

And nationally, with No. 2 South Florida sure to plummet in the next BCS standings after its loss to Rutgers on Thursday night, the door is wide open for No. 4 LSU, No. 6 South Carolina and No. 7 Kentucky to move up if they keep winning.

"I haven't had time to look at it, but somebody told me that the East alone has more ranked teams than most of the conferences in college football," said Florida coach Urban Meyer, whose Gators are one of seven SEC teams occupying a third of the top 21 spots in the latest BCS standings. "That tells you first of all about the parity, about the talent level, about the coaching level.

"We're having our own little single-elimination tournament these next few weeks."

At first glance, it's difficult not to predict a Florida-LSU rematch in the SEC championship game. Their game two weeks ago, a 28-24 LSU victory, was one for the ages.

Are there two better, more talented teams in the conference? Probably not.

But the beauty of these next few weeks, given the unprecedented parity this season, is that one poor quarter by either the Gators or the Tigers might be enough to make them spectators come December. In other words, there isn't much margin for error.

LSU senior running back Jacob Hester knows exactly what to expect, and he also knows that the wear and tear of such a stretch is grueling.

"After any SEC game, you feel like you've been in six car wrecks. It's just unbelievable," said Hester, who is closer to 100 percent after suffering a deep thigh bruise against Kentucky last week. "I'm not trying to say anything bad about any other conference. But after you play an SEC game, you can tell the difference."

The winner of Saturday's Auburn-LSU matchup probably can go ahead and make reservations in Atlanta (OK, refundable reservations). Alabama still is hovering  for now.

But five of the past seven years, either Auburn or LSU has represented the West in the SEC championship game, and nobody else in the conference has fared better in SEC games since the start of the 2000 season. Auburn is 46-16 and LSU 46-17. 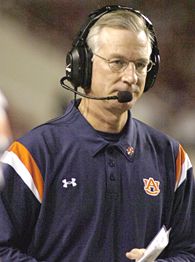 Auburn's Tommy Tuberville ought to feel right at home this weekend -- even though the game is being played under the dreaded lights at Tiger Stadium. Auburn has won eight straight games on the road and 13 of its past 14 away from home. The only loss during that span was to LSU, a 20-17 decision in 2005 that saw Auburn miss five field goals.

The other thing going for Auburn is that Tuberville has been the quintessential big-game coach. He has won nine of his past 10 games against top-10 teams and never has lost to a top-5 team in five tries as Auburn's coach.

"We don't spend a lot of time talking about where we're playing or the crowd," said Tuberville, whose Tigers were reeling after dropping consecutive games to South Florida and Mississippi State in the first three weeks of the season. "We just try to get better each week and challenge them to keep their poise and play consistently. There's no secret."

In 2004, when his Tigers finished unbeaten and never got a chance to play for the national championship, Tuberville lobbied loudly for a playoff.

This year, he'll get one.

"That's all we have every year in the SEC, a 12-team playoff," Tuberville said. "You don't play each other, but it's really competitive. Every year, we beat each other up, and the one that survives at the end of the year is pretty sound and solid, because they know how to persevere."

While Auburn, LSU and Florida all are quite familiar with these proceedings, this is completely new ground for Kentucky.

Then again, the Wildcats certainly looked like they belonged last week in rallying from a 13-point, second-half deficit and making every big play they needed to make to knock off LSU in three overtimes.

Senior quarterback Andre' Woodson, who firmly reinserted himself into the Heisman Trophy race, knows there still are those who doubt that the Wildcats can reach that level two weeks in a row. But none of those skeptics are in the Kentucky locker room.

"Nothing has really changed," said Woodson, who has passed for 1,786 yards and 21 touchdowns and only been intercepted four times. "Our confidence is still high, but we still feel like there's more to prove and that there are a lot of people who still don't have much respect for us."

Perhaps, but after being destroyed 49-0 by LSU at about this time last season, Kentucky is 11-2 since. Only LSU (12-1) has a better overall record among SEC teams during that time frame. Florida also is 11-2.

Reminded that Florida has won 20 in a row over Kentucky, Brooks joked that he was responsible for only four of those.

"Florida has been a perennially great football team," Brooks said. "They've won national championships in that skid against Kentucky, and Kentucky quite honestly hasn't been very good in a lot of those years. Hopefully, we can do something that has kind of been a theme of ours, and that's to do something that hasn't been done around here in a long time. We've done a few of those things and would like to do some more.

"If we want to be a factor in the SEC East, we have to win out, probably. If Florida wants to get back in it, they have to win out. So this is a huge game."