The 2007 college football season is barely two months behind us, but spring practice, believe it or not, is already upon us.

Texas kicks off the spring practice schedule on Friday. Miami, Mississippi State, Stanford and defending national champion LSU are among the teams that begin practicing next week.

While spring practice is the time of year when coaches typically evaluate younger players, begin to assess depth charts and pray their teams get through 15 practices without significant injuries, several schools will have more pressing concerns this year.

For other schools, such as Penn State, it will be business as usual. Nittany Lions coach Joe Paterno is about to begin his 43rd season at the school, and his approach is much the same as when he arrived at Penn State in 1966.

"Our primary focus is on fundamentals and getting better," said Penn State defensive coordinator Tom Bradley, who begins his 30th season working under Paterno. "We're not splitting up and getting into teams. We're working on blocking and tackling. We don't do a lot of tricky things. We spend the spring getting back to basics."

Before ESPN.com kicks off its conference-by-conference spring primers on Wednesday, here's a look at some of the top national story lines heading into spring practice:

1. Back to school: Two former NFL head coaches return to college football. Former Atlanta Falcons coach Bobby Petrino takes over at Arkansas and former Green Bay Packers coach Mike Sherman has made the move from assistant head coach of the Houston Texans to Texas A&M. Those coaches will spend the spring getting familiar with NCAA rules and managing time constraints with their players. Sherman inherits a boatload of skill players at Texas A&M, but he'll go through spring practice without QB Stephen McGee, who is recovering from shoulder surgery. Petrino will have to start rebuilding the Razorbacks, who lose star tailbacks Darren McFadden and Felix Jones. Two former NFL assistants, Rick Neuheisel of the Baltimore Ravens and Steve Fairchild of the Buffalo Bills, take over at their alma maters, UCLA and Colorado State, respectively.

2. Installation begins: More than a handful of teams will undergo complete renovations this spring. Former West Virginia coach Rich Rodriguez begins the difficult task of installing the spread offense at Michigan. Rodriguez will do it without an experienced quarterback, after Ryan Mallett transferred to Arkansas. Former Navy coach Paul Johnson installs his triple-option spread offense at Georgia Tech, and June Jones brings his pass-happy, high-octane attack to SMU. Auburn puts the finishing touches on installing the spread offense, which began when coach Tommy Tuberville replaced offensive coordinator Al Borges with Troy's Tony Franklin before the Tigers beat Clemson in the Chick-fil-A Bowl. 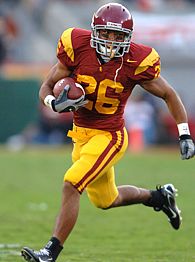 3. Kick off the rust: A handful of high-profile players will be back in action after sitting out the 2007 season under NCAA transfer rules. Former Arkansas quarterback Mitch Mustain will battle junior Mark Sanchez for the starting job at USC. One of the Trojans' top targets will be Damian Williams, another former Razorback. Former Trojans tailback Emmanuel Moody goes into the spring under the spotlight at Florida, where he hopes to become the runner the Gators lacked last season. Former Texas quarterback Jevan Snead takes over at Ole Miss, and the Rebels will look to UCLA transfer Jeremy McGee for help at tailback. Quarterback Kirby Freeman, who started three games at Miami last season, transferred to Baylor and is eligible to play for the Bears immediately after being granted an eligibility waiver by the NCAA.

4. Stay healthy: Several players will be in action for the first time since suffering injuries that caused them to miss all or significant portions of the 2007 season. Syracuse coach Greg Robinson's job security might depend on tailbacks Curtis Brinkley (broken leg) and Delone Carter (dislocated hip) returning to form. Neuheisel inherits talented quarterbacks Patrick Cowan and Ben Olson, but neither was able to stay healthy for the Bruins last season. Marshall gets back defensive end Albert McClellan, the 2006 Conference USA Defensive Player of the Year, who missed all of last season with a knee injury. Ohio State hopes Lawrence Wilson, who broke his leg in the 2007 opener, can replace Vernon Gholston at defensive end. South Carolina linebacker Jasper Brinkley returns from a knee injury which derailed his season and the Gamecocks' bowl hopes in 2007.

5. Find insurance plans: Two teams head into spring practice with serious issues at quarterback. Defending national champion LSU indefinitely suspended junior Ryan Perrilloux, who was expected to replace starter Matt Flynn. Tigers coach Les Miles hasn't yet determined whether Perrilloux will be available for spring practice. If Perrilloux isn't available, junior Andrew Hatch, who began his career at Harvard, and redshirt freshman Jarrett Lee will compete for the job. At Virginia, incumbent Jameel Sewell is among a handful of returning players who aren't enrolled in classes this semester. Sewell isn't expected to return to the team this fall, so sophomore Peter Lalich takes over the job.

6. Quarterback battles: There will be more than a few high-profile quarterback battles taking place at camps across the country. Replacing Matt Ryan at Boston College figures to be a battle between Chris Crane and JC transfer Codi Boek. Following the end of Kyle Wright's eligibility and Freeman's transfer, Miami will seek more stability at the position. Redshirt freshman Robert Marve will battle freshmen Cannon Smith and Jacory Harris, who enrolled in January. Look for a two-man race between Daryll Clark and Pat Devlin to determine who succeeds Anthony Morelli at Penn State.