SAN JOSE -- Twenty-five surgeries felt easy compared to watching all those damn third down-and-long conversions Nevada kept making Thursday night. After each made first down, he would drop his head and walk down to the end of his team's sideline, knowing all eyes were on him each step he took. 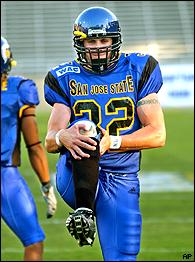 Waiting to get into the action, for San Jose State's Neil Parry, meant waiting for the Spartan defense to force Nevada to punt. And that wasn't looking as reasonable as it sounds. He would give himself distance from his teammates as he counted down the moment he'd waited three years for. Then when third down would come, Parry would mesh back into the "hotbox," right in the middle of the punt team and wait for his moment. Too bad he'd have to endure a little more time. Nevada would march down the field to score on their first drive.

Twenty minutes later, the Wolfpack would have another third-and-nine. His teammates would smack him on the butt or give him a pat on the shoulder pad as Parry would jog 30 yards towards the 50-yard-line to meet up with the punt team back in the hot box. False alarm. Nevada converted on another pass. First down. Parry would pop out his mouthpiece and tuck it inside the bars of his facemask and wander down to the other end of the sideline. The Pack would rip off another long touchdown drive and Parry could only clap and try and cheer on his teammates. Nevada, a team that was third-to-last in the WAC in third down conversions at 26 percent entering the game, would hit on its first seven third-down attempts and Parry would have to wait till after halftime for his shot.

"It's so frustrating," admitted Nick Parry, Neil's father at halftime. "I see him put his helmet on and then take it off and start pacing, but I'm sure he's in there trying to pump up his defense."

It sounds corny, but this is the way Hollywood would've wanted it.

Three years ago, Neil Parry was sprinting downfield, covering a kickoff in the third quarter of a game against Texas-El Paso, when a teammate was knocked down and rolled into Parry's leg. Parry heard the bones snap. His fibula and tibia burst through his skin. Still, his first thought was that his team had a shot at a bowl game and the coach's son realized instantly that he would miss it.

What he never could've imagined was that 48 hours later, he would have to have his right leg amputated.

Turns out, serious infections had set in and Parry had little choice.

The week Parry had his leg amputated, his brother Josh, a star linebacker for the Spartans, wanted to quit football. What was the point, he thought. Wasn't it football that cost his kid brother his leg? Neil talked him out of it. Keep playing for me, he said. Play for both of us. Josh did, making 17 tackles against Nevada the next game. He has pressed on to an NFL career with the Philadelphia Eagles. Truth is, Josh is driven by Neil, who vowed, even after his leg injury, that someday he would play again. His story became big news for a program that fell off the radar a long time ago. President Clinton even called Neil.

Six weeks after the injury, Neil stepped onto the field at Spartan Stadium. He was designated a co-captain for the season finale against Fresno State and he hobbled on crutches alongside his brother for the pre-game coin toss. Ten months after the injury, Parry, fitted with a prosthesis, was back at practice.

The ring around Spartan Stadium speaks about a gridiron legacy. There are the names of Pop Warner, Bill Walsh, Dick Vermeil, John Elway's dad Jack, all proud former Spartans. It seems out of place given that the stadium is among the smallest in 1-A and that more than half the place was empty. It almost always is. That's how it usually works when you're one of those BCS stepchildren. On this night, San Jose State was honoring one of its legends at halftime, 49ers Pro Bowl quarterback Jeff Garcia, but that wasn't what this night was about. There was something bigger unfolding. Scattered around the stadium were old men and teenage boys wearing Parry's No. 32.

San Jose State was trailing 32-17 midway through the third quarter and had Nevada in a third-and-five deep in its own territory. The crowd, which seemed to be outnumbered by the media, got to its feet. An old, bald man wearing a Spartans jersey who looked like Grandpa from The Munsters banged on a big tin drum, firing up the fans. The Spartans on the sidelines waved their arms and pumped their fists. And then, Nevada's quarterback, a skinny junior named Andy Heiser, hit on another third-down pass. First down. Figures, on this night Andy Heiser was looking like Andy Heisman.

The annual NCAA football stat guide is as thick as the New York City yellow pages, but for all the data packed into there, you will find no information about players competing with prosthetic limbs. Best anyone can tell, there has been one non-kicker, Richard Busacca, a defensive tackle for 1-AA Marist College in the early '90s.
To get on the field, Parry understood he would have to earn his way there. Coach Fitz Hill had been very clear, that there would be no "token" gesture. "If he does not do his job," Hill said, "he will be replaced, just like anybody else."

Being allowed to play was almost as hard as being able to play. Last year, Parry had another hurdle to clear. His insurance carrier, Mutual of Omaha, threatened to cancel its lifetime coverage for Parry's prostheses. Then when Mutual of Omaha reconsidered its position, Parry's leg started to bother him. "Sure he wondered, 'when is all this red tape gonna end,' but he never wavered," says his dad. "Never."

Last February, Parry underwent another surgery to remove nerve endings in his leg. He also was fitted with a new, lighter, more comfortable prosthetic leg that weighed less than three pounds, almost two pounds lighter than his first one. That increased his speed and mobility. The 6-1, 175-pound fifth-year senior worked out every morning this summer on his own, getting up before dawn to ready himself for his latest comeback. He began running with his new leg in July and didn't experience any significant pain. He then passed his next test when he returned to practice Aug.15. He admits he still gets "phantom" pain in his leg, but added that it's getting less and less.

Two weeks ago, Neil phoned his old man. Told him his teammates voted him to be a captain for the Nevada game. "I had tears in my eyes," his father says. He broke down again when he watched Neil come out of the tunnel, back in full uniform. "I was blubbering," says the old coach, his eyes still watery. "It's terrible when you have to watch a fat guy cry." Josh made the five-hour flight from Philly too. "It felt like I was coming from Japan that flight took so long," he said. "I broke down too. Tonight brought back a lot of memories." The tears started to fill up in the barrel-chested NFL guy's eyes too. "He's taught me so much."

Finally, on the last play of the third quarter, the Spartans defense held. On third-and-inches, Nevada tailback Chance Kretschmer tried to go off right tackle, but State cornerback Trestin George dragged him down for a one-yard loss. The Spartans sideline erupted. Trouble was, a flag went down right near Kretschmer. George was called for a facemask. Another Nevada first down.

Then, with 13:54 and Nevada facing a third-and-22, Parry buckled his chinstrap. Nevada ran a draw play. Fourth down. The crowd chanted "Parry ... Parry ... Parry." He sprinted onto the field with the rest of the punt return team. He lined up at left tackle and jostled with Nevada's Carl LeGrone at the line as the Spartans tried to set up a return left. After the kick, Parry hustled back, looking for someone to block, but the play would be over before he could line someone up.

You wouldn't have known from watching his stride that this was a kid missing a leg. Sure, he lumbered a little, but he's not the first person to put pads on and not have Carl Lewis' form. Parry was mobbed by his teammates as trotted off the field. In the stands, his big brother dropped his head between his knees. His father got a lump in his throat. "I was mad," Neil said after the game. "I really didn't do anything. It wasn't how I pictured it. All I wanted to do was go out there and hit somebody."

The Spartans went on to lose. Terrible tackling, coach Hill explained. His team just doesn't get to hit enough at practice. Course, he pointed out, he's afraid to have too much contact when his squad only has 69 guys on scholarship and he can't risk an injury. "But we'll take Neil's lesson and we'll use him as a role model."

So will others, said Mike Norell, the designer of Parry's new leg. "I have 450 patients and at least 449 of 'em were watching," said Norell. "He's an inspiration and he may have started something here."

Parry's response to that? "More power to 'em. I'll be the first one to talk to them and tell them to go for it."