NORMAN, Okla. -- Sometimes, football players tell you they'd be
happy to skip spring practice. Jason White is not one of them.

For most of the spring, he has watched stoically as his Oklahoma
teammates practiced. And though he understands coaches' caution as he
recovers from various ailments, he has chafed at the lack of action.

"You want to be playing," White said. "You feel like you're
losing ground when you're not in there." 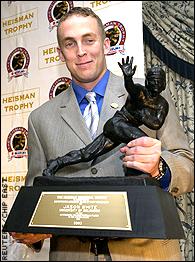 Never mind that White isn't losing ground. There's no quarterback
competition at OU, at least not for the starting job.

Standing and watching hasn't been much fun.

"You get bored," White said.

At least he's able to do something.

The hardest part about last season's disappointing finish was this:
Because of a broken toe (suffered in the Sugar Bowl), a sprained right
hand (suffered in the Big 12 championship) and minor knee surgery (to
clean out loose cartilage and debris), White was unable to immediately
get back to work.

"It took me longer to get over it because I couldn't just start
over," White said. "I couldn't go back and work out like I wanted
to. I couldn't throw the ball because of the cast on my foot and my
hand.

"It took me longer to forget about the season."

And that's what White has tried to do.

White said losing to Kansas State and LSU "put a damper on the
whole season." And yes, he has been annoyed by suggestions nationally
that he shouldn't have won the Heisman Trophy and locally that backup
Paul Thompson should have relieved him in the Sugar Bowl.

Still, he said he has moved on. Even the Heisman has been put
aside. The bronze trophy now resides at his parents' home, the better
to help White concentrate on the future.

After a whirlwind tour of awards shows and speaking engagements
during the winter, White curtailed the extracurricular activities. He
has limited media access; except in a few isolated instances this
spring, he has granted interviews only after scrimmages.

"That's all in the past," said White of last year's individual
accomplishments. "It's something I can look back on after next year.
But right now, I'm looking at what I want to do for next year."

OU offensive coordinator Chuck Long is looking at that, as well.
That's why White has been withheld from the Sooners' more physical
drills and sessions. That's why, even though White will be honored at
the Red-White game on Saturday, Long isn't sure if the quarterback
will participate.

"I just want Jason to go into the fall as healthy as he can get,
feeling good, finally," Long said. "I just want to get him to the
point where he feels as good as he can."

In the past, White has had to twist teammates' arms to get them to
participate in voluntary pass skeleton sessions (seven-on- seven
passing drills) during the offseason. That wasn't a problem this
winter.

"They were here," he said. "They wanted it. I think the whole
team is more hungry. You could tell by the way we went about the
offseason."

George Schroeder is a writer with The Daily Oklahoman.