The words stung Paul Peterson like a hornet: "You'll never be as good as your older brother."

He was a sophomore in high school at the time, an impressionable little guy from Ephraim, Utah, who was already dealing with the issue of being shorter than everybody around him. He digested the words, which were delivered by a coach, and placed them indelibly in his memory bank.

"Can you believe I still remember him saying that?" said Peterson, whose brother, Charlie, went on to play quarterback at Brigham Young. "It's stuck in my head forever." 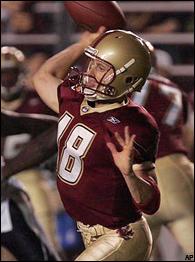 The folks at Boston College should send a thank you note to Peterson's former coach, because his motivation level has been in overdrive ever since. He has grown into a modern-day version of Doug Flutie, a catch-me-if-you-can freelancer who has the Eagles (3-0) off to their best start in five years.

They play at Wake Forest on Saturday (ESPN, noon ET).

Peterson is listed at 6-feet in the media guide, but acknowledges that he's a shade smaller, somewhere in the Flutie range.

"Almost six," said the 24-year-old senior, who worked out briefly in the offseason with Flutie, who made his mark at BC 20 years ago when the Miracle in Miami carried him to the Heisman Trophy. "Not quite."

His physical stature might be unconventional for the position, but the numbers fit perfectly: a school-record 6-0 mark as a starter, dating to last season; a 64-percent completion rate this fall; 527 yards passing with six touchdowns, two interceptions and three sacks.

In his past two games, Peterson has been a showstopper. He improvised his way to three scoring strikes in a 21-7 victory over Penn State, including a sprint out of the pocket and a laser to wideout Grant Adams for a 26-yard score that pushed the lead to 14-0. He later took his team 76 yards for the clincher, converting five third downs and one fourth down. The drive featured completions of 26 and 22 yards and a 10-yard run by Peterson on fourth-and-two.

"I wouldn't say I freelance," Peterson said, laughing. "I like to think I wait 'til the last possible minute to make something happen."

It was more of the same last week in a 27-7 rout of Connecticut, most notably a 34-yard play-action scoring pass to a wide-open Adams. The play put the game out of reach, 24-7.

"He buys himself time with his athleticism," UConn coach Randy Edsall said. "He can also create plays out of nothing. You can put a rush on him and he finds a way to escape. He's undefeated as a starter. He's done an outstanding job in what they're asking him to do, and again, he's won every game he's started."

Peterson, nicknamed Pistol by the BC defense after enduring his ankle-breaking escapability in the preseason, is making a case for himself as the Big East Player of the Year in BC's last season in the conference. If he achieves the honor, it would cap off a long and windy road.

It wasn't so long ago that he didn't get a sniff of Division I-A attention coming out of Bingham (Utah) High, forcing him to enroll at Snow Junior College. His time there was interrupted by a Mormon mission to Nicaragua from 1999-2001, during which he witnessed poverty-stricken citizens begging for their next meal.

Peterson lost 20 pounds on the trip after his insides were attacked by parasites. He came home weighing 165 pounds. He was skin and bones.

"And I went right back to football," he said. "I got home on June 28 and I was playing quarterback for Snow two months later."

He slowly got things together that first season, then lit the JUCO circuit up the following year, throwing for 2,982 yards and 35 TDs in 10 games. He put together a highlight tape, sent it to a number of Division I-A colleges and Boston College called first.

"It was a perfect fit," said Peterson, who moved into the starting lineup late last season. "It was a great school for my education and a great opportunity to play football."

Peterson, though, is far from the typical college kid. He married childhood sweetheart Meghan and they live off-campus with their dog, Chubs. When Paul was named the Eagles' starting quarterback over Quinton Porter at training camp, he and Chubs escaped the media spotlight and went to the Charles River to fish.

At an early-season practice, he had the audacity to curse after a broken play. He quickly ran over to a female manager and apologized.

"I guess I'm a little different," said Peterson, who pointed out that the players' girlfriends love him because he endorses the idea of marriage. "I don't drink and I'm never going to drink. I don't go to parties. That's the way it is for me. I just know that it's been a great ride."

Joe Bendel covers the Big East for the Pittsburgh Tribune-Review.