The only numbers that really interest Georgia defensive end David Pollack reside in the win-loss column.

So when anybody asks him about the early-season struggles of roommate and best friend, David Greene, and the Bulldogs' offense, Pollack offers up a few numbers of his own. 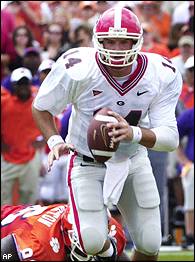 The former is Georgia's record this season and the latter is Greene's career record as the Bulldogs' starting quarterback.

"If we keep winning, Greenie's going to be the all-time winningest quarterback in college football," Pollack said. "The reason he's been able to do that is because he never really hurts us. He's not a guy that's flashy that everyone talks about. He just gets it done."

But there's also no denying how sluggish Georgia has been on offense heading into its stiffest test of the season on Saturday when LSU brings its ever-expanding array of blitzes into Sanford Stadium.

Senior flanker Fred Gibson echoed what probably the entire Bulldog Nation was thinking two weeks ago following a 13-3 victory over Marshall that was anything but a clinic in offensive execution.

"It's a shame. We have so many talented players," Gibson said. "We should be putting 40, 50 points on the board no matter who is in the game. We've got so much (talent). I just don't understand why we're scoring 13 points."

As splendid as the Bulldogs have been on defense the first three games, they've been just as ordinary on offense. The numbers are revealing.

They rank eighth in the Southeastern Conference in total offense, 10th in third-down conversions, 10th in first downs, and Greene is ninth in passing efficiency.

"We have to be a lot better and much more consistent," said Greene, who knows as well as anyone what it's like to be in the clenches of the LSU defense.

The Tigers sacked Greene eight times en route to a pair of wins over the Bulldogs last season, the final one coming in a 34-13 blowout in the SEC championship game.

"I really don't think we're that far away from being a good offense, especially when you watch the film from this last game," Greene said. "There were about four plays we should have scored on. We had 10 guys doing the right thing and one guy messing up.

"We're all taking turns doing those things. We've all got to get on the right page. We're doing some good things. We're just not putting any points on the board, and that's what we've got to get changed."

With the open date, the Bulldogs had some extra time to work out the kinks offensively. But that also meant an extra week for Georgia head coach Mark Richt to be peppered with questions about what's wrong with his offense.

He was uncharacteristically terse with reporters earlier this week when asked if he took the Bulldogs' offensive struggles personally since he was a former offensive coordinator.

Clearly, there's some frustration. But panic? Not hardly.

After all, the Bulldogs are still unbeaten and ranked third nationally in both polls. They've already won once away from home (20-16 at South Carolina) despite not playing their best football.

They get LSU and Tennessee the next two weeks at home, not to mention that tailback Danny Ware returns this weekend after missing most of the last two games with a bruised lung.

Then, there's also Greene, whose ability to produce in clutch situations is priceless in these type of games.

"That showed a lot about our team and how we believed in each other," Greene said. "There are going to be tough games where you're struggling, but it's all about winning. You've got to find a way to win."

Nobody has done that better than Greene, whose 35 wins as Georgia's starting quarterback rank fifth in NCAA Division I-A history. Tennessee's Peyton Manning owns the record with 39 wins.

Pollack, who's known Greene since they were 6, huffs when he hears somebody say that Greene has been off his game.

"That's a misconception," Pollack said. "He's not played poorly at all. Teams have done some different things to stop him. They've dropped in coverage, forced him to hit his check-downs more than he has and haven't been blitzing as much.

"But you saw how big a winner he was at South Carolina in coming back and winning at the end. I think this week you'll see something special from him."

Greene's accuracy has been his trademark. He's only thrown one interception this season, but it was returned for a touchdown by South Carolina safety Ko Simpson. His completion percentage (54.9) is also down from a year ago when he completed 60.3 percent of his passes.

LSU cornerbacks Corey Webster and Travis Daniels specialize in playing press coverage, which will put a premium on throwing to the right spots.

"The key is going to be ball placement more than anything," Greene said. "If they come out and play their typical defense, we will probably have a lot of one-on-one matchups with Fred (Gibson) and Reggie (Brown). If we throw a good ball, there's no way they can defend it.

"But they're two of the best corners in the nation. They're the reason their defense is so good. They can lock you down."

Just don't look for Greene to lock up.

Chris Low covers the SEC for The Nashville Tennessean.