Former Ohio State running back Robert Smith believes Maurice Clarett is telling the truth about receiving cash from boosters and other powerful fans of the Buckeye football team, but stopped short of indicting the university's coaches or staff for providing benefits deemed improper by the NCAA. 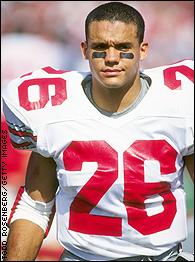 Why does Smith believe that Clarett is being truthful about the money?

Because Smith listened to teammates talking about the same sort of payments when Smith starred as a tailback in Columbus from 1990-92.

Smith's description of the booster culture surrounding Ohio State's football program in the early 1990s fits with Clarett's statements about the current one. In the Nov. 22 issue of ESPN The Magazine, Clarett said before he left events where boosters were present, they would pull him aside. "When you'd leave, (the booster) sets you straight," Clarett said. "They say, 'You got any money in your pocket?' They make sure your money's straight."

Now a businessman living in Florida, Smith said that he knew which boosters gave players money. He would not comment on the booster names or the names of teammates he says accepted money.

But when asked if he heard about Ohio State teammates talking about, in his words, "$100 handshakes," Smith said: "Yeah."

Smith, who twice led the Buckeyes in rushing before playing nine seasons with the NFL's Minnesota Vikings, says a booster never offered him money. He believes that was because he was a pre-med major who once got into a dispute with a coach over high-level classes Smith took.

"I think that if players are looking for that kind of thing they can find it," he said. "You know what I mean? Some more than others. I really think, though, I had the kind of image at Ohio State where I may have been the whistle blower type. So that wasn't shoved in my hand."

Clarett said coach Jim Tressel helped him get cars during his playing days by calling local dealerships. Smith said that he never witnessed anything like that when he was in school, however he heard similar stories from Buckeyes who played before him.

"I heard about car dealers, but that was like back in the '80s and even in the '70s actually," he said. "I didn't hear anything about that from current guys or guys that I played with."

Clarett also told the magazine that he would have been ineligible for Ohio State's 2002 national championship season if the football staff had not "aligned" him with academic advisors who simply had to maintain his eligibility by putting him in classes with handpicked teachers and by providing him with tutors who told him what to write for assignments.

Smith, 32, did not see or hear of any of those academic allegations during his time at Ohio State.

"The only thing I ever heard about -- I mean I heard easy A's from certain classes just because they were easy classes, and I heard it from regular students as well -- but I never heard about people getting tests or anything," he said. But, he added, "I'm sure there were some teachers that liked football players."

Smith said that he could see both sides of the argument.

"Yeah, we know this stuff goes on, but at the same time, like I said, I think that it's highly doubtful that the university was directly involved," he said

Smith said that he spoke with Clarett once, during the 2002 season, when Clarett wanted advice on handling the pressure as a player in Columbus. Clarett broke Smith's freshman rushing record that year. He also indicated he didn't believe Clarett's allegations would help a future career in the NFL.

"If he thinks it's going to help his standing with the NFL, he's got another thing coming," he said.