BOULDER, Colo. -- University of Colorado athletic director
Dick Tharp resigned Monday, acknowledging his bosses wanted
him out after a recruiting scandal and allegations of financial
mismanagement had stained the school's reputation.

Investigators scrutinized Tharp and football coach Gary Barnett
after allegations that sex and alcohol were used to entice
recruits, and lawsuits accused players and recruits of sexual
assault. 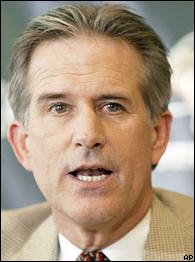 Barnett was suspended in the spring but kept his job and will
coach the Buffaloes in their regular-season finale against Nebraska
on Friday.

Tharp also said he had been informed "that the leaders of this
university have decided in favor of my departure."

He called the turmoil of the past several months "the most
frustrating experience of my life" but said his resignation wasn't
an admission of wrongdoing.

"When completely investigated, the record will show that I have
performed my duties responsibly," Tharp said.

This month, new allegations surfaced about fund-raising efforts
by a small booster club, a business deal between Barnett and a Colorado
regent and other financial mismanagement issues. The booster-club
issue compelled school officials to report the case to the NCAA.

Last summer, a grand jury, an independent commission and the
university investigated the recruiting and sexual abuse
allegations. No sexual assault charges were filed, but one former
recruiting aide was indicted on charges of soliciting a prostitute
and misusing his university cell phone.

The independent commission concluded that some players arranged
sex, drugs and alcohol for recruits without the knowledge of
coaches.

The commission harshly criticized Tharp and other
administrators, accusing them of lax oversight. Tharp's duties were
severely curtailed and the department was put under DiStefano's
supervision.

Despite the turmoil and questions about Barnett's own job
security, the Buffaloes are bowl-eligible with a surprisingly good
6-4 record and in contention for the Big 12 North Division title.

The coach labeled Tharp's resignation as just another in the
multitude of distractions his team has faced over the past several
months.

"I don't think this will affect them," Barnett said.

If Colorado defeats Nebraska and Missouri beats Iowa State on
Saturday, the Buffaloes will play Oklahoma on Dec. 4 in the Big 12
title game.

Regent Jim Martin said he welcomed Tharp's resignation but
called it "too little, too late."

"This is a needed step, but it came late in the game. This has
been going on for nine months. It's a small step but it is
certainly not a cure-all in terms of our credibility," Martin
said.

Tharp's support had also been eroding among boosters in part
because he proposed charging football season-ticket holders a
surcharge in an attempt to raise revenue.

Tharp has spent 25 years at Colorado, his alma mater -- nine as
athletics director and 16 more in other capacities.

The school will name an interim athletic director and then
conduct a national search for a permanent replacement. University
policy calls for any search to begin within the school's ranks.

Martin said he supports women's basketball coach Ceal Barry, who
has coached 21 seasons at Colorado, to fill the spot.

"She's the kind of candidate who would make sense," Martin
said. "She has distinguished herself for her openness and
communication skills."