BERKELEY, Calif. -- Just a day after California missed out
on a trip to the Rose Bowl, coach Jeff Tedford vowed to try again
for five more years. 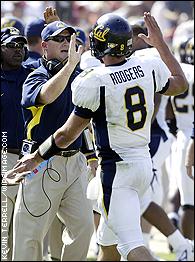 Tedford, the architect of the Golden Bears' swift transformation
from a laughingstock to a national contender, agreed to a lucrative
contract extension Monday that will keep him at Cal through 2009.

With other schools already inquiring about Tedford's
availability for the third straight year, the coach and athletic
director Sandy Barbour headed off any rumors by quickly reaching a
new deal that's worth as much as nearly any other school could offer.

"It was very nice to get this done in a hurry, because I didn't
want to entertain anything else," Tedford said. "I hope everybody
knows by now that I am 100 percent committed to this program in the
future."

And Cal is committed to Tedford, who will make $1.5 million per
year plus as much as $300,000 in incentives, along with a $2.5
million retention bonus at the end of the contract. The bonus
boosts his annual salary to $2 million -- exactly the amount that
will be made by new Florida coach Urban Meyer.

It's an impressive financial investment for Cal, an academic
power where athletics have always been viewed skeptically by
certain faculty and students. It's also a significant coup for
Barbour, who raised all the money to keep her football coach
entirely from private donors in just 2½ months on the job.

"There was a call to action that we put out there, and I can't
say enough about how people responded," Barbour said. "I've said
for months that I believed Jeff wanted to be here, and now he has
proven it."

The deal thrilled Tedford's players, who were downcast Sunday
after learning Texas had sneaked past the Golden Bears to steal the
final spot in the Bowl Championship Series. Cal, which had hoped
for its first trip to the Rose Bowl in 46 years, instead will face
Texas Tech in the Holiday Bowl.

"It's a dynasty in the making," junior center Marvin Philip
said. "Coach Tedford showed when he first came in here that he was
dedicated to this university, and now he's proving it. The best is yet to come for us."

With the support of new chancellor Robert Birgeneau, who
understands the countless benefits of a successful athletics
program, Barbour got her tenure off to a great start with a deal
befitting Tedford's growing national profile.

Tedford was almost certain to be on the wish lists of several
schools with coaching vacancies, including Washington and Notre
Dame. Last winter, he was courted by the NFL's Chicago Bears, among
many other suitors, but stuck with the school that hired Oregon's
former offensive coordinator for his first head coaching job.

From his California roots to his calm, cerebral demeanor,
Tedford always has seemed to be a perfect fit in Berkeley. His
players are academically solid at one of the nation's toughest
public universities, and his offense is as inventive and successful
as anything on the West Coast.

Tedford was the Pac-10's coach of the year in 2002 and again
this season for leading Cal (10-1) to its best campaign in a half
century. The fourth-ranked Bears' only loss was a six-point defeat
by top-ranked USC, and Cal is making back-to-back bowl appearances
for the first time since 1990-91.

Cal is 25-12 under Tedford, with three straight winning seasons
for the first time since 1950-52.

Tedford's deal also includes pay raises for his assistants,
including defensive coordinator Bob Gregory, a rising star after
his players' impressive performance this season. Cal is the only
team in the NCAA's top six both in scoring offense and scoring
defense.

"We'll be able to pay coaches what they deserve, and we'll also
be able to be competitive when we're hiring coaches to live in the
Bay Area," Tedford said. "That was a very important part of this
for me. I'm just one part of a whole program here."