SEATTLE -- Just two weeks after his firing at Notre Dame,
Tyrone Willingham has landed another job. 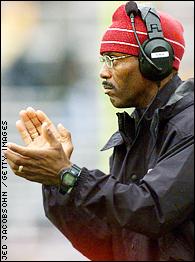 Washington officials believe the bookish coach can restore the
school's sagging football program to national prominence while
wiping away a messy smear from the Rick Neuheisel years.

"I am excited about being here," Willingham told reporters
Sunday evening before meeting with players on campus.

He was officially introduced at a Monday morning news conference. Willingham's five-year deal is worth up to $1.6 million annually.

The decision makes Washington the only Division I-A school with
black head coaches in the two major sports. Men's basketball coach
Lorenzo Romar is in his third season leading the Huskies.

The Huskies are coming off a school-worst 1-10 season, and Keith
Gilbertson stepped down after two years as coach. He replaced
Neuheisel, who was fired in July 2003 for gambling on NCAA
basketball.

Willingham, fired Nov. 30 at Notre Dame, had the shortest
non-interim tenure of any Fighting Irish coach in 70 years, raising
questions about whether he was given enough time to succeed.

The firing also drew criticism from the Black Coaches
Association.

Willingham was one of only five black head coaches in Division
I-A last season. That number dropped to two after Tony Samuel was
fired at New Mexico State, Fitz Hill resigned at San Jose State and
Willingham was let go.

Atlanta Falcons coach Jim Mora Jr., a former Huskies player and
alum, was approached by Washington officials but declined to be
interviewed, saying he's happy with his current job.

Willingham's connections on the West Coast should be an asset to
a Washington program rebuilding from the bottom of the Pac-10. He's
known as a law-and-order coach whose teams achieve academically.

He was 0-5 against Washington as Stanford's coach, but led Notre
Dame to a 38-3 win over Gilbertson and the Huskies on Sept. 25.

Emmert and Turner, both hired last summer, hope to restore
Washington's program, which shared a national championship in 1991
but has fallen to the Pac-10 cellar since Neuheisel's dismissal.

Neuheisel went 33-16 in four seasons at Washington, including an
11-1 record in 2000, when the Huskies beat Purdue in their first
Rose Bowl appearance since the 1992 season.

Neuheisel has sued Washington and the NCAA over his firing. The
NCAA didn't impose sanctions against him, saying a former
Washington compliance officer had written erroneous memos that
indicated such gambling was allowed.

Gilbertson was Neuheisel's offensive coordinator and stepped in
just weeks before the 2003 opener.

The Huskies went 6-6 in Gilbertson's first season, then fell to
1-10 and 0-8 in the Pac-10 this year. Turner announced Nov. 1 that
Gilbertson would step down after the season.

Willingham might have some salesmanship responsibilities in his
new job, linked to Turner's plan for an ambitious stadium
renovation that could cost up to $150 million by some preliminary
estimates.

Last week, Turner announced that additional fees will be added
to season-ticket packages, saying the money is needed for short-
and long-term improvements to the football program.

Emmert knows the importance of a successful team -- his last job
was as chancellor at last season's national co-champion, LSU. He
has called college football "the front porch of the university."