IOWA CITY, Iowa -- Kirk Ferentz sat in his living room two Saturdays ago and watched another chapter of Iowa football unfold on his television.

Four highly-coveted high school recruits playing in the U.S. Army All-American
Bowl in San Antonio told a live NBC television audience what school they were
committing to play for the following fall.

"The Iowa Hawkeyes," said four of the 17 players who announced their
intentions that day, including one who had kept Iowa coaches in the dark up until
the cameras began rolling.

Last week, sipping coffee and relaxing in a black leather chair in the Iowa
football office, Ferentz smiled while recalling the moment Chicago-area
natives Dan Doering, Dace Richardson, Ryan Bain and Tony Moeaki joined forces
to create one of the best recruiting classes in the nation.

"Six years ago I probably wouldn't have envisioned that," Ferentz said. "But
the world is changing too."

Six years ago -- when Ferentz went 1-10 in his first year as head coach of the Hawkeyes -- all he could offer recruits was a vision.

Today, after three-straight 10-win seasons, three-straight January bowl games,
and three-straight top-10 postseason finishes, Ferentz has more to sell than
just what could be. And that's why Ferentz and the Hawkeyes have recruits
telling Tennessee, Nebraska and Notre Dame "no thanks," Ohio State, Georgia,
and Michigan "we've found something better," and USC, Florida State, and
Miami "sorry, but we're heading for the cornfields."

"There were a lot of recruits that we were able to recruit this year that I'm
sure six years ago probably wouldn't have even opened our mail," said Ferentz.

The first day recruits can put their commitments into writing is Wednesday,
and the Hawkeyes are projected to boast a top-10 recruiting class for the
first time in Iowa football history. Recruiting analyst Tom Lemming has
the Hawks' 2005 recruiting class ranked as high as No. 4 behind Nebraska,
Tennessee and USC, while two other national recruiting websites had Iowa
ranked No. 5 and 6.

"Just like we're starting to earn some credibility on the field, I think we're
doing the same thing in the recruiting world as well," Ferentz said. "We're
not selling beaches, we're not selling exotic weather, but yeah, I think we
have a great product to sell here -- great school, great community and a
pretty solid football team."

The past two years, Iowa only signed a total of three four- and five-star
recruits according to scout.com's five-star rating system. This season, the Hawks are looking at 10.

Throughout his tenure at Iowa, Ferentz has been building a sturdy house with a
hammer and nails. Now that he's got power tools to work with, the Hawkeyes
might just be building a national championship contender.

"It's a good time to be a Hawkeye," said Doering, one of the top offensive
linemen entering college next year. 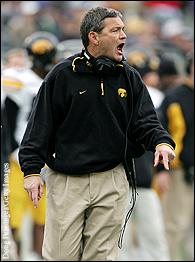 It sounds so simple, but there's a little more to it than that.

While outsiders may not be ready to give into the fact that Iowa has become a
perennial powerhouse, incoming recruits see it not
only as a smart choice, but the best choice.

"I look at them as a top program, but most people don't because of the name
Iowa," said Armwood (Fla.) high school running back Kalvin Bailey, who turned down
offers from Florida State and Georgia to become a Hawkeye.

"I don't think kids can argue the point that there's a better school than Iowa
overall," said Ryan Bain, a four-star defensive lineman recruit out of
Bolingbrook, Ill. "If you're serious about football and having a good
experience in college, I think it's the place to be."

Recruits see it as the place to be for three main reasons: They have endless
respect for Kirk Ferentz and his staff, they see a great opportunity to
continue to take a school to places it's never been before, and they see how
Iowa develops players who come through the system.

"The first time I saw a letter from Iowa, I thought 'Why would I want to go
there?'" said Minnesota native Rafael Eubanks, who turned down a chance to play
for Miami, Notre Dame and Oklahoma to join Iowa's offensive line. "But
it took a visit there to realize how special it really was."

Granted, competing recruiting schools like Notre Dame and Illinois went
through some turbulence with coaching changes last season, but a school
doesn't make the jump from barely having a top-40 recruiting class one season
to a top-5 the next simply by having good timing.

"Everything about recruiting is momentum," Lemming said. "If there's a perception that something special is happening somewhere, they all pick up the vibe."

There is definitely something special in Iowa City, and his name is Kirk
Ferentz.

His coaching ability is hardly matched while his personality can be found in
the guy next door.

"He's just a real comfortable guy to talk to," said Doering, who had over 30
schools offer him scholarships, including Oklahoma and Tennessee. "My coaches
and family and parents, they all loved him. My coaches said that he was their
favorite."

Although Ferentz's squad is one of only four teams in the country who
can boast three-straight 10-win seasons, what the Hawkeyes can't claim -- unlike schools like Tennessee, Nebraska, and Oklahoma that surround Iowa on
the recruiting charts -- is a national title.

And although they won't call it group decision, the five Chicago-area
recruits who played together at the all-star game in San Antonio admit they
had an influence on one another when deciding where to play the following fall.

"I think it was a little bit of a domino effect," said offensive tackle Dace
Richardson. "From my perspective, seeing why the other players chose it just
made me feel more comfortable about the school. I knew they were on the rise
and I also want to be the first to take them to a place they haven't ever
been."

But what seems to be the most appealing aspect of playing for the Hawkeyes for
the recruits is the dream of what they could one day become.

One of the nation's finest strength coaches, Iowa's Chris Doyle, is known for
turning small-town tight end Robert Gallery into a vicious offensive lineman
who went No. 2 overall in the 2004 NFL draft, and a walk-on by the name of
Dallas Clark into a top receiving threat for the Indianapolis Colts just two
years removed from college.

"The quickest way to the NFL could be Iowa," Lemming said.

And the recruits don't fail to see that.

"For me, I see what they do with walk-ons and I just wonder what they can do
with my ability," Richardson said.

Add in the fact that Ferentz just signed a contract extension to stay at Iowa through 2012, and those constant rumors about Ferentz leaving for the NFL have been silenced, a fact that's not lost on incoming recruits.

Still, for all Ferentz has accomplished in Iowa, there's still the one question that has yet to be answered.

"A lot of our recruits face that one. A lot of the coaches that have come here
have faced that one. Unless you're from Iowa, that's a pretty common
question, 'Why Iowa?' And I'm sure some of those schools are going to try to
figure out and be wondering, 'Why Iowa?' too. 'What are they doing in this
neighborhood?' And we might get ushered out of there pretty quickly. I don't
know. But that's OK. But you know, it's nice. It's nice to be recognized."