It took about 15 minutes in South Bend for Charlie Weis to impress people as a man with a clear plan for success at Notre Dame. A big part of that plan was the impressively diverse and talented coaching staff Weis hired.

This week that plan hit its first significant snag.

Weis announced Wednesday that assistant head coach and quarterbacks coach David Cutcliffe will not be rejoining the program after suffering a heart attack in March and undergoing triple bypass surgery. That immediately reduces the Notre Dame staff's level of experience, expertise and recruiting reach. 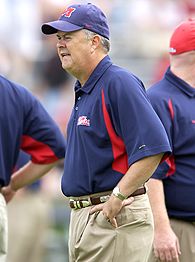 Cutcliffe, the former head coach at Mississippi, had been a sounding board for rookie head man Weis. His work in helping develop Peyton Manning and Tee Martin at Tennessee and Eli Manning at Ole Miss earned him the reputation as a quarterback guru. And his roots in the Deep South make him valuable for a program with a national recruiting base.

Despite the jarring news, the man with a plan is now the man with a contingency plan. Weis said on a teleconference Wednesday that he already has a successor in mind and on the verge of being hired, but he declined to name that person until a contract is signed.

"If we opened this thing up, I'd have 50 people applying for quarterback coach this afternoon," Weis said. "They need not apply."

Weis has said all along that he has a coaching "depth chart" in case he needs to fill a position. This was one move he's been mulling for months, in case Cutcliffe could not make a full recovery.

"I wasn't blowing hot air about having a depth chart," Weis said. "I had since the middle of March to think about it, so that makes this one a little easier to be prepared for."

Cutcliffe's successor might be familiar with Notre Dame. Former Fighting Irish quarterback Ron Powlus and former Irish assistant Peter Vaas have been the most prominent names in speculation.

While Cutcliffe convalesced in Mississippi, Weis received permission from the NCAA to allow Powlus, the program's director of personnel development, to act as a position coach during spring practice. Powlus primarily worked with Notre Dame's backup quarterbacks in the spring, while Weis worked with starter Brady Quinn. Vaas, a five-year head coach in NFL Europe, coached quarterbacks and running backs at Notre Dame under Lou Holtz.

Weis will need a coach who can handle the nuts and bolts of quarterback coaching: footwork, throwing technique and basic fundamentals  things he won't have time to obsess over as the head coach.

"To be a position coach and head coach during the regular season is a really tough task if you're going to run the team," Weis said.

But Notre Dame shouldn't suffer from a strategy standpoint. Cutcliffe is considered an accomplished offensive game-planner and play-caller, but that's Weis' strength as well.

Cutcliffe, 50, told Weis last week that he didn't think he could return to coaching this year. Weis asked him to spend the weekend thinking about it. On Tuesday, Cutcliffe called Weis and resigned.

"I want to thank coach Weis and the University of Notre Dame for being so good to my family," Cutcliffe said on a later teleconference from his home in Mississippi. "This health issue was just a sudden thing. It kind of snuck up on me."

After surgery, Cutcliffe had some complications that slowed his recovery. He said he's lost about 30 pounds.

This caps a fairly miserable year for Cutcliffe. He was given a new contract after guiding Ole Miss to 10 wins and a Cotton Bowl berth in 2003 but then was shockingly fired after a subpar 2004 season. He contemplated sitting out a year before Weis came along with his offer, and then he suffered a heart attack on March 9.

Nevertheless, Cutcliffe said this is "definitely not" a permanent retirement. He is planning to move to eastern Tennessee and will continue his recovery there.