LOS ANGELES -- Flanked by framed jerseys of Southern California's six Heisman Trophy winners, including his No. 11, Matt Leinart sauntered through Heritage Hall before veering off for a
quick break in his busy schedule.
It was Tuesday, which is meet with the media day for the
Trojans' quarterback, but he still had time to spend a moment with
Dean and Claire Huchel, an elderly couple who man Heritage Hall's
information booth once a week. 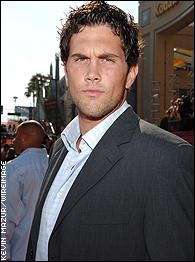 "Great guy, always says, 'Hi,' " said 83-year-old Dean Huchel.
Leinart gave Mrs. Huchel a big hug.
"Never misses, never does, every time he comes by," she said.
"He is just the nicest, most polite, considerate person. He's like
that with everybody."
All the attention that comes with being the biggest star in
college football apparently has done little to change Leinart.
"People don't understand how hard it is to do what he's
doing," USC offensive coordinator Lane Kiffin said. "He's like a
movie star in L.A. He's done a fabulous job dealing with the
attention. Most 22-year-old kids could never handle what he has to
experience."
Sure Leinart hangs around with TV stars now and then, but the
big left-hander from nearby Orange County didn't come back for his
senior season at USC to be a celebrity. He's back because he likes
being a college kid -- and he likes to win.
"He rides a bicycle and wears slippers around campus," said
wideout Dwayne Jarrett, Leinart's roommate.
Or as Kiffin describes the 22-year-old All-American: "He's a
California dude -- he fits it to a T. If he wasn't playing ball,
you'd see him on a skateboard or a surfboard."
Leinart figured to head to the NFL after leading USC to a 55-19
victory over Oklahoma in the Orange Bowl for its second straight
national championship and winning the Heisman Trophy.
What more could he accomplish in college? And he was expected to
be one of the top picks in the NFL draft, securing his financial
future.
Less than two weeks after tossing five touchdowns in the
national title game, Leinart shocked the football world when he
opted to return to USC.
"There's something special going on here that I didn't want to
give it up," he said that day.
Special indeed. If Leinart can lead the top-ranked Trojans to an
unprecedented third straight national championship, and maybe pick
up a second Heisman along the way, he'll stamp himself as maybe the
greatest college quarterback ever.
Ohio State running back Archie Griffin is the only two-time
Heisman Trophy winner, doing so in 1974-75.
"I'm not really focused on that," he said. "I know I won the
Heisman last year, but that was last season. There's been a lot of
hype about Archie Griffin being the only two-time winner of the
Heisman, but everybody on our team knows that's not what I'm
about."
Considering what he's done so far, and the talent-laden
supporting cast he has to work with, there seems to be nothing out
of reach for Leinart and the Trojans.
"The players are there," Leinart said. "We could be pretty
scary. We realize the expectations people have set for us. We're
not focused on that -- we'll just go game-to-game like we always
have.
"We've been very good about handling our business, but we
haven't proved anything yet this year."
Leinart has a 25-1 record since becoming USC's starting
quarterback two years ago as the successor to Heisman winner Carson
Palmer, and the Trojans bring a 22-game winning streak into this
season.
Leinart has thrown 71 touchdown passes -- one shy of Palmer's
school record -- and only 15 interceptions, completing 64.3 percent
of his passes for 6,878 yards.
And get this -- Leinart says his throwing arm was nowhere near
100 percent last season, and he was slowed by a sports hernia.
Leinart underwent surgery on his left elbow last January because
of tendinitis that hampered him since the second half of the 2003
season and kept him from throwing at all in the summer of 2004.
"It feels fine -- I don't even hesitate to throw," he said.
Leinart began throwing again in late May and worked out with
teammates for a couple months before the start of practice.
While he was recuperating, there were a number of photo shoots
where he mingled and met celebrities.
Heck, now he's as well known as his pals Nick Lachey and Jessica
Simpson.
"Pretty much everywhere I go, people recognize me," Leinart
said. "It's been fun. It's flattering at times, but it's kind of
overwhelming. I keep a low profile."
That's no easy task.
"Being out in Hollywood creates a special scene for him," USC
running back LenDale White said. "Everyone knows him."
Leinart wasn't happy when offensive coordinator Norm Chow left
USC for the Tennessee Titans, but that blow was softened when Steve
Sarkisian, a record-setting quarterback himself at BYU in 1995-96,
returned to the Trojans as assistant head coach and quarterbacks
coach.
Sarkisian was an assistant at USC from 2000-2003 before spending
one year as an assistant with the Oakland Raiders.
"Of course I miss him, we had a great relationship" Leinart
said of Chow, who called USC's plays the past two years. "I love
coach Chow, we'll be friends forever. He moved on."
After Chow left, there was speculation that Leinart might change
his mind about returning to USC and enter the NFL's supplemental
draft.
"It would have changed my decision if they would have brought
in a new guy. They brought Sark back. That was enough for me,"
Leinart said.
Sarkisian said he and Leinart think alike.
"There's nobody on this team I trust more than Matt Leinart --
our friendship has continued to grow," said Sarkisian, whose
children might have Heisman winning baby sitter.
Leinart and his girlfriend, Brynn Cameron, have bugged the coach
about letting them watch his kids.
"He's just a genuine good kid," Sarkisian said. "I think the
biggest thing is his teammates appreciate him."
A sociology major, Leinart needs two credits to graduate as he
begins his fifth year at USC.
"School's done for me -- I'm here to concentrate on football,"
he said.
Leinart will complete his schooling by taking a class in
ballroom dancing with Cameron, a sophomore from Thousand Oaks who
plays on USC's women's basketball team.
"We both kind of figured, 'Let's take that.' We'll practice our
tango or whatever the heck they do -- the 1-2 step," Leinart said,
smiling.
Sure beats working.