"This is good stuff," the palpably enthusiastic coach of the Broncos says. "This'll make the hair stand up on the back of your neck!"

Hawkins' voice vibrates off the walls of the tiny room, where he's giving an advance screening of the motivational video he'll show his team Friday night. On Saturday, the Broncos play in what's merely the biggest game in school history. The school's quick climb to the big time has hit a new high point between the hedges.

Boise brings its first-ever preseason ranking (18th AP) into a certifiable college football cathedral, testing itself against the tradition-steeped, No. 13-ranked Bulldogs in front of 92,000 fans and a national ESPN audience. For a moment this grand, the psyche-up material has to be goose-bump good. 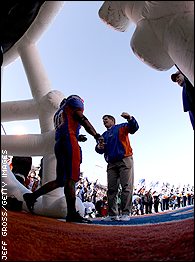 Suddenly, the Boise State logo fills the screen, followed by the words, "Do You Believe?" Then it cuts to a scene from "The Empire Strikes Back." Luke Skywalker and Yoda are sitting in a swamp beside their crash-landed spaceship, trying to figure out how to extricate it from the mire.

"It's too big," Luke says, after trying to budge his ship out of the mud.

"Size matters not," Yoda replies. "Look at me. Judge me by size, do you?  You must feel The Force around you.  Everywhere. Even between the land and the ship."

Then, while Yoda closes his eyes and uses The Force to lift the ship, the video cuts back and forth to clips of Boise State making big plays in Southeastern Conference stadiums, against South Carolina in 2001 and Arkansas in 2002.

Yoda lifts. Boise scores. Yoda lifts some more. Boise blocks a punt. Yoda has the ship levitating. Boise's defense crushes an Arkansas running back. The neck hair is at attention.

When Yoda's work is done, Luke says incredulously, "I don't believe it."

Yoda's matter-of-fact response: "That is why you fail."

"That's what I'm talking about!" Hawkins shouts. "Right there!"

Hawkins believes. He believes Boise State, in its 10th year of I-A football, is ready to advance its journey out of the gridiron backwater by beating the blue-blood Bulldogs in front of the largest crowd the Broncos have ever seen. He believes in Yoda, The Force and the guys from the blue turf who have transformed Boise State into America's unlikeliest football power.

And at this moment, with the competitive fire burning in his dark eyes and your neck hair up, would you argue with him?

Georgia  Georgiaaaaa
Every afternoon this August, the campus calm at Boise State has been shattered by the mellifluous voice of Ray Charles.

"Georgia, Georgiaaaaa," Charles sings, his voice booming at an immense volume from the Bronco Stadium loudspeakers.

It's on the Broncos' minds.

Every day when the players take the field for practice, Ray welcomes them. As the game has gotten closer, the sound of his voice has produced excited yips and howls. And after being serenaded by Charles, the players are treated to an endless, ear-splitting barrage of Georgia crowd noise: cheers, chants, the marching band, everything but Uga barking.

This has been the riotous backdrop for every snap taken by the Boise offense, in an effort to acclimate it to the sonic bombardment from 90,000 fans.

It's one of many preparatory steps Hawkins has conjured up for the biggest of games.

In anticipation of Deep South humidity unlike anything Idaho can deliver, he's kept practices on the sunlight-sucking blue turf -- even as air temperatures neared 100 degrees and the on-field heat reached 120. He's been hydrating his players intensively all week and monitoring fluid loss in practice. And to prepare his defensive linemen for the massive Georgia offensive line, he's forsaken the scout-team offense for at least part of every practice, having the first-team defense mash face masks with the first-team offensive line.

"If our D-line is going to go against Georgia, they better go against the best we have," Hawkins said. "We've got to get 'good on good' in order to get ready."

The getting ready has been going on for so long, the players seem surprised the game is finally at hand. It's been floating out there on the horizon for nine months.

The buildup began almost immediately after Boise State returned from the 2004 Liberty Bowl. That was the previous Biggest Game In School History, when the Broncos' bid for an undefeated season was unsprung by Louisville in a 44-40 thriller.

Most people thought the Cardinals would win big, but they wound up locked in an epic competition that showed Boise's mettle. Earning respect was nice, but it had a limited ability to soften the sting of defeat.

"We were kind of sour about the loss there," quarterback Jared Zabransky said. "We've thought about this game all offseason, since we got back from Memphis."

With Georgia on their minds, the Broncos pushed themselves relentlessly in summer workouts. Last year, the players ran the upper deck stadium steps every Tuesday, gradually increasing until they topped out at 16 ascents at the end. This year, the skill-position players topped out at 20 trips up the steps, and the linemen did 18.

"It can't be a season opener for us," Zabransky said. "We've got to be in midseason form right away."

Zabransky knows: Forfeiting the first quarter would be fatal -- as it has been in the past for Boise.

Mind games
The motivational video leaves out a couple of pertinent facts. Namely, South Carolina 32, Boise State 13, and Arkansas 41, Boise State 14. The Broncos are 0-2 all-time against the SEC, and 0-for-forever against BCS conference opponents away from home.

But Hawkins has that base covered as well. In his address to the team Friday night, he plans to read off the opening play-by-play from the South Carolina game -- his first as head coach of the Broncos.

The first play was a delay of game. A dropped pass on third down forced a punt. A penalty aided a South Carolina scoring drive. That was followed in short order by other penalties, dropped balls and a botched field-goal snap. The Arkansas game was similar, with Boise committing seven turnovers and falling behind early again.

In other words: Boise State showed up for both those SEC games with a case of stage fright. It didn't believe.

So Hawkins was preparing to pound the mental game with his players. The California native loves the psychology of the sport, the motivational gadgetry, the mind games. That's why he keeps handy books by Black Elk and about Gandhi, always looking for a fresh way into his young men's heads.

He's also a realist about how far that stuff goes.

"You could have the most motivated 5-foot-8, 170-pound guys in America, and they're not going to defeat Georgia," he said.

Talent is the necessary initial ingredient, and he believes Boise has enough of it right now to handle a rigorous September schedule. Provided that talent is buttressed with belief.

Colledge offered a job description for the potent Boise offense Saturday: "Run some points up, disappoint 90,000 fans and hopefully walk out alive."

To walk out alive, the Broncos must walk in alive. Part of that is embracing the moment.

This is not Just Another Game territory. ("A hypefest," was Colledge's description of the buildup.) Hawkins wants his guys to appreciate what they're walking into -- appreciate it without being awed by it. That's why he cajoled his father into making the cross-country trip for this game.

"On Saturday I'll have my game face on," he said. "But at the same time, you have to flip that around and say, 'Hey, how many guys get to go to Georgia and play a game there? How cool is that?'"

'It's blowing up around here'
How cool is it that a school tucked into a remote area of the Mountain Time zone, recruiting players that few powerhouse programs wanted, could come to Georgia for a legitimate big-time ball game? How cool is it that a program primarily known for years for its novelty turf could rise up in the last decade and crash the most entrenched power structure in college sports? How cool is it that a coach as unconventional and unpretentious as Hawkins could win 36 of 39 games the last three years, including a 24-0 whitewash of the Western Athletic Conference?

Hawkins is striving to finish off the construction of a program that was a junior college as recently as 1967. In the olden days, coach Lyle Smith -- namesake of the famous blue field -- put the lines on the grass himself, sifting powder through a coffee can. Today, the 89-year-old Smith toddles out to watch practice and smiles at the modern product.

"I'm right impressed with 'em," Smith said Wednesday. "I didn't think I'd be around to see it."

From where Smith sits on a sideline bench, he can see a mammoth $9.5 million practice facility rising behind the stadium. Later there will be new luxury suites and a new press box built atop the stadium. And eventually there will be new offices, a weight room, an academic center and all the other trappings of a big-time program.

"It's blowing up around here," said Zabransky, who was recruited by Boise State (and few others) off a potato farm in Hermiston, Ore.

Boise State has made a big-time, big-dollar commitment to football -- a commitment that was necessary to keep Hawkins at the school after Washington, Stanford and Notre Dame inquired about hiring him last offseason.

Support for getting better goes all the way up the chain of command. When Hawkins was discussing his vision for the growth of Boise State football with school president Robert Kustra, he told the prez, "I want new football offices that are the best in the country. I want people [i.e., recruits] to walk in and say, 'Wow!'

"I'm telling him that and he's saying, 'I hear you.' Everyone's on the same page. That's powerful stuff."

You gotta believe
As powerful as Boise's ascendance has been, it's also incomplete. There is wide daylight between the old money schools like Georgia and the new strivers. There is a reason the Broncos are coming to Athens in dragonslayer mode.

There still is much to prove, and to improve.

Start with team travel. The Broncos left Boise more than 3½ hours late Thursday night, delayed by a tardy charter flight. Seems the school has been obligated by the state bid process to work with a charter outfit that has been a recurring headache -- and never more so than two days before the biggest game in school history.

Not only was the plane late, but it left behind a large supply of Gatorade the school had ordered, and did not have sufficient water supplies. With hydration omnipresent in the Boise coaches' minds, this was a major problem. After raising some low-level hell, Bleymaier procured several additional cases of water -- and wound up carrying them to the back of the plane himself.

The flight got worse when first-year director of football operations Viliami Tuivai spilled a cup of ice on the school president. Tuivai was mortified, but Kustra took it in stride. Tuivai should still have a job next week.

By the time the flight touched down in Atlanta, it was 3:05 a.m. local time -- with a bus ride to a hotel into the suburbs still to go. You could feel the frustration simmering through the plane.

But the mood lightened a bit when the plane door came open and the party descended.

Georgia, Georgiaaaaa, was more than just on Boise State's mind. It was ground underfoot. The hedges await the believers from the blue turf.

Pat Forde is a senior writer for ESPN.com. He can be reached at ESPN4D@aol.com