<
>
Low: QB shuffle
16yChris Low
Hall of Fame voting winners and losers: David Ortiz gets in, who else got good (or bad) news?
Boston Red Sox
10hESPN.com
What makes David Ortiz a Hall of Famer? Stories from those who know him best
Boston Red Sox
10hESPN.com
Ortiz accepts Hall call; Bonds, Clemens shut out
Philadelphia Phillies
10hBradford Doolittle
AB to pursue legal action against Buccaneers
Tampa Bay Buccaneers
5hJenna Laine
Clips do it again, rally from 35 down to stun Wiz
LA Clippers
4hOhm Youngmisuk
Saints' Payton steps away, unsure of what's next
New Orleans Saints
14hMike Triplett
Sources: Louisville in talks to separate with Mack
Louisville Cardinals
9hJeff Borzello and Pete Thamel
Rodgers hints his decision likely by tag deadline
Green Bay Packers
11hRob Demovsky
Auburn survives scare in 1st game ever as No. 1
Auburn Tigers
5h
Swiatek wins 3-hour quarterfinal as temps hit 97
7h
Sean Payton put the New Orleans Saints in a 'better' place, but what's next?
New Orleans Saints
6hMike Triplett
Why Sean Payton's shadow will loom over Cowboys' Mike McCarthy
Dallas Cowboys
9hTodd Archer
32 NFL teams, 32 big free-agent decisions: Which players will return to their 2021 team?
Green Bay Packers
21hNFL Nation
Dustin Johnson, Justin Thomas and Rory McIlroy all looking for different levels of better
20hMark Schlabach
How to watch the PGA Tour's Farmers Insurance Open this Wednesday-Saturday on ESPN+
20hESPN.com
'Sirens are not unusual at AFCON': Inside the stadium disaster in Cameroon
8hEd Dove
Is it dribbling or is it showboating? And where do you draw the line?
16hJulien Laurens
USMNT favors frigid forecast, but will it yield home-field advantage?
16hJeff Carlisle
No Azteca fans? No Flores call-up? Mexico faces tough task ahead of crucial World Cup qualifiers
13hCesar Hernandez
'It's not about the talent': Patrick Ewing and the battle to avoid another lost season at Georgetown
Georgetown Hoyas
21hMyron Medcalf
Breaking down the 2022 girls' McDonald's All American basketball recruits
Georgia Lady Bulldogs
13hShane Laflin
Do the New York Giants need an experienced head coach to pair with rookie GM?
New York Giants
22hJordan Raanan
Will Jon Jones be the next challenger for the UFC heavyweight championship?﻿
2dMarc Raimondi
MLB lockout latest: What can we expect from this week's negotiations?
12hJeff Passan and Jesse Rogers
Time will tell if Villa's gamble on Coutinho pays off for both sides
23hIan Darke
Balotelli's back! What has Italy striker been up to during international exile?
20hChris Wright
LIVE Transfer Talk: Tottenham's Alli wanted by five clubs
20mESPN
Which players could move before the January window closes?
2dMark Ogden
Transgender swimmer Lia Thomas stays the course
3dKatie Barnes
Sep 16, 2005

In Rick Clausen's mind, he won Tennessee's starting quarterback job during the dog days of August.

He knew it. His teammates knew it. Even some of the Vols' coaches knew it. 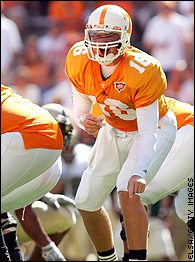 But when Tennessee head coach Phillip Fulmer handed out the starting assignment the week of the Alabama-Birmingham opener, Clausen was left holding the proverbial clipboard.

Fulmer went with Erik Ainge, who the Vols coach felt had more natural ability and would put more pressure on opposing defenses with his stronger arm.

How ironic that the Vols' first major step in that quest will come with Clausen -- and not Ainge -- at the helm when they take to The Swamp Saturday night for their annual showdown with Florida.

Clausen was the more efficient quarterback in Tennessee's wobbly 17-10 win over UAB. Ainge, after looking good early, unraveled after coming back into the game.

Of course, part of Fulmer's reasoning in going with Ainge as the starter in the first place was because he knew how Clausen would respond if the Vols needed him off the bench. He was their savior a year ago when Ainge and Brent Schaeffer were injured.

Fulmer wasn't so sure about Ainge, who's admitted that playing in spurts has been "different."

"It's something I'm going to have to get used to," Ainge said. "The sooner I do, the better it will be for the team. But I'll be ready."

Clausen, selected as one of the Vols' team captains prior to the season, gets a kick out of hearing about everything he's not.

Can't throw it down the field. Can't move around and make plays. Can't squeeze the ball in tight spots.

"You wonder what I'm even doing at Tennessee," Clausen says facetiously.

Keep in mind that Clausen is the same player the Vols took off the scrap heap at LSU a few years ago when he was slowly spiraling down the Tigers' depth chart. He might have expected to come in and play at Tennessee eventually, but he was the only one.

Former LSU head coach Nick Saban turned him loose to Tennessee knowing that the Tigers would have to face the Vols during the last year of Clausen's remaining eligibility. How many SEC coaches would ever let a player walk (at least one they thought could play) and take a chance on that guy coming back to beat them?

The short answer: None.

But Clausen has bucked the odds. He's smart, doesn't try to get outside his limitations and has an edge about him that wears off on his teammates.

The Clausen family also has a pretty good track record when it comes to The Swamp. Rick's older brother, Casey, never lost there in two starts. Not bad when you consider Peyton Manning, Tee Martin and Heath Shuler are a combined 0-for-The Swamp.

"The louder it is, the better it is," Rick Clausen said. "That's the way I look at it, just because there's nothing better than going to another person's stadium and trying to silence the crowd."

While Clausen was the starter last season in the SEC championship game loss to Auburn, he's yet to go on the road as the Vols' starter against a team as talented as Florida.

How will he respond?

"We're going to find out pretty quick," Clausen said. "Probably the closest thing to that was the SEC championship game. My numbers weren't very good [8-of-20, 69 yards, one touchdown], but I felt from an execution standpoint and running the offense that I did a pretty good job."

It's not as if the Vols are going to kick Ainge to the curb. He's too talented to forget about and proved last year that he could win big games. He engineered the comeback against Florida and also won on the road at Georgia, Mississippi and South Carolina.

Fulmer's preference is for either Clausen or Ainge to take the job and run with it. He's not particularly fond of a two-quarterback system.

But the Vols wouldn't be the first SEC team to win a championship with two quarterbacks sharing snaps for part or most of the season. In fact, since the league expanded in 1992 and went to two divisions, five teams have won championships while playing two quarterbacks.

Most recently, Georgia won the SEC title in 2002 with David Greene and D.J. Shockley dividing up the snaps. Greene was the clear-cut starter, but Shockley played in 10 games as a change-of-pace guy and would have played more had he not broken his foot in the second game against South Carolina.

Florida won the championship in 2000 with Jesse Palmer and Rex Grossman sharing the work. Palmer started off as the No. 1 guy and played the whole way that year against Tennessee, but Grossman took over midway through the season.

Clausen doesn't care what combination the Vols use as long as it leads to a championship. He's also unfazed by Fulmer's initial decision to go with Ainge as the starter.

"I thought I played well enough in the spring, summertime and two-a-days to win the job," Clausen said. "Unfortunately, things just didn't happen the way I wanted them to do. That's kind of been the story of my life. Everything kind of takes a little bit longer for me to be successful."