I'm sorry.
Why should I say I'm sorry?
If I hurt you,
You know you've hurt me too.

You're angry.
Why shouldn't you be angry?
With what we've been through,
Well I get angry too.

"Lost" won the Outstanding Dramatic Series at the 57th annual Emmy Awards on Monday. While the Bottom 10 doesn't know much about handing out any golden statues or hosting any stylish after parties, it does know how to celebrate the drama of being lost.

However, determining which team is the most lost isn't easy. What is clear is that we have identified four early-season nominees for top Bottom 10 honors. Ball State, Buffalo, Central Florida and Temple have distinguished themselves in 2005. Since Central Florida opened the season first in the rankings and Week 2 No. 1 Buffalo actually scored last week, it's time to let one of the other members of the fearsome foursome shine in the top spot. 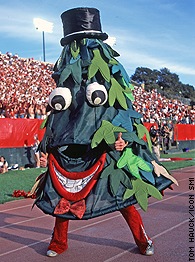 So, it's the Owls by a feather over the Cardinals. Enjoy your stay in the top Temple. But remember Ball State, just being nominated is a tremendous honor.

No need to bring in a Stanford graduate to calculate this week's No. 5 spot. Even those of us without that lofty sheepskin could figure this one out. Stanford's 20-17 loss at home to UC Davis makes the Cardinal's selection a no-brainer. The Aggies, who are in the third year of transition from D II to D I-AA, held the Cardinal to 180 total yards and no offensive TDs in Walt Harris' home debut. Stanford lost to a team with only 35 scholarship players and a team that had already lost to New Hampshire and Portland State. Ouch.

Sometimes the schedule makers give us those too-good-to-be-true Saturdays. Sept. 24 is one of those days. This week's Pillow Fight is a three-pack. The Directional Michigan title chase begins when Eastern Michigan travels to Central Michigan. And the Sun Belt offers two classic matchups with Florida International trekking to Arkansas State and Florida Atlantic hosting Louisiana-Monroe. Enjoy.

ESPN.com users had plenty to say about the Sept. 20 Bottom 10.

With apologies to Steve Harvey, here's this week's Bottom 10.

Dropped out: Duke, Louisiana-Lafayette and TCU.

David Duffey is a college sports editor at ESPN.com.