<
>
College GameDay Final Extra
16y
Hall of Fame voting winners and losers: David Ortiz gets in, who else got good (or bad) news?
Boston Red Sox
9hESPN.com
What makes David Ortiz a Hall of Famer? Stories from those who know him best
Boston Red Sox
9hESPN.com
Ortiz accepts Hall call; Bonds, Clemens shut out
Philadelphia Phillies
9hBradford Doolittle
AB to pursue legal action against Buccaneers
Tampa Bay Buccaneers
5hJenna Laine
Clips do it again, rally from 35 down to stun Wiz
LA Clippers
3hOhm Youngmisuk
Saints' Payton steps away, unsure of what's next
New Orleans Saints
13hMike Triplett
Sources: Louisville in talks to separate with Mack
Louisville Cardinals
8hJeff Borzello and Pete Thamel
Rodgers hints his decision likely by tag deadline
Green Bay Packers
11hRob Demovsky
Auburn survives scare in 1st game ever as No. 1
Auburn Tigers
4h
Swiatek wins 3-hour quarterfinal as temps hit 97
6h
Sean Payton put the New Orleans Saints in a 'better' place, but what's next?
New Orleans Saints
6hMike Triplett
Why Sean Payton's shadow will loom over Cowboys' Mike McCarthy
Dallas Cowboys
9hTodd Archer
32 NFL teams, 32 big free-agent decisions: Which players will return to their 2021 team?
Green Bay Packers
20hNFL Nation
Dustin Johnson, Justin Thomas and Rory McIlroy all looking for different levels of better
20hMark Schlabach
How to watch the PGA Tour's Farmers Insurance Open this Wednesday-Saturday on ESPN+
20hESPN.com
'Sirens are not unusual at AFCON': Inside the stadium disaster in Cameroon
8hEd Dove
Is it dribbling or is it showboating? And where do you draw the line?
16hJulien Laurens
USMNT favors frigid forecast, but will it yield home-field advantage?
15hJeff Carlisle
No Azteca fans? No Flores call-up? Mexico faces tough task ahead of crucial World Cup qualifiers
12hCesar Hernandez
'It's not about the talent': Patrick Ewing and the battle to avoid another lost season at Georgetown
Georgetown Hoyas
20hMyron Medcalf
Breaking down the 2022 girls' McDonald's All American basketball recruits
Georgia Lady Bulldogs
12hShane Laflin
Do the New York Giants need an experienced head coach to pair with rookie GM?
New York Giants
21hJordan Raanan
Will Jon Jones be the next challenger for the UFC heavyweight championship?﻿
2dMarc Raimondi
MLB lockout latest: What can we expect from this week's negotiations?
11hJeff Passan and Jesse Rogers
Time will tell if Villa's gamble on Coutinho pays off for both sides
22hIan Darke
Balotelli's back! What has Italy striker been up to during international exile?
19hChris Wright
LIVE Transfer Talk: Tottenham's Alli wanted by five clubs
22mESPN
Which players could move before the January window closes?
2dMark Ogden
Transgender swimmer Lia Thomas stays the course
3dKatie Barnes
Sep 25, 2005 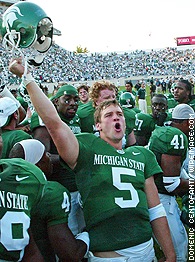 Drew Stanton leads a new and improved Michigan State team.
Former New Orleans Saints coach Jim Mora once told reporters, "You think you know, but you don't know, and you never will."

In a nutshell, that's football. And that's why so many Americans get that feeling of anticipation shortly after breakfast each fall Saturday and Sunday. We think we've got it figured out, but deep down we know something that day is going to surprise us.

Both the expected and the unexpected make the sport fun, and Saturday had plenty of both for college football fans.

Here We Go Again
• Just like it did in Pac-10 road games against Stanford and Oregon State last year, top-ranked USC teased us with a lethargic first half at Oregon and then made us feel foolish for believing the upset ever had a chance. I swear I'm not getting roped in the next time the Trojans trail at the half, but I'm sure I'll fall for it again.

• Virginia Tech scored 17 points in a span of 44 seconds against Georgia Tech, thanks to the magic of BeamerBall. The Hokies had two defensive touchdowns during that barrage after having scored a special teams TD earlier in the game. They've now logged an amazing 98 non-offensive touchdowns in 218 games under Frank Beamer. Hard to believe something so incredible has become so ordinary.

• Michigan lost its first road game of the season for the sixth straight year, thanks to a late TD march by Wisconsin. Since winning the 1997 national title, the Wolverines have lost seven of their eight road openers. The lone win came in 1999 at Syracuse. The quarterback for UM that game? Tom Brady.

Say What?!?
• Last week, several columnists declared Louisville's 11-0 season to be a foregone conclusion. But in a matter of hours on Saturday, the Cardinals went from being a BCS lock to becoming the Big East's whipping boy. Bobby Petrino's bunch was a three-touchdown favorite over South Florida and lost by more than four touchdowns.

• Michigan State had rightfully earned a reputation as a program that couldn't handle success after following up seven straight wins over top-10 teams with a loss in the following game. And most of those losses came against teams in the mold of Saturday's opponent, Illinois. Upset alert? I guess nothing says "these ain't the same ol' Spartans" like 61 points and 705 yards. Streak over.

• Late in the fourth quarter of South Carolina's win over Troy, Antonio Heffner completed a pass to Tim Frisby for 9 yards. It was a fairly ordinary play, except for the fact that Frisby is a 40-year-old walk-on who also happens to be an Army veteran and father of six. That's something you definitely don't see every day. Congratulations, Pops!

FEELING MINNESOTA
Minnesota is 4-0, and some of you may say, "We've seen this before."

Indeed, this is the fifth time in the last seven seasons the Gophers have started 4-0, and each of the previous four times, they have gone on to lose at least three games in conference play. But this Minnesota team has already shown it might be different.

Before Saturday, the Gophers had lost their first meeting with a ranked opponent in eight straight seasons. Now, after beating No. 11 Purdue, Minnesota has won its initial "big game" of the year for the first time under Glen Mason. Too bad it'll take more than one win over a ranked team to capture the Big Ten title. Wisconsin, Ohio State and Michigan State are still left on the Gophers' schedule.

WORKING OVERTIME
Is there some magnetic force in Michigan that draws all of the state's teams toward each other?

The only game in this span that didn't go to overtime was the Sept. 17 battle of Washtenaw County, which was scoreless for nearly two minutes before Michigan finally pulled away for a 55-0 win over Eastern. Expect a much tougher test for the Wolverines this coming weekend when they travel to, you guessed it, Michigan State.

INSIDE THE NUMBERS
Key Stat
664
Total offense differential from the 2004 and 2005 Iowa-Ohio State games. The Hawkeyes outgained the Buckeyes by 271 yards last year and were outgained by 393 yards on Saturday.