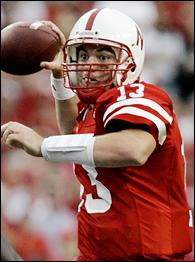 Zac Taylor set Nebraska records for completions (36) and yards (431) against Iowa State.
Four of the top seven programs in all-time victories -- Alabama, Nebraska, Notre Dame and Penn State -- had slipped into mediocrity in recent years and entered this season hoping to resume their winning ways. All seemed to be improved entering Saturday, but each faced what looked like a major test.

For Notre Dame, Alabama and Penn State, the games were never close. Each team faced a ranked opponent, and they won by a combined score of 124-45. Seems like old times.

To the Irish, Saturday's victory meant much more than merely snapping a two-game losing streak against Purdue. Prior to the season, most analysts doubted that the Irish would be able to emerge from their challenging first six games with a winning record. However, the victory over the Boilermakers clinched just that. Now, Notre Dame is an upset of USC away from starting 5-1.

Alabama's win over Florida was its first home victory over a top-5 team since beating Penn State in Birmingham in 1982, and it was the first ever for the Tide in Tuscaloosa. Since Tennessee and LSU also will visit Bryant-Denny Stadium in the coming weeks, Bama might even get an opportunity to do it again. For now, though, the Tide players have a bye week to savor their first taste of being a real contender in the SEC.

Speaking of contenders, Penn State is suddenly one of two remaining unbeaten teams in the Big Ten and welcomes Ohio State to town this week for what could be a defining game in the conference title race. My, how things change! At one point last season, the Nittany Lions were 0-6 in Big Ten play and 2-7 overall. Penn State has since won seven straight games, and for those scoring at home, only USC (26) and Texas (11) currently have more consecutive wins.

No, not Florida being held without a touchdown. Not Texas Tech playing an opponent with a pulse. I'm talking about the Big 12 North taking its first baby steps on the road back to respectability.

Last season, North teams were 0-16 against teams from the Big 12 South not named Baylor. And after Texas began the opening day of conference play by routing Missouri in Columbia, there was a certain feeling of deja vu. Not long after that, though, Colorado finished off an impressive 34-0 win at Oklahoma State, ending the North's slide at 17 games. (Big sigh of relief from the commissioner's office.)

But all good things must come to an end. On Saturday evening, Oklahoma beat Kansas State, 43-21, and Texas Tech beat Kansas, 30-17. Now, the streak's back to two.

CONFERENCE CALL
It took OT in both cases, but preseason conference favorites Tennessee (last Monday at LSU) and Michigan (Saturday at Michigan State) managed to avoid the always foreboding 0-2 start in conference play.

As you might expect, it's difficult to win a conference title after starting 0-2. Throughout the history of college football -- including leagues that no longer exist -- only three teams have started 0-2 in conference play and finished as champion. All three have occurred in the last three odd-numbered seasons.

In 1999, Colorado State dug out of that hole to finish in a tie for the Mountain West title and won the tiebreaker to represent the conference in the Liberty Bowl that year. In 2001, LSU overcame an 0-2 start to win a tiebreaker in the SEC West and then upset Tennessee in the conference title game. Kansas State did the same out of the Big 12 North in 2003 and claimed a shocking title-game win over No. 1 Oklahoma.

A few teams are already 0-2 in conference play this season, but if the trend holds true, one of them might not be out of it just yet.

INSIDE THE NUMBERS
Key Stat
13
The number of consecutive games USC has won against ranked teams since losing to No. 17 Washington State on Oct. 5, 2002.