It's not just that Rutgers fullback Brian Leonard slid headfirst down a metal ladder when he was little.

Or that he rode his bicycle down a slide.

Or even that he attacked Mickey Mouse.

It's that he did all these things -- and plenty more of the kind -- with complete awareness and full intention.

"I was kind of a crazy kid," Leonard says.

That's the way his older brother remembers it, too, during their never-dull childhood in upstate New York. 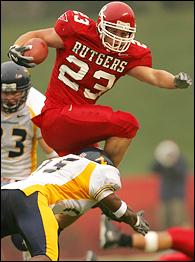 Fact is, Brian Leonard absorbed more head shots in childhood than Sugar Ray Leonard. His toughness and, uh, enthusiasm, were part of the dynamic package he brought to Rutgers, where he has established himself as perhaps the best fullback in the country and has helped the surprising Scarlet Knights to a 3-1 start (1-0 in Big East) going into Saturday's game against West Virginia. A win would allow Rutgers to start 4-1 for the first time since 1992.

When Brian was 7, Nate, three years older, accidentally cracked him in the skull with a driver at the height of a backswing. It was scored a hole-in-son, but Brian Leonard didn't cry.

No tears were shed when Brian slid face-first down that ladder from atop the family garage, either. He smiles when he shows you the scars around his bottom lip.

The Mickey Mouse incident? Yeah, we should probably get to that before we move on to how Brian Leonard blew off Penn State, Notre Dame and Syracuse to follow his star-crossed brother to Rutgers, how he matured and how he developed a signature move -- The Leonard Leap -- that is burned onto Scarlet Knights' highlight reels for eternity.

It seems ole' Mick was minding his business at Disney World, like any other day, posing for pictures with a family, when 6-year-old Brian Leonard spotted him and blitzed.

"Brian ran up, stripped off his tie and started running," Nate recalled. "I don't know who chased him down to get it back."

Whoever did must have had some wheels, because Brian could run. Still can, having clocked a 4.47 in the 40-yard dash when he was 20 pounds lighter in high school. It's all part of what makes the 6-foot-2, 235-pound junior such an enticing NFL prospect -- and such a bear to defend.

In some ways, Leonard is reminiscent of former NFL star John Riggins, a power runner who was light on his feet.

"He's a very, very underrated player," said Pitt linebacker H.B. Blades, who watched Leonard roll up 130 all-purpose yards and two touchdowns in a 37-29 Rutgers victory last Friday. "He's the best running back I've played against since I've been in college."

Leonard flies under the radar because he plays for Rutgers, which hasn't had a winning season since 1992. Yet, the College Football News picked him as the Big East Freshman of the Year and a freshman All-American two years ago.

At this rate, Leonard will post his best year yet, with career-bests of 5.4 yards per carry and 12.5 yards per catch.

Leonard constantly surprises people -- including his brother -- with his athletic ability. Nate watched in amazement this past summer, when Brian, from a standstill position with his back to a 10-foot-6 basket, jumped, turned in midair and hung on the rim with both hands.

But that was nothing compared to what Leonard does to would-be tacklers, whom he has taken to leaping over as though he were former Louisville basketball star Darrell Griffith. Leonard had one successful leap in each of the first three games, including one over a safety against Illinois that was part of a spectacular 83-yard touchdown run. His favorite occurred against Buffalo, when he jumped over a defender who was standing straight up.

Anticipating that Pitt would prepare for the move, Leonard changed his strategy against the Panthers.

"They were sitting back on their heels," he said. "They were ready to pop up and take my legs out. I knew they'd be expecting it, and I'm sure they worked in practice on how to defend that. So I decided, 'Well, I'm just going to run these guys over.'"

That he did, once steamrolling Pitt safety Tez Morris at the goal line. Leonard scored untouched on a 33-yard screen pass and later on an 11-yard reception. As always, he simply handed the ball to the official.

The kid might play a flamboyant game, but he is described as a quiet, salt-of-the-earth type by teammates and those who cover the team.

"Humble is the best word I can think of," said senior offensive tackle Sameeh McDonald.

Leonard learned humility from his parents, Mark and Laurie, growing up in Gouverneur, N.Y., which sits about 90 miles north of Syracuse and a half-hour from the Canadian border.

Nate, 24, was a star linebacker and running back at Gouverneur High and was recruited by some big-time schools before he tore his ACL during his senior year. Brian, then a freshman, wasn't expecting to play that day but replaced his brother and ran for 100 yards.

The fact that Rutgers stuck to its commitment to Nate Leonard -- who attracted interest from Wake Forest, Syracuse and Boston College -- is one reason Brian signed with the Scarlet Knights and coach Greg Schiano. Brian had dreamed of playing at Syracuse and following in the footsteps of his favorite player, Rob Conrad, after an incredible high school career that saw him amass 5,854 yards and a state-record 696 points.

But after spending 45 minutes in Joe Paterno's office and considering Syracuse and Notre Dame, Brian Leonard decided Rutgers was the place for him.

You think riding a bike down a slide is hard? Try winning at Rutgers.

"I didn't want to go to a school that already had a tradition and was supposed to win every game," Brian says. "Here, you beat Pittsburgh, the fans are on the field running around. Every win feels so much better than a win would at Penn State or Notre Dame or schools like that."

Nate and Brian never got to play together because Nate had another ACL operation, plus reconstructive surgeries on both shoulders while at Rutgers. He returned from all of that before a crushed bone in his knee finally finished his career.

Not hard to see where Brian gets his toughness from, is it?

And now that Rutgers is winning a little bit, Brian feels good about where his class will leave the program, which, with a few more big wins, will shed the Mickey Mouse label for good.

"We're building a foundation," Brian Leonard said. "People are going to remember us here for doing that."