After he threw three interceptions and lost one of his four fumbles, and after he persevered in leading Penn State for the winning score in the final minutes at Northwestern, QB Michael Robinson wowed reporters by quoting the famed abolitionist, Frederick Douglass. 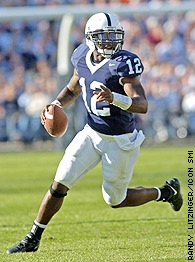 "There can be no progress without struggle,'" Robinson said.

Great stuff, but Robinson wasn't nearly so eloquent last year when he met eventual teammate and then-visiting recruit, WR Derrick Williams, after a 6-4 home loss to Iowa. The boos of the Beaver Stadium crowd still echoed in Robinson's ears on that day when Penn State scored its only points on two safeties.

So he sized up Williams and offered a plea more poignant than anything borrowed from a campus history class: "I just said, 'We need you, man,'" Robinson recalled. "'As you can see, we need you.'"

It's not even a year later, and Penn State is 5-0 and on the cusp of a no-disputing-it's-all-the-way-back victory, with sixth-ranked Ohio State headed to Beaver Stadium for a 7:45 p.m. ET Saturday kickoff (on ESPN).

For the first time in his career, Robinson, a fifth-year senior, hasn't been shuttled from quarterback to running back to receiver, "never knowing until Thursday of game week where I was going to play on Saturday."

Instead, since day one of fall camp, he's been at the controls of an offense that looks like Penn State's, because everyone is wearing those same black shoes and bland uniforms that have been a staple since even before Joe Paterno's first season as head coach in 1966.

But then the play button gets pressed on the VCR, and receivers (as many as four at once) start lining up all over the lot, there's often only one back in the backfield and sometimes (gasp) it's that Williams kid who -- don't anybody tell Joe -- is a true freshman.

Paterno used to have as much use for freshmen as he did for argyle sweaters and fashionable glasses, which is to say, of course, none.

He didn't even let them in the Penn State media guide for his first 3½ decades as head coach until those darned kids started showing up halfway through their senior years of high school to go through spring ball and hopefully impress the legend enough to play for him in the fall.

Williams took that path this past January, as did Justin King and Jordan Norwood.
Those three have teamed with redshirt freshman Deon Butler to supply a quartet of burners out wide and put the roar back in the Nittany Lions' offense.

Williams, King, Norwood and Butler have averaged 15.9 yards on their 78 collective touches rushing, receiving and returning, combining for two-thirds of Penn State's receiving yards and seven of its 10 touchdown receptions.

Already this season, the Lions have produced nine gains of 40 or more yards -- equaling the collective total from the previous two years -- and 17 plays of 30 yards or more
(four more than Penn State managed all of last season).

"It definitely is a big luxury to look out there and know that if you get it into any one of those four receivers' hands, any of them are capable of going the distance and breaking the game wide open," Robinson said. "It definitely takes a lot of pressure off my shoulders."

A battalion of chiropractors couldn't have lifted the burden off Robinson's back when Larry Johnson and Co. left town and took Penn State's offense with them following the 2002 season.

Robinson was the only discernible speed left in the lineup, and Paterno parceled him out to virtually every skill position like junior-high coaches do to the one kid who's about three years ahead of the growth curve.

Robinson couldn't have been more noticeable to opposing defenses if he'd worn a neon face mask, and the time he spent away from quarterback showed up when he tried to play the position without the proper preparation.

Try five interceptions last season, against just one touchdown pass, and 11 picks against just six scores for his career before this year.

"I definitely thought I was well-prepared," Robinson said. "I was as prepared as I could be for the situation. But now, looking back, after playing quarterback full-time this season, I realize I wasn't as prepared as I could have been because I was worried about other parts of the game, like running [pass] routes."

Robinson still suffers from the allure of turning every snap into a SportsCenter highlight, which is why he's fumbled eight times and thrown six interceptions. His nine touchdown passes, however, include three at Northwestern, where he led the Lions back from a 23-7 deficit to a 34-29 victory.

A 36-yard strike to Williams went for the game-winner and closed a drive that grew off Robinson's 20-yard completion to tight end Isaac Smolko on fourth-and-15.

Before that possession, Robinson asked a pointed question in the huddle.

"He looked us dead in the eye and said, 'What kind of football team do we want to be?'" Butler said.

Minnesota was only a speed bump in Penn State's path last week, with Robinson rushing for 112 yards, passing for 175 and playing turnover-free in what Paterno said was "probably his best game."

Now comes Ohio State -- which no one confuses with the Central Floridas, Cincinnatis or Akrons on Penn State's schedule -- and the best chance yet for Robinson and the kids he's playing catch with to show that JoePa isn't ready to be put out to pasture.

"I don't know whether this will prove that we've gotten Penn State back to where it wants to be," Robinson said. "But this is definitely a game we want to win."

Bruce Hooley covered the Big Ten for 18 years and now hosts a daily talk show on WBNS-AM 1460 in Columbus, Ohio.