When something happens three straight seasons, it stops being a coincidence and becomes a habit.

At least, it does everywhere but Iowa.

Ferentz would have everyone believe that automatics don't exist in his program, even though it sure looks like they do, given the recent past. 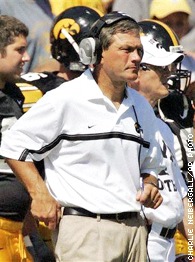 See Iowa sitting there at 3-1 in the Big Ten (5-2 overall), tied with Wisconsin and Penn State for first place in a league where 9 of 11 teams are bunched within one game in the loss column?

That's exactly where the Hawkeyes were a year ago amid a numbingly efficient run of eight straight wins that closed the season and secured a piece of the conference title.

"It's way too early," Ferentz said when reminded of that this week. "We're just trying to keep one foot in front of the other right now. And that's about as complex as we're making it."

Well, then let us complicate it for you, Kirk.

Back in 2003, Iowa lost its league opener and sat 1-2 in the Big Ten before closing with five wins in its final six games.

And in 2002, another early-season loss set the stage for an unbeaten sprint through the conference and eight wins in nine games.

That's some pretty damaging evidence that Ferentz's teams specialize in the sort of closing speed every cornerback would envy, which is why it's foolish to count the Hawkeyes out of the Big Ten despite a pair of September losses in which Iowa couldn't muster so much as a single touchdown.

Ferentz didn't panic back then, probably because he'd seen his team fall by a combined 50 points in the previous September and yet somehow fashion a rally without any of his top three tailbacks, all of whom tore knee ligaments.

Now one of those guys -- sophomore Albert Young -- has recovered to give the Hawkeyes a pretty respectable running game (182.1 yards per game) to augment the talents of quarterback Drew Tate.

Tate was the Big Ten's preseason offensive player of the year.

That looked like a laughable designation when he stuck his head into an interception scrum in a 23-3 loss at Iowa State and suffered a concussion, then lost his temper in a 31-6 loss at Ohio State and spiked the ball to take Iowa out of field goal range on one of its few successful drives that day.

Tate has since settled down, however, and is playing like the guy who almost single-handedly willed Iowa to victory last season, including a wing-and-a-prayer rescue over LSU on the final play of the Capital One Bowl.

Tate is completing 63 percent of his passes this season and has thrown for 11 touchdowns against only three interceptions.

Young, who's rushed for 100 yards or more in three straight games to reach 715 yards this season, gives Iowa a threat to keep defenses from collapsing on Tate.

No doubt, because Young is positively Ferentzian when it comes to the subject of whether Iowa has turned the corner.

"I don't know about turning any corner," Young said. "Maybe, after the bye week [following Michigan] we can talk about corners."

The Wolverines inflicted a 30-17 thumping on Iowa last season in Ann Arbor to atone for two straight losses in the series.

Duplicating that at Kinnick won't be easy, though.

Iowa has won a school-record 22 straight at home and has seemingly plugged the defensive holes that leaked oil in the Big Ten opener at Ohio State.

The Buckeyes simply overpowered a defensive line that averages only about 260 pounds per man.

Ferentz was only briefly down after that defeat before locking himself back into the every-practice-matters mantra that he's sold his team on since starting a run of 35 wins in 44 games in 2002.

"After the Ohio State game, we're kind of thinking, 'Whoa, we've got a long ways to go,'" defensive end Bryan Mattison said. "But [Ferentz] breaks it down. He's like, 'Take a step every day that you come to the football complex, whether it be lifting or whether it's practice.' That does help and it gives you a little bit of reassurance, too."

The presence of linebackers Chad Greenway and Abdul Hodge doesn't hurt, either.

Those two give the Hawkeyes valuable flexibility on defense, allowing them to play either a 4-3 or 3-4 alignment, depending on how pass-happy the opponent.

It is the least-flagged team in the nation, with 2.83 infractions per game, having suffered just 17 penalties for 117 yards on the year.

That figures, given the focus Ferentz brings to his job and seemingly imparts to his players by osmosis.

"What happened last year is not going to automatically happen this year," Hodge said. "This is a new team with a new set of guys."

But the script sure looks familiar.

Bruce Hooley covered the Big Ten for 18 years and now hosts a daily talk show on WBNS-AM1460 in Columbus, Ohio.