Injured Georgia quarterback D.J. Shockley, who has guided the Bulldogs to a 6-0 start in his first -- and only -- season as the starter, is not expected to play Saturday against No. 16 Florida. 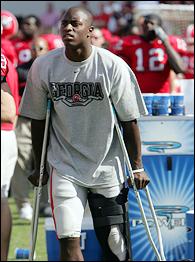 "I know its going to hurt him not to play," Georgia coach Mark Richt said Sunday. The Bulldogs play the annual "Cocktail Party" game against bitter rival Florida in Jacksonville.

Joe Tereshinski is scheduled to be the starter for the Bulldogs, and Richt has put the playbook in his hands.

"Everything we have been doing is certainly not too hard for [Tereshinski] to comprehend," Richt told the Atlanta Journal-Constitution for Monday editions. "What is going to be important is how everybody else plays around him. If you protect him, he will have a chance to find some [receivers]. If we give him some type of running attack it will help him."

Richt said there would be an emphasis to try and remain a wide-open attack -- but different
than what the offense can do with Shockley at the helm.

Shockley, who sprained the medial collateral ligament in his left knee early in Georgia's 23-20 victory over Arkansas on Saturday, will not neet surgery, Richt said. The coach believes Shockley will be able to return for the Bulldogs' next game, Nov. 12 against Auburn at home.

Shockley was injured with about 10 minutes left in the second quarter against Arkansas when he attempted to scramble up the middle on a third-and-15 play.

The senior went down awkwardly and remained on the ground for nearly a minute. He finally hobbled to the sideline and was in obvious pain as the training staff worked on his knee.

Before the half was over, Shockley limped to the locker room, receiving a standing ovation from the Sanford Stadium crowd.

Shockley had spent the past three years backing up David Greene, the winningest quarterback in major-college history.

Coming into the Arkansas game, Shockley was the top-rated quarterback in the Southeastern Conference and 13th nationally. Before he was hurt, he gave Georgia an early lead with an 11-yard touchdown pass to Bryan McClendon.

Tereshinski took over for Shockley and will spend the upcoming week preparing for his first career start against a team the Bulldogs have beaten only twice in the last 15 meetings.

"I don't want to do anything to make this team lose," Tereshinski told the Journal-Constitution. "The big thing is to go out there and know my assignments and do my job. I don't want to overanalyze, try and catch balls for receivers, or do stuff that is beyond my control.
"