NEW HAVEN, Conn. -- Yale is banning drinking games from this year's football game against Harvard and will shut down all tailgate parties after halftime, a move some alumni say could put a damper on one of college football's oldest and most storied
rivalries. 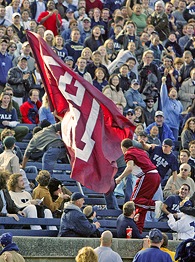 The rules to discourage binge drinking at the Yale Bowl will take effect Nov. 5, when Yale faces Brown, but they are clearly aimed at the most raucous event of the season: the Nov. 19 Harvard-Yale game.

The Ivy League contest, known simply as "The Game," dates to 1875 and draws nearly as many fans outside the stadium as inside. Students and alumni fill U-Hauls with kegs, grills and hard liquor
and set up elaborate buffets under party tents. Some parties serve
up domestic beer; others offer champagne and shrimp cocktail.

"Our major concern is for the health and safety of our
students," said Betty Trachtenberg, Yale dean of student affairs.
"Perhaps over the years those concerns had been lost sight of."

Harvard tightened its rules last year, requiring wristbands to prove people were old enough to drink. The school also limits the amount of alcohol that can be brought into the tailgate area. Yale
followed suit this week, issuing eight new rules.

Among other things, drinking games will be banned along with
related paraphernalia, such as the tables used to play beer pong.

"We don't want to send hordes of students to the hospital after each game. Drinking games are meant to get people drunk," Trachtenberg said.

For alumni, the biggest change will be the early closing time for tailgate parties, said Patrick Ruwe, a 1983 graduate and the president of the Yale Football Association Board.

"I think it will have an effect on the character of the game, independent of alcohol, just for tailgating with families," Ruwe
said.

Brian Ameche, a 1975 graduate and former defensive end, said:
"Unless you have a personal interest in the game -- you're a former player or you have a child who's playing -- it's as much about the tailgating as it is about the game of football."

New Haven Police spokeswoman Bonnie Winchester said that while
there have been no "remarkable" problems at Yale in recent years,
the department welcomes Yale's new rules.