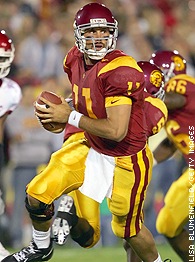 Matt Leinart has passed for 3,017 yards through 10 games in 2005.
It's not enough for USC just to be called the greatest offense in college football history. Apparently, the Trojans feel the need to prove it.

In Saturday's game versus Cal, three SC players reached key statistical plateaus and, in the process, helped the offense go where no offense had ever gone before.

Well, they can actually do more, because Steve Smith currently sits at 858 receiving yards with three games still to play. Just think about that. Two 1,000-yard rushers, two 1,000-yard receivers and a 3,000-yard passer. It seems almost certain to happen, and it could be done in as few as 11 games.

And as if the Trojans don't have enough team accomplishments already, they can add yet another record to their résumé this coming Saturday against Fresno State. Against the No. 16 Bulldogs, USC can win its 15th straight game over a ranked opponent. That would tie for the longest such streak in history, currently held by Oklahoma under Barry Switzer (1973-75). No other program has ever won more than 12 straight games against ranked competition.

Meanwhile, USC enters its 30th consecutive week atop the AP poll, which is nine longer than anyone else has ever stayed there. Whether the Trojans win a third straight national title or not, there is no denying the significant perch on which Pete Carroll's teams will sit in the annals of college football.

ROAD RULES
In a conference where the top seven programs all have a stadium that seats more than 80,000 fans, you would think there should be a significant home-field advantage. That is clearly not the case in the SEC -- at least not in some of its best rivalries.

Both the LSU-Alabama series and the Auburn-Georgia series have been dominated by the road teams in recent years -- and the trend continued on Saturday. After Auburn's 31-30 victory in Athens, the home team has now won just eight times in the last 30 meetings between Auburn and Georgia (only three times in the last 14 games). The LSU-Alabama matchup is equally baffling, with the home team having won just five of the last 24 meetings after LSU's thrilling 16-13 OT decision in Tuscaloosa.

That win allows LSU to control its destiny in the SEC West race, and the best news for the Tigers is that they go back on the road this week to face Ole Miss. Believe it or not, the home team has won only three of the last nine games in this series.

Auburn returns home to play Alabama in the Iron Bowl, and you probably guessed by now, that the Iron has been unkind to the host team of late. Five of the last six Alabama-Auburn games have been won by the visitor.

"There's no place like home" may apply in Kansas, but it doesn't hold water in the SEC.

YEAR TO REMEMBER
As the final few weeks of the season play out and determine which teams will participate in the Bowl Championship Series, let's not forget that there's more to college football than major bowl games. A few teams you'll never see in the BCS Standings are exciting their fans with special 2005 seasons, even if most of the country hasn't noticed.

Let's start with the University of Central Florida, which went winless last year under new coach George O'Leary. The Golden Knights then opened this season 0-2 with losses at South Carolina and at South Florida, stretching their losing streak to 17 games. Since that time, though, UCF has gone 7-1 and now sits atop the standings of Conference USA's East Division. The Knights have an excellent chance to play in their first bowl game and maybe even reach the inaugural C-USA title game, as well.

And what about Western Michigan? The Broncos are battling UCF for the greatest turnaround in college football this season, sitting at 7-3 overall after going 1-10 a year ago. The unfortunate part for WMU is that a 5-OT loss to Ball State may cost the team the division title, which would likely translate to missing a bowl, since the MAC has only two bowl spots. Nonetheless, there's been a remarkable turnaround in Kalamazoo.

The Sun Belt Conference probably won't have a team with more than six wins this season, but that won't prevent at least one conference member from having a banner year. With two weeks to play, Arkansas State, Louisiana-Monroe and Louisiana-Lafayette are in a three-way battle for the Sun Belt title and a berth in the New Orleans Bowl (to be played in Lafayette, La., this season because of Hurricane Katrina). It will be the first bowl appearance in school history for whichever team emerges as champion, and that will certainly make the 2005 season worth celebrating.