Lloyd Carr did not require the Dicky Maegle-moment thrust upon him last year in Columbus to approach a Saturday scrum against archrival Ohio State with the nervous twitch of a man tormented by some bizarre post-hypnotic suggestion.

Say the word "punt," or heaven forbid, "Ginn," to the Michigan coach this week and the recoil could be uglier than what played out in the 2004 regular-season finale. 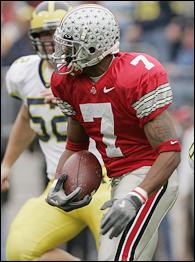 That's when Ted Ginn Jr.'s 82-yard punt return for a touchdown swung the pendulum permanently toward the Buckeyes in a 37-21 Michigan loss that cost the Wolverines an outright Big Ten championship.

It's no wonder, then, that Carr sounds somewhere between reverential and terrified as he talks about the challenge of neutralizing Ohio State's special teams at the Big House.

"I can't imagine anybody having better special teams than they do," Carr said. "They have guys who are explosive and have the ability to make a big play every time Ginn or [Santonio] Holmes touches the football."

Carr somehow resisted the temptation to dive, ala Alabama's Tommy Lewis in the 1954 Cotton Bowl when Maegle streaked past, at Ginn as he turboed into the end zone and transformed a 20-14 OSU lead into a runaway.

Maybe that's because Carr was too busy pondering the irony of the Buckeyes doing to Michigan what Desmond Howard and Charles Woodson did to Ohio State in almost exactly the same fashion.

After all, both Howard and Woodson punctuated their respective Heisman Trophy seasons of 1991 and 1997 with extended punt return touchdowns against the Buckeyes, with Howard going for 93 yards and Woodson going for 78.

So for all the chatter over quarterbacks Troy Smith and Chad Henne, linebackers A.J. Hawk and LaMarr Woodley, and everyone else lining up offensively and defensively, the outcome could hinge on one eye-blink exchange of possession.

"The thing that's hard about special teams, it's a one-play series," Ohio State coach Jim Tressel said. "On offense, if you throw incomplete on first down, you've got two more tries. On special teams, you'd better do it right on that play."

Holmes and Ginn allow their teams to win that battle most of the time. Steve Breaston fills that role for the Wolverines.

Each ranks among the top five in the league in punt returns.

Ginn has six career punt returns for touchdowns, compared to three for Breaston.

Ginn started running back kickoffs this season and ranks second in the league at 29.6 yards, with one going the distance. 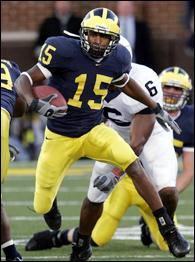 Breaston took one kickoff back for a score this year as well, and stands fifth in the league with a 26.9-yard return average.

"He is smooth," Ohio State's Nate Salley said of Breaston. "When he runs, he tilts his head back and he has these long strides. But he also pulls away from guys. He's a great player."

Breaston's talents were never more evident than in the Rose Bowl loss to Texas last season, when he ran back six kickoffs for a 37-yard average.

That was, of course, until Saturday's performance against Indiana, when he parlayed getaways on both punt and kickoff returns to total 201 all-purpose yards by halftime.

Holmes jump-started Ohio State to its 48-7 win over Northwestern last week with a 35-yard kick return and a 24-yard punt return, both of which set up early touchdowns.

Ginn's escape last season threw things the Buckeyes' way, even though Carr had inserted Braylon Edwards on punt coverage that week in a preemptive strike against that very possibility.

"When Teddy was able to get that punt, that gave us all the momentum," OSU's DE Mike Kudla said. "We just kind of took that and ran with it. Any type of return we can get or any that they get, it's going to be a huge factor."

Perhaps, even, the deciding factor.

"Those coverage teams," Carr said, "are up against it this week."

Bruce Hooley covered the Big Ten for 18 years and now hosts a daily talk show on WBNS-AM 1460 in Columbus, Ohio.