Before ESPN2 picked up Saturday night's Clemson-South Carolina showdown, the game was scheduled to be shown on pay-per-view.

Which seemed appropriate. After all, aren't the best fights usually available only on pay-per-view? 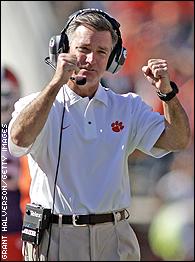 But anyone expecting to see a rematch of the ugly brawl that broke out in last year's game between the Tigers and Gamecocks might be disappointed.

The aftermath of last season's free-for-all -- including 12 player suspensions and the decision by both schools to forfeit bowl invitations -- promises to keep everyone on his best behavior. Players from both teams will meet at midfield of Williams-Brice Stadium before kickoff and shake hands.

"We're both good teams trying to go to bowls," said Tye Hill, Clemson's standout senior cornerback. "I don't think we want to go through what we went through last year watching everybody else playing bowls while we were home. We both want to win the game, but I think both teams are going to see the bigger picture."

A victory over No. 19 South Carolina would give Clemson two consecutive wins against ranked opponents for the first time since 1988.

The first came last week in Clemson, where the Tigers put a 35-14 beatdown on No. 17 Florida State in a game that was more lopsided than the score would indicate. Clemson coach Tommy Bowden called defeating his father -- FSU coach Bobby Bowden -- a "hollow feeling," but there were no mixed emotions among his players, who secured bowl eligibility with the win.

The postseason was no certainty for Clemson a few weeks ago after it followed a 2-0 start with three straight losses, including two at home in overtime.

The close calls continued a maddening trend for the Tigers that began last season. Clemson is 11-5 in its last 16 games, and the five losses have come by six or fewer points. In four of those five defeats, the game-winning points were scored in the final 33 seconds. This season, the Tigers' four losses -- all in the ACC -- have been by a total of 14 points.

"To know how good you can be but then keep coming up a hair short is very frustrating," said Hill, a semifinalist for the Jim Thorpe Award. "Those type of games give you high blood pressure. I've been involved in too many of them. But you just have to keep going and hope that one day the dice start rolling in your favor."

Clemson's fortunes might be taking a turn for the better. The Tigers manhandled FSU this past weekend, holding the ACC's top-ranked offense to 226 totals yards, with six sacks and two interceptions. The Seminoles did not score an offensive touchdown.

When FSU battled back from a 14-0 deficit to tie the score at halftime, Clemson responded with a 21-point third-quarter barrage featuring two Charlie Whitehurst touchdown passes.

"Maybe we proved we can finish off good teams," said Whitehurst, who overcame lingering pain in his throwing shoulder to complete 21 of 32 passes for 269 yards and three touchdowns. "That was something we couldn't do earlier in the season."

Which brings us to Saturday's game in Columbia.

The Tigers and Gamecocks have been playing for 103 years, and the antipathy between the two teams has lasted just as long.

Then you might not know that the series was called off for six years after the 1902 game -- a 12-6 South Carolina victory -- when Clemson cadets marched near the South Carolina campus with "fixed bayonets and swords drawn," according to the book, "A Century of Gamecocks Memorable Football Moments."

Last year's game was an even nastier affair. With benches emptying, the brawl rolled down the field for 60 yards, with coaches, police and other security personnel almost helpless in their attempts to break it up.

Among the lowlights were South Carolina's Daccus Turman cold-cocking Clemson's Duane Coleman and the Tigers' Yusef Kelly kicking a Gamecocks player on the ground.

"[The] subject of the brawl has not come up hardly any," Bowden said this week. "I think my players learned a valuable lesson. I know I did. I was very embarrassed by what happened."

On Saturday, Bowden will get a chance to become the third coach to beat Bobby Bowden and Steve Spurrier in the same season, joining Tennessee's Phillip Fulmer (1998) and Miami's Butch Davis (2000). Tommy Bowden has had his way against South Carolina since getting the Clemson job in 1999, winning five of six meetings against the rival Gamecocks.