Al Borges is the first to admit that he wasn't a household name in the Southeastern Conference when he showed up on Auburn's campus in February of last year.

The reality is that he wasn't much of a name at all, at least not in the inbred world of SEC football.

But give Auburn head coach Tommy Tuberville credit. He did his homework, and the more he looked over the candidates who applied to take over the Tigers' offense, the more he was drawn to Borges. 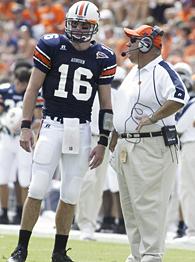 Nearly two seasons later, they both look like geniuses.

Auburn, one of the most compelling stories in the SEC this season (along with South Carolina), heads into its Iron Bowl showdown with Alabama on Saturday with the most potent offense in the league.

It should be a classic matchup.

"You start talking about some of the best defenses you've ever faced, and they're right at the top of the list," Borges said. "For anybody who just thinks that's pregame talk, I'll hand them the statistics. Only one team has scored more than 16 points on them all year.

"They stop the run, stop the pass and are very confident -- and they should be."

There's a similar air of confidence on the Plains, though, and it starts with an Auburn offense that has exceeded everyone's expectations. The Tigers mowed through opponents last year with three future NFL first-round draft choices doing the damage.

Borges helped to groom quarterback Jason Campbell into a first-rounder, but running backs Carnell Williams and Ronnie Brown were fabulous talents who would have scared the daylights out of opposing defensive coordinators in any offensive system.

But in Borges' system, which he refers to as a hybrid of Bill Walsh's West Coast offense, they were on another planet. They were also counting their NFL money this spring when Borges was faced with rebuilding the Auburn offense in just his second year on the job.

No Campbell. No Williams. No Brown.

In retrospect, Borges didn't have to rebuild anything. He just reloaded. And here the Tigers are on the eve of their biggest game of the season sporting better offensive numbers than they had a year ago.

"I'm as amazed as anyone," Borges said. "It's [a] tribute to replacing good players with good players. I never thought we would be bad. I just thought there might be a few more growing pains along the way. It's just happened a lot faster for us than I thought."

As he did with Campbell, Borges has taken sophomore quarterback Brandon Cox and made him into one of the conference's most effective passers. He's third in the SEC in passing (229.9 yards per game) and has thrown just three interceptions since throwing four in the season-opening 23-14 loss to Georgia Tech.

Borges blames himself for putting too much on Cox in the opener and asking him to throw the ball too many times.

It's no coincidence that the Tigers have leaned on the run in winning eight of their last nine games. Kenny Irons, who had just one carry in the Georgia Tech game, had 37 in the 31-30 win over Georgia last weekend.

For those who think finesse when they think of the West Coast offense, they might want to watch the Tigers line up and come off the football.

Borges is a big believer in being able to finesse teams when necessary. But coming from a guy who was running the wishbone when he was coaching in high school, he understands the importance of being able to run the football.

"The West Coast offense has changed so much and evolved so much that it's probably unrecognizable to Bill Walsh today," said Borges, who studied under Walsh as a high school coach in California during Walsh's first stint at Stanford. "There have been so many tweaks and so many variations, and what we're running now is a hybrid.

"The thing that's never going to change, though, is that if you can't run the football in any league, you're going to be in trouble. That's particularly true in this league, which is the closest to pro ball in terms of the talent of the players.

"But by the same token, you've got to be able to pass it, too, if you want to win big."

Tuberville wanted to win big, which is why he kept his eyes wide open in his search for an offensive coordinator after the 2003 season.

At the time, Borges was coaching at Indiana and had been there for two years. In his first season with the Hoosiers, they were third in the Big Ten in passing.

But before coming to Indiana, all of Borges' experience had been on the West Coast. He had stops at Portland State, Boise State, Oregon, UCLA and California. While at UCLA, he was a finalist for the Frank Broyles Award in 1997 and 1998 as the country's top assistant coach.

He tutored quarterback Cade McNown at UCLA, and the Bruins averaged more than 40 points per game in two of Borges' five seasons in Westwood and won two Pac-10 championships.

"The thing I admired so much about Tommy is that he looked at the totality of my résumé," Borges said. "If you judged me purely on what we did at Indiana, heck, nobody would have hired me.

"We'd moved the ball and scored points everywhere we'd been. This business sometimes is too perception-oriented. The guys people think are sexiest are the ones getting hired. But at the end of the day, when you're making a business decision, you're looking for the right fit.

"I think that's what happened when Tommy brought me to Auburn."

Borges was a late entry in the process. By the time he called and expressed interest in the job, Tuberville had already talked to three candidates.

"It turned out they wanted to talk to one more guy, and that guy was me," Borges said. "I wouldn't have given you a plug nickel for my chances of getting the job two weeks before getting it."

Tuberville, though, was impressed by Borges' background and liked his style. One of the stipulations in Borges taking the job was that it would be his offense.

"Everywhere I've ever been, I've pretty much had that luxury," said Borges, noting that Bob Toledo at UCLA probably had as much input as any head coach he's ever worked for.

"That took some getting used to. It was more of a 'we' thing there at UCLA, even though I was the play-caller. Most offensive coaches would tell you that they'd rather work for a head coach with a defensive background."

Which probably explains why Tuberville didn't have any problem turning the offense over to Borges.

"I wasn't the popular candidate, and I realized that at the time," Borges said. "I think after the fact, and after we had some success, is when it kind of bugged me a little bit more. But this is one of those businesses where you've just got to keep proving it."

Borges gets another chance Saturday against an Alabama defense that provides the ultimate proving ground.

"The best thing about us is that I still don't think we're a finished product," Borges said.