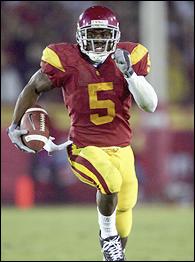 Reggie Bush posted an amazing 513 all-purpose yards against Fresno State on Saturday.
The ESPN college football crew didn't leave the office until 3 a.m. ET on Sunday, and we pity those who weren't burning the midnight oil with us.

Because if you weren't, chances are you missed one of the great individual performances in college football history.

Under a SoCal moon, Reggie Bush saved USC's bid for a third straight national title and made a major push for the Heisman Trophy in the process. He may have become the leading candidate for the award if enough voters east of the Mississippi were still awake to see it.

Bush sliced and diced his way through the Fresno State defense for 294 rushing yards and 68 receiving yards. He danced his way through the Bulldogs' special teams for another 151 yards in kick returns. Add it all up, and Bush accounted for 513 all-purpose yards -- the second-most ever in a Division I-A game.

Emmett White of Utah State, who covered 578 yards against New Mexico State in November 2000, is the only other player in major-college history to gain more than 435 yards in a game. But White's team and the opposing Aggies entered that day with seven wins between them -- a world away from the stage on which Bush performed against an 8-1 team that proved to be even better than its No. 16 ranking.

The top-ranked Trojans needed every bit of Bush's production, hanging on for an eight-point victory after intercepting a pass in the end zone with about 90 seconds remaining. On a day that featured some of the best rivalries in the sport, unfamiliar foes USC and Fresno State unexpectedly provided the main event.

And on a day when Troy Smith led Ohio State to a dramatic comeback win over Michigan  on a day when the Auburn defense sacked Alabama QB Brodie Croyle 11 times  on a day when DeAngelo Williams of Memphis became the leading yardage gainer in Division I-A history  it was Reggie Bush who stole the show.

Not that we were all that surprised.

SWEET REDEMPTION
One of the great stories of the 2005 season finished another chapter on Saturday, but it is still far from being over.

The University of Central Florida, which went 0-11 last year in its first season under head coach George O'Leary, clinched the East Division of Conference USA with a 7-1 record in league play. By virtue of having the best record in either division, the Knights will host the inaugural C-USA Championship Game in Orlando on Dec. 3.

It's a major step forward for a program that flourished in its I-A infancy with QB Daunte Culpepper before sliding into near oblivion as one of the worst teams in the country. It's sweet redemption for a coach who has traveled a similar path, being named head man at Notre Dame, only to become a national punchline after his résumé fiasco.

UCF and O'Leary are now restoring their images together, and they're doing it in a conference that seems to believe in second chances. In fact, the C-USA title game could be one giant tale of resurrection. The Knights would face Mike Price's UTEP team if the Miners can win at SMU on Saturday.

It's been that kind of season in Conference USA. The league is reshaping its own identity after losing three schools to the Big East and expanding to 12 teams. O'Leary versus Price in the championship game would be the natural way to finish it off.

ROOM AVAILABLE
With Tennessee taking a sixth loss on Saturday, the SEC will be two teams short of filling its eight allotted spots in bowl games, but it won't be the only major conference leaving an empty space or two.

Barring a Stanford upset of Notre Dame, the Pac-10 will have at least one vacancy, and it could leave two if Arizona State is upset by Arizona again. Unless Texas A&M beats Texas or Kansas beats Iowa State, the Big 12 will also come up one team shy of filling its quota. And if the Big Ten gets a second team into the BCS, as currently expected, they would have to vacate their final bowl position.

Among the top conferences, only the ACC is guaranteed to have an eligibility surplus and will likely be shipping two teams into the aforementioned openings. The Big East has four teams qualified for four spots, but it won't have any extras unless Pittsburgh upsets West Virginia or Connecticut takes down South Florida.

If all the favorites win over the next two weekends, there will be four extra bowl places for teams from the MAC, MWC, WAC and C-USA to negotiate over. Things won't be as bad as last year, though, when every eligible and available team but Akron played in a bowl game.

A 6-5 record shouldn't be an automatic ticket to the postseason, but at least in the major conferences this year, it will probably be enough.

INSIDE THE NUMBERS
Key Stat
50The number of consecutive games in which USC has scored at least 20 points.