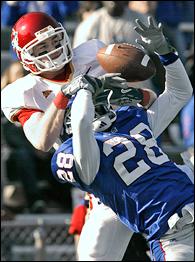 AP PhotoThe Jayhawks batted away the Cyclones' Big 12 title hopes on Saturday.
Since almost every Division I-A team with a winning record goes to a bowl game these days, it seems that just getting to one shouldn't be all that special.

That theory was destroyed on Saturday, as a few teams with nothing more than bowl eligibility on the line gave fits to opponents who were playing for much larger stakes. It further proved that any team with motivation can be dangerous in college football.

It started in Kansas, where Iowa State had a chance to clinch the Big 12 North with a win over the 5-5 Jayhawks. The Cyclones jumped out to a 14-3 lead and were on the verge of perhaps the biggest win in the modern history of their program. But KU had plenty to play for, too, and came back to win the game in overtime. The Jayhawks are now bowl bound for only the second time in the last 10 seasons, while ISU had the division title slip through its fingers for the second straight year.

In the mid-afternoon, South Florida needed a win over 4-5 Connecticut to set up a showdown with West Virginia for the Big East's berth in the BCS. Many people thought the Bulls would get little resistance from a team that had seen a once-promising season crumble because of key injuries, but the Huskies fought to keep their bowl hopes alive. UConn pulled the upset and can now qualify for a second straight bowl trip by pulling another stunner this Saturday against banged-up Louisville.

And to cap it all off, there was Stanford. The 5-5 Cardinal were playing for a spot in the nearby Emerald Bowl, while Notre Dame stood on the opposite sideline with about $13 million in bowl revenue on the line (the difference in payout between the BCS and the Gator Bowl). Watching the game, you would have thought both teams were playing for that same pot of gold. Stanford ultimately came up short and saw its season come to an end, but that performance may have been the next-best thing to a bowl appearance for the Cardinal.

CROWNING ACHIEVEMENTS
Outside of this week's conference title games, all other championships in Division I-A have been determined.

West Virginia clinched the Big East title with South Florida's loss on Saturday, and the Mountaineers are now BCS bound. Entering November, only two of the top 18 all-time winningest Division I-A teams had not played in the Bowl Championship Series: Penn State and West Virginia. Now you can scratch both off that list.

The Sun Belt race ended in a three-way tie, and the tiebreaker goes to Arkansas State. The Indians will play in the New Orleans Bowl (moved to Lafayette, La.) on Dec. 20 -- the first bowl appearance for the program, and its first postseason appearance since the I-AA playoffs in 1986.

The only conference still somewhat undecided is the WAC, where there will be co-champions. Boise State and Nevada both finished with one loss in league play, clinching a share of the title, and will be joined by Fresno State if the Bulldogs can beat Louisiana Tech this week. Because the WAC champion does not go to a specific bowl this season, there is no tiebreaking procedure.

GATOR BAIT
Because of the standard set by Steve Spurrier, a three-loss season will never be considered good at the University of Florida. But even with an 8-3 record in Urban Meyer's first season as head coach, there is a reason for the Gator faithful to be excited.

For the first time since 1995, the Gators beat their three biggest rivals -- Tennessee, Georgia and Florida State -- in the same year. Not only that, but they did it with defense, holding the three teams to a total of 24 points.

Tennessee hasn't always been considered a rival, and the Gators and Vols didn't start meeting on an annual basis until the SEC split into divisions, but it is still only the fourth time Florida has ever beaten Tennessee, Georgia and Florida State in the same regular season. Spurrier did it twice in 12 years. Meyer has done it in his first season.

Now, if he can just dominate the rest of the SEC like the Head Ball Coach did, everyone in Gatorland will be happy again.

INSIDE THE NUMBERS
Key Stat
15TD catches for Notre Dame's Jeff Samardzija this season, which leads Division I-A. He did not score a touchdown in his first two years at ND.