"I couldn't be any happier." 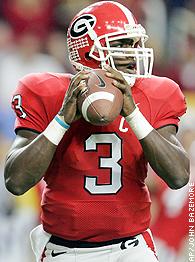 And somehow, the adulation didn't get old. Donald Shockley just sat on a folding chair, waiting patiently for his son D.J. to come out of the locker room, and soaked it all in. The hugs, the handshakes, the authoritative nods of approval. His family had waited five years for this. His son had waited a lifetime.

"This was one of his goals since high school," Shockley said. "He's talked about quarterbacking a team to the SEC championship forever. So to see him throw it like that, run it like that, I couldn't be any happier for him. I'm usually pretty quiet and calm, but tonight I couldn't contain myself."

This wasn't about the two perfectly lofted touchdown passes. Or the now-you-see-me-now-you-don't, catch-me-if-you-can, 7-yard touchdown run in the second quarter. This was about patience, perseverance, commitment. And doing the right thing.

In the me-first, I'm-outta-here-if-I-don't-get-to-play era, D.J. Shockley had gone old school. Four years ago, he had lost the starting job to a freshman by the name of David Greene, effectively sending him to the bench for three years. He could have transferred. His father thought he should have transferred. But the son stayed, hoping in the end that he'd be rewarded.

Saturday night's 34-14 SEC championship victory over LSU was the payoff. And as he stood on the victor's podium, the MVP trophy high above his head, miniature pieces of silver confetti falling on his red Georgia jersey, Shockley's electric, ear-to-ear smile revealed that it was all worth it.

"Tonight was a true test of what Georgia meant to me," he said. "Over the last three, four years, there's always that frustration because you want to play more. Any competitor wants to play. But this year and this game has been reassuring that I did the right thing. I wouldn't trade anything in the world for what we did this year."

"I was hoping you could say that," he said.

Shockley was Richt's first-ever recruit at Georgia, the high school stud who was to take the Bulldogs to new heights. But Greene had other plans. He led Georgia to its first SEC championship in two decades as a redshirt freshman, earning a permanent starting spot and a free beer in the state of Georgia for the rest of his life.

"Right place, wrong time," Donald Shockley said. "When David [Greene] took off, I figured maybe [D.J.] should play somewhere else. But he loved his teammates. He loved the coaching staff. And all along, we raised him to stay in the game. To never give up. So he did everything he could to be ready when it was his time."

In the three seasons leading up to this year, Shockley saw action in 26 games, but never started. His up-and-down appearances were hardly fair. The offense was designed for Greene. And by the time Shockley came in, everyone else was already up to game speed. It was like finally getting the keys to the family car -- but only to go fill the tank.

A broken foot further slowed Shockley in his redshirt freshman year of 2002, and a knee injury followed the next season. But he went to practice. Took notes. Insisted on taking Friday playbook tests meant only for the guys who were going to see the field.

"I told him, 'I really believe you'll leave this place with a smile,' " Richt said. "I hoped for that. I prayed for that."

Shockley's time finally came this year, but not without question. In last year's regular season finale against Georgia Tech, Shockley failed to impress after Greene went to the sideline with a broken thumb. After completing 5-of-16 passes and getting booed by the home fans, Shockley went back to the bench and Greene -- broken thumb at all -- returned to lead the Bulldogs to a field goal that sealed a 19-13 win.

That game led to an offseason of whispers as to whether or not Shockley was ready to start, nevertheless replace Greene, the winningest quarterback in modern college football history.

"I just went into this year not wanting to let my teammates down," Shockley said. "There was all this hype, could I get it done or not. I just wanted to play for them."

And they wanted to play for him.

"I dedicated this entire season to him," safety Greg Blue said. "When you look at the love he had for this program and his teammates -- you can't help but want to win for somebody like that. He could have gone anywhere. But he stayed."

In the season opener, Shockley silenced his skeptics, throwing for five touchdowns and running for another in a lopsided victory over Boise State. Georgia was 6-0 in late October when a sprained knee forced Shockley out of the Florida game. Without its leader, the offense sputtered and Georgia lost 14-10.

Shockley would return to lead the Bulldogs to victories in two of their last three games -- their only loss a 31-30 thriller to Auburn. And then came Saturday night. Though his numbers were hardly jaw-dropping -- 6-of-12 for 112 yards -- his play was solid, especially early. After a three-and-out on Georgia's first possession, Shockley lofted the first play of the second possession 45 yards into the end zone where it fell into the arms of receiver Sean Bailey. Six plays later, on Georgia's next possession, he pump-faked an out pattern and then found a wide-open Bailey in the other corner of the end zone for a 29-yard touchdown.

And before the half would come to an end, on third-and-2 from the Georgia 7, Shockley dropped back, faked the handoff, escaped a pair of LSU defenders, followed his blockers and scored another touchdown, giving Georgia a commanding 21-7 lead.

In the end, it was good enough for MVP honors. And the ultimate SEC ending to an up-and-down college career.

"D.J. needs to be commended because he's a loyal man, he's a man of character," Richt said. "He understands that the whole world doesn't revolve around him. And I'm just glad he was blessed by staying."