There's plenty for the Big Ten to puff out its chest over now that the 2005 regular season has concluded.

Given the conference's penchant for self-importance, there's no doubt the spin-meisters will get diesel VW Rabbit-style mileage out of placing two teams in the Bowl Championship Series rotation.

But as much as there is for league loyalists to trumpet regarding the 2005 college football season, there's as much to point a disappointed finger toward, given the failure of four teams to live up to preseason expectations. 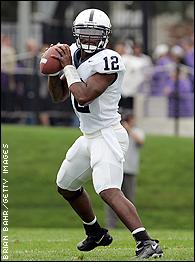 Only Penn State, the Big Ten's official BCS designee courtesy of a 17-10 victory over co-champion Ohio State, enters the postseason without a twinge of regret.

If not for a last-play loss at Michigan, Penn State would be this year's Auburn -- undefeated and unable to play for the national championship where, once again, the two teams that debuted No. 1 and No. 2 in the polls remained there all season.

The Nittany Lions weren't even ranked in either the Associated Press or USA Today coaches' polls, so to finish No. 3 in both and be bound for the battle of the ages (or is it aged?) between 78-year-old Joe Paterno and 76-year-old Bobby Bowden of Florida State is a testament to the leadership of quarterback Michael Robinson and the excellence of the defense.

But aside from Penn State's remarkable resurgence -- the Nittany Lions had lost 17 of their previous 24 games entering the season -- the story for most of the rest of the league is one of unfulfilled expectations.

Ohio State welcomed national-championship pressure in the preseason yet faded from the title picture quickly with a 25-22 home loss to Texas and the seven-point defeat at Penn State.

However, head coach Jim Tressel rallied his team to six straight wins at the finish, including a popularity-sustaining fourth victory over Michigan in five seasons. That brings the reward of a third Tostitos Fiesta Bowl in four years and a matchup against Notre Dame, which OSU has played only four times previously, twice in the 1930s and again in 1995 and 1996.

Michigan was fourth in both preseason polls, lost early to Notre Dame and suffered a debilitating string of injuries that helped doom Lloyd Carr to a 7-4 finish. That brings a record 31st straight bowl bid -- this time it's the MasterCard Alamo Bowl against Nebraska -- but ended Michigan's streak of New Year's Day bowl appearances at nine.

Iowa stole that honor from the Wolverines, despite losing at home to Michigan, because it finished with two wins to get to 7-4. The Outback Bowl folks felt more Iowans would be interested in a second straight trip to Tampa than Michigan fans moping over a fourth loss to Ohio State in five years.

Those Hawkeye faithful shouldn't be too happy, though, since Kirk Ferentz's team was No. 11 and No. 10 in the two preseason polls and had designs on a third Big Ten title in four years.

Wisconsin's Barry Alvarez will coach his final game in the Capital One Bowl against Auburn on Jan. 2, which sounds like a great reward for the Badgers' surprising championship bid that ran out of gas with a home loss to Iowa in the final week of league play.

But considering that Auburn whipped Wisconsin in the 2003 Gaylord Hotels Music City Bowl and might be playing as well as any team in the country, Alvarez might want to take over as the Badgers' full-time athletic director upon the immediate flip of the calendar to 2006.

Most Valuable Player
QB Michael Robinson, Penn State
When a team goes from unranked in the preseason to No. 3 in the polls, plenty of guys must rise up and play above their previous performance. None did so more for Penn State than Robinson, who rallied his team to victory at Northwestern in the league opener and got better each week thereafter.

He galvanized a young offense with timely scrambles and big throws when needed, scripting a stylish conclusion to a career that had been frustrating before this season.

Coach of the Year
Penn State's Joe Paterno
Wisconsin's Barry Alvarez was in the running until the final week, when a loss to Iowa kept the Badgers from getting a share of the title. That threw the entire award to Paterno, who at age 78 proved the game hasn't passed him by.

Paterno could have bailed on Robinson when he was dreadful early at Northwestern, committing turnovers that threw the Lions into a 23-9 hole. But panic has never been part of Paterno's résumé. He stuck with Robinson and was rewarded with a victory that proved to be the flash point for one of the most amazing resurrections in Big Ten history.

Penn State went 3-13 in Big Ten games the previous two seasons, but its only loss this season came on the final play at Michigan, where officials put two seconds back on the clock in the final drive to allow the last snap that kept the Lions from going unbeaten.

Newcomer of the Year
RB Tyrell Sutton, Northwestern
Northwestern freshman Tyrell Sutton gained 1,390 yards, averaged 6.0 yards per carry and scored 18 touchdowns. The Wildcats' spread offense is in good hands the next three years with the 5-foot-9 Sutton getting the tough yards that keep defenses honest.

Biggest Surprise
Michael Robinson, Penn State
Robinson entered the season having thrown for one touchdown against five interceptions last season, with six TD passes and 11 picks in his career. Anybody who saw that as a sign that he'd provide the steady hand for the highest-scoring offense in league games and throw for 16 scores against nine interceptions while compiling nearly
3,000 yards in total offense, please raise your hand.

Purdue returned 11 starters from the league's second-best defense in 2004 and had a made-to-order schedule that spared the Boilermakers games with Ohio State and Michigan. So to finish 5-6 and miss a bowl for the first time in coach Joe Tiller's nine seasons goes beyond disappointing right to someplace between stunning and inexcusable.

Bruce Hooley has covered the Big Ten for 18 years and hosts a daily talk show on WBNS-AM 1460 in Columbus, Ohio.