Boise State coach Dan Hawkins would not confirm that he's Colorado's choice as its next football coach Wednesday morning. But he didn't deny it, either. 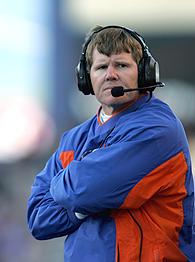 "The process is kind of moving along here," Hawkins said, before heading into a breakfast meeting with Boise State president Robert Kustra. He declined further comment.

The Boulder Daily Camera and Rocky Mountain News cited sources Wednesday saying that Hawkins was the No. 1 choice of the school, and the Boulder paper reported that he likely would be named coach by the end of this week. Hawkins said that was premature, but otherwise did not dispute the Boulder story.

Since Colorado fired Gary Barnett last week, signs have pointed to Hawkins as his successor. He was athletic director Mike Bohn's first interview Saturday, after Bohn had stated that he had a leading candidate in mind. Then, Hawkins changed plans to go on the road recruiting this week.

The only other known interview was with former Colorado player Jon Embree, currently an assistant at UCLA.

"It's been my impression from the beginning that [Hawkins] is the guy that they wanted," said Crowder, who maintains a close relationship with both Bohn and consultant Chuck Neinas, who assisted Colorado in its search.

"From everything I have heard, this is a guy who's a great community-relations builder," Crowder continued. "Unfortunately Gary Barnett, while a pleasant-enough personality, that was not his strong suit.

"He sounds like a guy who would bring kind of an interesting mystique. He didn't go to Notre Dame, he wasn't an assistant coach at USC or Texas. That tells me his native instincts and talents are pretty good, without having that built-in pedigree."

Boise State won a share of its fourth straight Western Athletic Conference title this season and is 53-10 under Hawkins. He's been a hot name on the job market for the past couple years, and Boise has enhanced his contract and the football facilities to keep him.

However, Hawkins could just about double his $525,000 annual salary at Colorado. His contract calls for an $850,000 buyout, but that will be reduced to $700,000 after this season. Should he take the Colorado job, it's unclear whether Hawkins would coach Boise in the MPC Computers Bowl against Boston College.

If Hawkins is the next coach at Colorado, it is believed that Boise would approach his offensive coordinator, Chris Petersen, about being the next coach of the Broncos. But Petersen would almost certainly have the opportunity to join Hawkins in Boulder as well.