Reggie Bush reportedly is ready to run into the NFL draft pool. 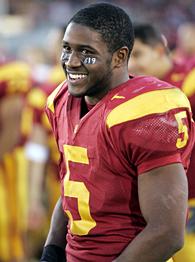 Officially, Bush, who practiced Friday for the first
time since winning the Heisman Trophy on Dec. 10, said he'll probably
announce whether he'll return to Southern California for his senior
season a few days after the Rose Bowl.

"Right now, my main focus is beating Texas," he said.

In an interview with ESPN's Shelly Smith, Bush's father, LaMar Griffin, said Bush has not yet made a decision about turning pro. However, Bush's parents said they have spoken with consultants regarding possible agents should he decide to forego his senior season.

The 6-foot, 200-pound junior figures to be one of the top picks
in April's NFL draft should he decide to pass up his final year of
eligibility at USC. Underclassmen have until Jan. 15 to declare.

The top-ranked Trojans (12-0) extended their winning streak to
34 on Dec. 3 by beating crosstown rival UCLA 66-19, assuring them a
berth in the Rose Bowl, where they'll shoot for an unprecedented
third straight national championship against No. 2 Texas.

Bush capped the Trojans' victory over UCLA by running for 260 yards and two touchdowns. When asked about Bush going to the NFL, his stepfather, LaMar Griffin, told ABC Sports: "It's time to take it to the next level."

"We're going to meet with the whole team first," he said.
"Everybody has to know what's going on. We'll focus on guys who
are under consideration. It's not time to make that decision."

The Trojans practiced last weekend, but Bush, fellow running
back LenDale White and quarterback Matt Leinart were in New York
for the Heisman ceremony. Bush and 2004 Heisman winner Leinart were
finalists, while White, who shares the tailback position with Bush,
was given permission to share the experience.

White is also a junior who is mulling his options. Despite
playing the same position as Bush, he was a third-team All-American
and holds the USC school record with 54 career touchdowns.