When his formal press conference finished up and a group of reporters gathered 'round for more casual questions, Colorado senior quarterback Joel Klatt had one last message to get off his chest.

The NCAA is garbage.

It's an organization that's "terribly run," that "exploits athletes," and that "has its priorities out of whack," Klatt said. The NCAA sells jerseys and video games with a player's name and number on it, but it won't protect the player on the field, he added. And that's something he'll hold a grudge about "for a long time."

But perhaps even more eye-opening than Klatt's scathing comments are the repercussions of his biting words. 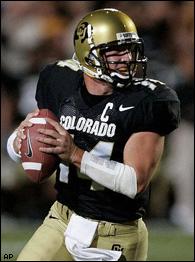 Because Klatt isn't a paid professional athlete, neither the University of Colorado, the Big 12 Conference nor the NCAA has a course of action to discipline him. Klatt is free to express himself any way he sees fit -- even if it includes criticizing the organization he's played under for the past five years.

"There isn't a recourse for us," said Damani Leech, the NCAA's associate director of baseball and football. "And I don't think anybody would want there to be. Although his comments towards the NCAA and the association seem to be negative, we encourage all comments, positive and negative."

At the core of Klatt's complaint is that college athletes deserve the same protection on the field that pro athletes receive. But ironically enough, Klatt gets more protection off the field -- at least in terms of freedom of speech -- than any professional.

If this were the NBA, you could almost hear David Stern telling Stu Jackson, his fine czar, to book a multi-thousand-dollar visit to Mr. Klatt's checkbook to ensure that the player's lips stay zipped down the road. After all, the league just fined Ron Artest $10,000 for "making public statements detrimental to the NBA." Artest's wrongdoing? Going public with his desire to be traded.

Imagine the ramifications if Klatt had gone off while he was playing for the Dallas Mavericks. The Mavs, backed up by owner Mark Cuban, made Darrell Armstrong's wallet $1,000 lighter this week after Armstrong grabbed an in-house microphone before Sunday's Mavs game and teased the Dallas crowd with a "How 'bout those Redskins?"

Or what if he'd criticized the officials as a pro? That cost Denver Nuggets head coach George Karl some $80,000 in a two-game unpaid suspension earlier this year. Washington Redskins head coach Joe Gibbs dropped $10,000 for expressing similar frustrations with the NFL's zebras this season.

Klatt's issues stem from a concussion he suffered after a helmet-to-chin hit in the Big 12 championship game on Dec. 3 against Texas. The quarterback is still having side effects from the collision, and on Monday said he is unsure if he'll be able to play in the Dec. 27 Champs Sports Bowl, his last game ever at Colorado. In addition, the quarterback is close friends with former Colorado receiver Jeremy Bloom, who was barred from playing by the NCAA after Bloom chose to accept endorsement money to help support his career as an Olympic-caliber freestyle skier.

During Monday's attack, Klatt, who holds 44 Colorado records, said the NCAA cares more about excessive celebration penalties than it does protecting its players. He said he had suffered hits that would receive fines and suspensions in the NFL "more times than I can count." The criticism reverberated all the way to the NCAA offices in Indianapolis.

Their reaction? Thank you. We're looking into it.

"I'd categorize [what Klatt said] as interesting," Leech said. "Very, very interesting. Here's somebody who feels very passionately about what he's saying. Anytime you have such strong comments from one of our student-athletes, that is something we need to look into."