On May 13, Kyle Bunch opened a forwarded e-mail and was surprised at what he saw:

"In accordance with our Intellectual Property Rights Policy, a representative for Riles & Co., the owner of the Trademark Three Peat, provided us with a notice stating that your use of the mark Three Pete infringes upon their intellectual property rights."

Because the USC Trojans have won back-to-back national football championships, Bunch had been selling "Three-Pete" shirts in anticipation of head coach Pete Carroll leading the Trojans to their third straight title. 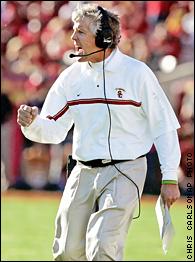 The letter was e-mailed to Bunch's T-shirt producer by Shaub, Williams & Nunziato, the law firm that represents Pat Riley, now the head coach of the Miami Heat.

In January, a group of individuals (not including Bunch) submitted a trademark application for the word "Three-Pete" to the U.S. Patent and Trademark Office. But a judge ruled that the mark was too similar to the one Riley owns. The trademarks were denied. Any use of "Three-Pete" would have to go through Riley's company.

Bunch has since stopped making and selling the shirts, choosing not to pay an estimated 5 percent sales royalty for use of the mark. That's what it will cost any other potential licensees to use it.

Legend has it that Los Angeles Lakers guard Byron Scott was the first to utter the term "Three-Peat," which became the motto of the Lakers' 1988-89 season as they began their quest for their third straight NBA title. But Riley, then the Lakers' head coach, is the one who had the insight to trademark the word.

As it happened, L.A. was swept by the Detroit Pistons in the Finals that season, which prevented Riley from capitalizing. But in 1993, the Chicago Bulls defeated a Riley-coached New York Knicks team in the Eastern Conference finals, and then went on to beat the Phoenix Suns and accomplish the "Three-Peat." When 15 of the NBA's 45 licensees that made Bulls championship merchandise used the "three-peat" mark, they put an estimated $300,000 into Riley's pocket.

"It's sort of been an interesting phenomenon," Riley told ESPN this week. "I found out that if I were ever an entrepreneurial man, I could have made some [money] in my life."

Riley cashed in again in 1998 when Bulls gear read, "Repeat The 'Three-Peat.'" And again in 2000, when the New York Yankees won their third World Series in a row. And yet again less than two years later, when the Lakers hoisted a third straight championship trophy behind head coach Phil Jackson.

Riley says he has given most of the money to charity. 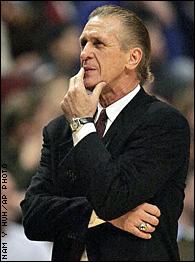 "It's like going out there and picking up a penny on the ground," Riley said. "I don't pay any attention to it. If somebody wants to license that phrase, we'll license it to them. But I don't go out and pursue it. We don't sell it; we don't browbeat anybody. If they want it, they go to somebody and they'll pay us a royalty on it."

That doesn't mean Riley's attorneys aren't actively on the prowl to catch renegade users of the mark. His attorneys didn't return calls seeking comment on how many people they've stopped over the years, like Bunch.

Should the Trojans defeat the Texas Longhorns in the Rose Bowl on Jan. 4, merchandisers can seek to get the "Three-Peat" license from Riley's company. But the gear that the school itself will sell will not utilize the moniker.

"Before the season really kicked off, we had been tinkering with the idea of how to celebrate this thing if it actually happens, and 'Three-Peat' crossed our minds," said Jose Eskenazi, who is in charge of USC's licensing program.

In the end, school officials decided to use their own motto, which they have not yet released.

As for Bunch, he hasn't given up. He's now selling shirts that say "Tres Pedros," a loose Spanish translation of the phrase "Three-Pete."

"Riley's people haven't called us yet," Bunch said. "But [the T-shirts] aren't selling, either."

Darren Rovell, who covers sports business can be reached at darren.rovell@espn3.com.