Just about every day, Mike Holder picks up the phone to check in with good buddy T. Boone Pickens. Sometimes, the oil and gas tycoon beats him to the call. They chat about energy prices and hedge funds, though conversations ultimately get around to Oklahoma State, and specifically, the Cowboys' athletic program. 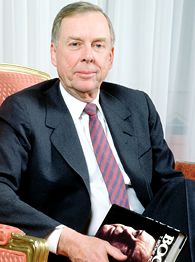 Holder, the first-year OSU athletic director, says the calls have lessened in frequency since Pickens' marriage last summer to California thoroughbred breeder Madeleine Paulson and jokes that he's "slipped down the pecking order." When told of Holder's comments, Pickens abruptly sets the record straight: "Well, he had to be joking. I talked to him every day this week. And he'll be in here at 4 o'clock this afternoon. We'll have dinner tonight."

For those without a subscription to Forbes magazine, Pickens, chairman of the billion-dollar energy hedge fund BP Capital Management, ranks amongst the 400 richest Americans. He sits at No. 207 on the latest list, to be exact -- worth an estimated $1.5 billion, and spiking upward. That's bullish news for OSU. Because while the 77-year-old Pickens shares his wealth with a laundry list of charitable causes, everything from the American Red Cross to Johns Hopkins Hospital, as well as regularly fattening the coffers of Republican Party candidates and other political initiatives -- like $10 million to the Reagan Library in October and $500,000 to help fuel the anti-Kerry campaign of the Swift Boat Veterans for Truth prior to the 2004 election -- the No. 1 beneficiary of his generosity remains his alma mater.

Asked recently how much he's contributed, Pickens (Class of '51) said with a matter-of-fact, healthy dose of bravado, "I'm over $100 million. And how much am I gonna give? I'd say, who knows. I'm meeting this afternoon with the president of the university, the chairman of the board of regents, the athletic director. And it will be 90 percent talking about money. What we need and what we're gonna do with it? No, I'll give substantially more than I am giving."

At that rate, he might as well follow the lead of Oral Roberts down the road in Tulsa and suggest renaming the place T. Boone Pickens University.

On Tuesday, Pickens gave his alma mater $165 million, the single largest donation ever to a college athletic program. And, he said, it won't be his last gift either.

His catchy moniker is already plastered all about the Stillwater campus: The Geology School. The new wing of the Sigma Alpha Epsilon fraternity house. The six guest room lodge at Karsten Creek Golf Club, overlooking the 18th fairway on arguably the finest collegiate golf layout. And the real eye-catcher, the place where the Cowboys play football on Saturdays -- Boone Pickens Stadium.

It's a love-hate relationship that binds a college and its boosters. They are often the first ones pointed to when recruiting violations surface. And the first ones called upon when facilities need an upgrade. With their money comes their two cents. Some call it influence. Others say it's meddling. ESPN.com examines the role of the college booster:

TUESDAY
• Just do it! It's not just a Nike catch phrase, it's heady advice in dealing with billionaire philanthropist Phil Knight, who lords his money over his alma mater.
• Money talks: Giving $100 million to his alma mater does more than get Boone Pickens' name on OSU's football stadium, it buys him decision-making influence.
• Corporate $upport: Joe Malugen didn't graduate from Troy University, but he saw the giant-killing football team as a marketing vehicle for his company.

WEDNESDAY
• Wave of support: In the wake of Hurricane Katrina's devastation, Tulane's athletes have served as roving ambassadors for the storm-ravaged university.
• The high price of supply and demand: The face value of a seat at a college football game is but a fraction of its real cost, thanks to mandatory donations tied to season-ticket sales.

THURSDAY
• A Tiger of a trustee: He might be slight of frame, but none throws his weight around like the Most Powerful Booster in college sports.
• Power Brokers: The power to pull strings isn't always decided by those with the fattest wallets in ESPN.com's top-10 list of college boosters.

More than half of his money goes toward athletics, the majority of that to OSU football. And while Pickens first gave $1 million to the geology department 20 years ago, the serious money has coincided with mammoth gains from BP recently.

He and his old fraternity brother, Sherman Smith, a Tulsa oil drilling contractor, just split the $3 million tab to install new football turf and spruce up the locker room. He'll likely pay off his $20 million commitment to the ongoing football stadium expansion project this year. Next on the agenda, he reveals, are designs for an athletic village to house Olympic-sport facilities. "I probably shouldn't mention that, but it is half-ass public already," cracks Pickens, a Dallas resident who also owns a 30,000-acre ranch in the Texas Panhandle.

Pickens' had previously pledged $30 million to help the university secure about 100 acres of land for the village, which is expected to more than $700 million when completed. As you'd expect, some Stillwater locals are breathing fire over visions of bulldozers clearing a path through about 310 houses, duplexes and apartment buildings -- all for a Pickens-backed plan to spruce up OSU's jock facilities.

But this isn't a guy walking on eggshells -- if he ticks somebody off, then so be it. Few boosters, if any, write as many fat checks. Thus, few bear as much direct or indirect influence over an athletic department, even though Pickens' daily hustle to turn a buck doesn't afford him time to sit on boards and committees.

In this case, Pickens doesn't have to micromanage the athletic department. Not when one of his close friends and quail-hunting partner is the athletic director. Over the past two hunting seasons, they've talked about Holder's broadening his reach and going after the AD job. Holder also invests with him, and Pickens says he's done "very well." Consider this: How many golf coaches -- even ultrasuccessful types like Holder -- work their way up the ladder to run a major Division I-A sports program?

"Oh yeah, sure I recommended him," says Pickens, who gave OSU's commencement address last month. "I mean he was the guy. No different than I was the guy when they had to go for the big bucks."

What kind of bang for his buck does he want? Just wins, baby. And, of course, to be heard when it comes to hiring and firing coaches. Like he was when former OSU quarterback Mike Gundy, a favorite, landed the head coaching gig after last season.

Beyond a football program that's tasted only occasional success, Pickens is high on the athletic fortunes of his 'Pokes. He gleefully trots out his research, culled by Texas alum Bobby Stillwell and some other Dallas office hands, showing that OSU leads the Big 12 with 46 NCAA titles -- highlighted by dominance in wrestling (33) and golf (9) -- followed by Texas' 43 and on down the list to Kansas State with zilch. But, as you'd expect of any moneyed booster, he's troubled by a flagship football program that's yet to win big.

"What does that tell you?" says Pickens, who passed on buying into the New Orleans Saints in the 1980s. "It tells you we're pretty competitive in everything but football. Yeah, we've had some good years but a lot of bad years. And I want to see that more consistent. ... We got to get everybody on board. And hell, I'm 77 years old, so I'm not on a five- or 10-year plan." 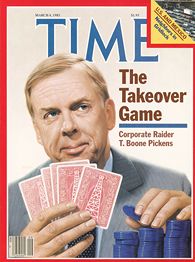 What is his plan?

Holder is versed in the plan, acknowledging most of his conversations with Pickens begin the same way: "Got any good news about the football team?"

And Gundy, the young football coach? Pickens obviously has his ear, though he isn't sending down plays from his skybox perch above the 50-yard line.

"I don't say, 'Hey Mike, I'd run the wideout more or something or other,'" Pickens offers. "I don't know anything about football. I never criticize anything. I will say it didn't look like they were ready to play or something like that. That is as far as I go. They don't need somebody looking over their shoulder commenting. They know I am here."

But he adds: "I want to know what is going on. If we have a coaching change I want to be one of the first to know about it. If anybody is leaving or coming in, I sure want to be in on helping pick that person."

Nobody should be offended when he puts his two cents in, either.

"I am a successful guy," says Pickens. "I mean, it isn't like somebody who doesn't know what they are doing is getting involved. I know how to win. I have won before. And I win every day in the business I am in. I don't find sports a helluva lot different than business. You don't go out there to lose."

No, not Boone Pickens. Not when the stadium bears his name.