TROY, Ala. -- Not all boosters run around town singing their school's fight song. Or dressing like colorful clowns on football Saturdays.

Some like Joe Malugen, current sugar daddy to Troy University's upstart Division I-A squad, never set foot in a class on campus. His roots, in fact, trace to the University of Missouri (Class of '73). So here, in a rural southeast Alabama town of about 15,000, boosterism has nothing to with emotional ties and everything to do with smart business. 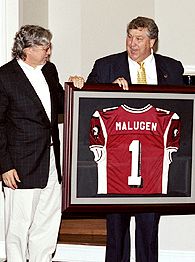 And let it be noted the dough isn't coming out of Malugen's pocket, but the coffers of his video rental company, Movie Gallery -- No. 2 in the business behind only Blockbuster.

Two years ago, Malugen signed a $5 million marketing deal with Troy to name its freshly renovated stadium Movie Gallery Veterans Stadium. Malugen fancied it as a way to tie the company's name to a sports team -- a Trojan program flush with a pair of NCAA Division II national titles that aspired to tee it up with the big boys -- and also curry favor in the local community, where Movie Gallery is headquartered just an hour down Highway 231 in Dothan.

Years ago, Syracuse kicked off the football naming rights deals with the Carrier Dome, followed by Louisville and Papa John's Stadium and Texas Tech's SBC Stadium. And now comes Troy.

"We sort of rolled the dice and did the deal, and what we found was the impact was greater than we anticipated," says Malugen, the Movie Gallery chairman and CEO. "And I think that is probably due to the TV coverage we have gotten of the stadium. And, of course, one of the good things is we picked a good horse to ride. Troy University is kind of a Cinderella-type team. They have had some great successes beating Marshall and beating Missouri [in 2004]. They sort of delivered in doing what they said they were going to try and do.

"Obviously if they'd gotten blown out in every game I probably would be less excited about it. They've been on national and regional TV quite often, so that Movie Gallery Stadium, logos and all, has certainly gotten around the southeast."

This fall's 4-7 Troy squad didn't prove quite the entertainment buy, yet Malugen can't say much after a steeper-than-anticipated downturn in the movie rental business resulted in $12.5 million third-quarter losses for Movie Gallery. Both sides are in this for the long haul anyway, thanks to the 20-year naming rights deal.

So what does Movie Gallery get for Malugen signing on? For starters, Suite 509, a 20-seat skybox perched squarely above the 50-yard line, outfitted with movie theater seats and posters from "Radio" and "Remember the Titans" hanging on the walls. The company this fall leased a larger, 40-seat skybox that's near the 25-yard line.

Malugen also sits on the Troy University Foundation's Board of Directors, the major fund-raising arm of the university. According to the most recent IRS Form 990 filed last year, the foundation has $32 million in net assets after having issued cash grants of almost $5.5 million -- $3.4 million of it going to the athletic department.

When Troy went looking for an athletic director last fall, Malugen was called to serve on the eight-person search committee that eventually hired Steve Dennis, an Auburn football assistant before becoming associate director of Tigers Unlimited, the athletic department's development office in 2003.

Around the same time, Malugen proved the closer, the man of money and influence, as Troy landed its first-ever bowl appearance in the now-defunct Silicon Valley Classic in San Jose, Calif. Malugen worked the phones politicking right alongside athletic department folks. At one point, he fueled up the company jet and flew down to lobby Shreveport bowl officials with head coach Larry Blakeney, interim AD Scott Farmer and sports information director Ricky Hazel.

After a Shreveport bid failed to materialize, Troy landed its deal in San Jose. Malugen swears it wasn't a case of quid pro quo, yet soon after the bid was announced Movie Gallery stepped in as the bowl's presenting sponsor. At the very least, the company helped cover a large portion of Troy's cost. The actual bowl payout was a measly $50,000 or so, thus an arrangement was worked out for Troy to get all but $50,000 of the Movie Gallery $200,000 sponsorship deal.

"I'll tell you, it was very pleasant having Joe Malugen by our side, knowing wherever Troy went he wanted to be involved," recalls Farmer, who's now Troy's senior associate athletic director. "We couldn't have had a better partner."

Malugen says he doesn't meddle in the day-to-day affairs of the athletic department, and by all accounts that's true. When he does offer an occasional thought, it's usually about scheduling -- Troy has an ambitious, if not downright silly nonconference road stretch next season at Florida State, Georgia Tech and Nebraska -- and down the road perhaps upgrading its Sun Belt Conference affiliation.

Troy chancellor Jack Hawkins Jr. says the university has no trepidation dealing with outside corporate types such as Malugen and Richard Scrushy, former HealthSouth founder and CEO. Hawkins buys into the grander sports profile as a vehicle to bring name recognition and push his vision for a global campus; Troy currently has a physical presence in 13 countries.

Perhaps even more pressing is the necessity to find and attract diverse revenue streams to keep the university running, which is true of most universities not named Harvard or Yale. When Hawkins came to Troy almost two decades ago, he says 43 percent of his budget was derived from the state. Today, the number is only 23 percent.

So there'd be no big-time athletics if not for corporate checks signed by Malugen and Scrushy. And, as an acknowledgement, displayed prominently on a wall in the athletic department offices are enlargements of the original checks they wrote.

Scrushy -- who still faces civil claims after a June acquittal on federal fraud charges in the $2.7 billion overstatement of earnings at HealthSouth, the chain of rehabilitation hospitals he helped found -- provided the seed money spawning Troy's move to I-A. Hawkins had personally lobbied Alabama Gov. Fob James for Scrushy's appointment to the Troy board of trustees. And you find the football field still bears his name, if you look hard enough.

It was at a 1998 meeting at the HealthSouth headquarters in Birmingham that Scrushy pushed Troy trustees to take the sports teams to the next level.

"We were wrestling with, 'Do we go I-A?'" Hawkins recalls. "Right in the middle of the meeting, Richard slapped the table and he said, 'I'm good for a million dollars.' And the hands went up and we went I-A."

In Scrushy's case, there was an emotional attachment because his wife and an uncle graduated from Troy. For Malugen, at least initially, it was bottom-line business.

"I see the athletic programs as really the marketing department for the university," Malugen offers. "I feel like these universities are really a brand. Just like a Movie Gallery brand or the Hollywood Video brand. Just like the ESPN brand.

With rare exceptions, more and more schools are happy to play the game.