NEW YORK -- For the better part of the last five days, Tom Zbikowski has been dreaming about the possibility of making his professional boxing debut at the legendary Madison Square Garden.

But not until Wednesday afternoon, a few minutes past 1 p.m. to be exact, did it actually hit him. That's when the Notre Dame All-American safety, led by a Madison Square Garden security official, walked through the player's tunnel and onto the floor of the empty, quiet, dimly lit 20,000-seat arena. 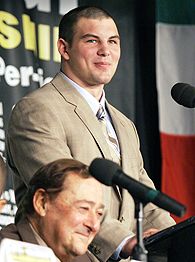 Once there, Zbikowski walked in miniature little circles, his eyes darting around in amazement. It is in this arena where Muhammad Ali, Joe Louis and Joe Frazier all fought, this arena where Michael Jordan torched the Knicks and this arena where everyone from Led Zeppelin to Frank Sinatra performed.

"I don't know what to say," Zbikowski said to no one in particular, staring up to the rafters. "I might actually be nervous for the first time in my life. I might actually get some butterflies."

He won't be alone. The decision to allow one of the key members of Notre Dame's defense to box on the undercard of the June 10 Miguel Cotto-Paulie Malignaggi fight is likely to elicit those same anxieties from Indianapolis to South Carolina to Chicago to the living room of every Notre Dame football fan.

In Indianapolis, the nerves will come from NCAA officials, who decided late Tuesday to allow Zbikowski to pursue his passion for boxing and retain his eligibility at Notre Dame, as long as he doesn't take sponsorship money, endorsement money, or get involved by promoting any boxing products.

In South Carolina, the uneasiness will come from Notre Dame coach Charlie Weis, who also signed off on the idea when Zbikowski approached him last Friday and will watch the June 10 fight from a previously scheduled fundraiser he has in the Palmetto State that day.

"The thing about him getting hurt is, you can get hurt going water skiing," Weis said Wednesday in South Bend. "My whole concern was his eligibility. I told him I would support him as long as I got the clarification that he wouldn't lose eligibility. That was a bigger issue than a guy getting hurt who has already been in the ring 90 times."

In Chicago, the worry will come from family and friends, who have watched Zbikowski fight at Windy City Gym on the city's South Side since he was nine, but wonder what will happen when he takes the headgear and shirt off and fights as a professional.

And in the living room of every Notre Dame football fan, the concern will be that Zbikowski, the playmaking safety and punt returner for an Irish team that many believe could compete for a national championship, will get injured.

Zbikowski himself has a message for such Irish football fans.

"I'm not going to get hurt," Zbikowski said. "Just tell them to look at the size of my head. They can check my X-rays to see how thick my skull is. Nothing's going to happen."

The reality is Zbikowski's already been boxing as an amateur since he arrived at Notre Dame. Since his 90-plus fights as an amateur preclude him from boxing in the school's charity Bengal Bouts, he's fought in three or four amateur fundraisers during his time in South Bend, training in a gym beneath the old football coach's office.

Zbikowski fought in one such fundraiser March 15 and will box in another on March 20 to help raise money for cystic fibrosis. Which helps explain why, when Zbikowski walked into Weis' office last week seeking permission to turn pro, the Notre Dame coach knew exactly what he wanted before Zbikowski even spoke.

"I took one step and he said, 'What did you do now?' Zbikowski said. "Then I took another step and he goes, 'It's about boxing, isn't it?' But as soon as I showed it to him, showed him Madison Square Garden, he understood. He's a Jersey guy -- he gets boxing at the Garden." 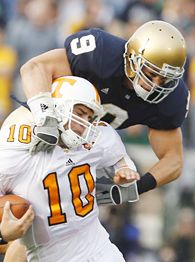 Zbikowski said he told Weis that he wouldn't miss any practice or conditioning time. He said his coach told him not to worry about it. So on Wednesday, when his teammates were continuing with spring workouts, Zbikowski was in New York City, sitting in the Madison Square Garden Theater alongside Cotto and Malignaggi, helping to promote the June 10 Pay-Per-View event.

"It didn't surprise me. It came as absolutely no shock," Weis said. "If you knew this kid, you would understand why. First of all, he didn't tell me. He asked me. He didn't come in here and say, 'I'm going to do this.'

"Thank God, it's not Oscar De La Hoya or Thomas "the Hit Man" Hearns. I don't even know who he's fighting."

After introducing the 20-year-old Zbikowski by mispronouncing his last name, saying, "Zibowski," boxing promoter Bob Arum of Top Rank brought the heavyweight to the podium to the sound of the Notre Dame fight song.

Twice Zbikowski tried to step up to the podium and speak but was drowned out by the music. "Cheer, cheer for old Notre Dame " Finally, when the song stopped, he spoke to the roughly 150 media members and boxing fans in attendance.

"I'm not sure if I should say this," Zbikowski told the audience. "But I would have done this for free to fight in Madison Square Garden."

Instead, he will be paid an undisclosed amount that his father Ed categorized as "significant." Zbikowski signed a three-fight deal with Top Rank to fight on June 10 and then two more times after Notre Dame's 2006 season is complete, likely during the spring and summer of 2007. Zbikowski has two years of eligibility remaining with the Fighting Irish.

"But let's not worry about any of that," his father Ed Zbikowski said. "He's got to win this fight first."

Arum believes that Zbikowski's decision to box professionally -- and the attention it will bring the sport -- could be groundbreaking for the development of the heavyweight division. He said the most popular question he is always asked is why there are few great American heavyweights.

"And that's because we lose them to football, to basketball even baseball," Arum said. "But here's one kid we won't lose. Here's one young man who feels he can have both. And there will be others like him down the road. They're going to see Tommy Z and realize you can do both."

Which is why, Arum said, he and his staff worked tirelessly with the Notre Dame athletics department and the NCAA to ensure that anything Zbikowski does in the ring won't jeopardize his playing status with the Fighting Irish.

That means you won't see Zbikowski on any posters or television commercials promoting the fight. Nor will you see his name in giant lights on the Madison Square Garden marquis.

"Anything Notre Dame or the NCAA asked of us, we agreed to," Arum said. "Trust me -- I don't want to be the guy to jeopardize Notre Dame winning the national championship."

Neither does Zbikowski. But boxing, he said, is simply an itch he constantly needs to scratch. And when his family was approached after his March 15 charity fight about making his professional debut at the Garden, he couldn't refuse. His opponent has yet to be determined, but Zbikowski said he will fight as a 6-foot, 215-pound heavyweight.

After Wednesday's media blitz and tour of the Garden, he couldn't have been more excited. Especially when Arum pulled Zbikowski aside, explaining that another famous heavyweight made his debut in that same arena 47 years ago: George Foreman.

The same George Forman, Arum explained, who will be part of the broadcast team for Zbikowski's debut.

"I just can't believe this," Zbikowski said. "Any of it -- Madison Square Garden, George Foreman sitting ringside. I'm so pumped up. I want to get back to my teammates, get back to working on our goals for the season, but I wish I could fight already."

ESPN.com senior writer Ivan Maisel contributed to this report. Wayne Drehs is a staff writer at ESPN.com. He can be reached at wayne.drehs@espn3.com.