"I'll never forget coach Walker," kicker Joel Howells said at
a somber news conference on campus. "He's had a huge impact on my
life the last four or five years. If you really knew him, I don't
know how you wouldn't remember him."

"Everything he taught us could be applied to life," linebacker
Nick Roach said. "You can't really measure something like that."

Two months ago, Northwestern gave Walker a four-year extension
through the 2011 season -- he was the only coach to lead the
Wildcats to three bowl games. Walker joined the school in 1999
after nine years at Miami of Ohio.

"He was resilient in life and I think his teams took on that
personality," athletic director Mark Murphy said. 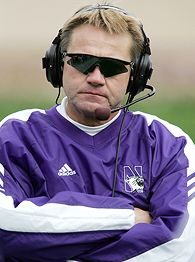 In October 2004, Walker checked himself into a hospital after
experiencing chest pains. He was diagnosed with myocarditis, an
inflammation of the heart muscle; the condition is not a common
ailment, and is usually caused by a virus.

Walker was out of the hospital in two days, and said he was
taking a new approach to his diet and work schedule.

"I've really taken my doctor's orders to heart, because
frankly, I want to see my grandkids someday," he said at the time.

Walker's Wildcats were 37-46 and made three bowl games, going
7-5 last season after a 50-38 loss to UCLA in the Sun Bowl.
Northwestern shared the Big Ten title in 2000 and went to the Alamo
Bowl. The Wildcats also went to the 2003 Motor City Bowl.

Walker was the first Wildcats coach to guide the team to four
seasons with at least six wins since C.M. Hollister in 1899-1902.

"A lot of guys are still kind of in shock," Howells said, his
voice cracking.

Walker called Howells on Thursday morning to see how he was
doing. A day later, Howells was reminiscing about meetings that
would veer into gab sessions in which the coach would tell stories
about his past.

"He was a spiritual leader on our team and worried about
people's integrity and character first and foremost," Howells
said.

"Everything he taught us could be applied to life. You can't really measure something like that."
Northwestern linebacker Nick Roach

Big Ten commissioner Jim Delany said in a statement: "Not only
was Randy a great friend to the conference, but to his players, his
staff and fans. Randy accomplished a great deal at every
institution he worked for, but most importantly he personified the
values of intercollegiate athletics -- he was positive, resilient
and honest."

Indiana coach Terry Hoeppner, who was on Walker's staff at Miami
of Ohio, said news of the death left him in "absolute shock."

"I lost a friend and someone I learned a lot from in our time
together at Miami," Hoeppner said. "He is a great man, a great
family man and a great person. Words cannot express how much I will
miss him."

Illinois coach Ron Zook, who graduated with Walker from Miami of Ohio in 1976, called him "a man of great passion."

"He was passionate about his family, his players, the Northwestern community and the game of football," Zook said in a prepared statement. "I've also known his wife, Tamara, since our days at Miami and offer her and her children our deepest thoughts and prayers."

Oklahoma offensive line coach James Patton, who played for Walker at Miami and coached under him at Northwestern, agreed with Zook's assessment of Walker's passion for coaching, telling ESPN's Joe Schad that Walker "took it to another level."

"He always said that Michael Jordan's father saw more in Michael than Michael did," Patton said. "As coaches he wanted us to see that players could be more than even they knew they could be."

"If you looked at how his teams played, you knew who he was. Schemes are schemes but he maximized the talent he had," Patton recalled. "And he coached every player the same way. It didn't matter if you were a freshman, a starter or on the scout team."

At Wrigley Field, where the Cubs hosted the Chicago White Sox, a
moment of silence was observed before the afternoon game, followed
by a warm ovation.

One of the most difficult times during Walker's tenure at
Northwestern came in August 2001 when defensive back Rashidi
Wheeler collapsed after participating in a conditioning drill and
died. His parents sued the school, claiming officials did not give
their son, an asthmatic, timely or adequate medical treatment.

After years of court wrangling, the player's family was awarded
a $16 million settlement. A judge approved the settlement last
August.

"That was a very difficult time for Randy --first of all having
a player die, the media attacks," said Murphy, who was hired three
years ago. "As it dragged on, it became more and more difficult.
To me, it really shows his resiliency, the strength of his
character to make it through a situation like that."

Cleveland Browns running back Jason Wright said he got off to a
bumpy start with Walker, but that things changed.

"Me and him had a rocky relationship in my first two years, but
ended up being the best of friends," said Wright, part of Walker's
first recruiting class at Northwestern. "His pushing, his prodding
-- it was for a greater purpose than just success on the field, he
was putting discipline into you and getting you to push through
adverse circumstances."

Walker was an assistant coach at North Carolina from 1978 to
1987 and then coached running backs at Northwestern in 1988 and
1989 before becoming head coach at Miami of Ohio, his alma mater. Northwestern is scheduled to open its season against the RedHawks on Aug. 31.

A native of Troy, Ohio, Walker was a fullback at Miami of Ohio
and graduated from there in 1976 with a degree in social studies
education. Five years later he got a master's degree in education
administration.

Walker was drafted by the Cincinnati Bengals, and after a short
stint returned to Miami as a graduate assistant.

Walker is survived by his wife, Tamara, and two children, Abbey,
28, and Jamie, 25, who is the school's football recruiting
assistant. A funeral service will be held at the First Presbyterian
Church in Evanston, Ill., at 10 a.m. Central time on Thursday.

The Associated Press contributed to this story.