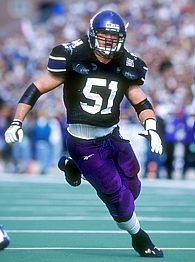 The 31-year-old Fitzgerald was a linebackers coach and
recruiting coordinator under Walker. His appointment came one day after he spoke at a memorial service for Walker.

Fitzgerald starred at linebacker for the 1995 Northwestern team
that won the Big Ten and went to the Rose Bowl, a game he missed
with a broken leg. He also played the next season when the Wildcats
made it to the Citrus Bowl.

Athletic director Mark Murphy said that when he was negotiating with Walker for a contract extension earlier this year, Walker told him Fitzgerald would be his choice as successor.

"Our wounds are deep and our morale is fractured," Fitzgerald
said, adding that he dreamed of being the head coach at his alma
mater, just not under these circumstances. "There are a lot of
heavy hearts, but coach would want us to move on."

Murphy said he decided against naming an interim coach for the
sake of stability, and that Fitzgerald's age was not a factor.

"He only played here 10 years ago, so he knows what it's
like," senior linebacker Nick Roach said.

In 2001, after serving as an assistant at Idaho, Fitzgerald was
hired by Walker to coach the Wildcats' defensive secondary. In
2002, he moved to linebackers coach, and then in 2004 added the
recruiting coordinator to his title.

"He's definitely ready for it. He has a great passion for the
game and Northwestern," senior safety Bryan Heinz said. "I loved
coach Walker, he gave me a chance to play, and it's time to move
on."

Former Northwestern linebacker Tim McGarigle, a St. Louis Rams draft choice who calls Fitzgerald his mentor, was working out at his alma mater on Friday afternoon.

"It was necessary to stay inside the program because to be successful at Northwestern you have to understand Northwestern," McGarigle said." He will embody everything Coach Walker was and stood for. These are two hard-nosed men who offer tough love."

McGarigle, who had 545 career tackles, most since the NCAA began tracking the statistic, added: "Coach Fitzgerald is primed for this job. The guy bleeds purple. It is his dream job. Forget about age. He is polished. And he is ready."

Fitzgerald won the Chuck Bednarik Award as the nation's top defensive player in 1995 and 1996.

"While this has been my goal from the moment I began coaching, this is also bittersweet. We've all had a difficult week with the loss of Coach Walker, my friend and mentor," Fitzgerald said. "But I'm determined to continue Coach Walker's legacy and build upon his successes. Northwestern will continue to have a football program built upon great work ethic, attitude and investment."

Walker was the first Wildcats coach to guide the team to four seasons with at least six wins since C.M. Hollister in 1899-1902.