The University of Louisville and Bobby Petrino have agreed on a lucrative new 10-year contract -- a deal the Cardinals hope will end the now-annual wooing of their football coach. 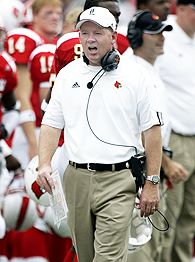 Petrino will receive an immediate raise from $1 million a year to $1.6 million, and his salary will steadily escalate throughout the length of the contract. By 2010 he is slated to earn $2 million, putting him into an elite category of coaches -- believed to be 14 currently -- at that plateau.

That's staggering money for a program that has only made two January bowl appearances and has a stadium seating capacity of 42,000. Athletic director Tom Jurich's bold move to elevate Petrino among the highest-paid and most secure coaches in the country is Louisville's bid to cement its future as a major football program.

"We have high aspirations," Jurich told ESPN.com Thursday morning. "We want to win a national championship. ... He's on a very, very short list of coaches in the country, as far as how he runs a program. With him, we're always going to be good. Even in our worst year, I believe we'll still be good."

The offensive mastermind has a three-year record of 29-8 at Louisville, including the Cardinals' second January bowl game ever this past season, the Gator Bowl against Virginia Tech. The Cards enter the 2006 season as a likely top 15 team and sport a pair of possible Heisman Trophy contenders in quarterback Brian Brohm and running back Michael Bush.

To keep its program among the ranked and the relevant, Louisville needed to pre-empt the powerhouse schools that have courted Petrino -- schools that he has listened to in the past.

"I can't tell you how happy I am with the commitment and the confidence that Tom Jurich has in me and the university has in me," Petrino said after signing the contract Thursday morning. "I also wanted to make sure that everyone understood, I know I've said it, that this is where my family wants to be. This is where I want to be. I want everyone to really believe it."

Significantly, Petrino asked that a $1 million buyout be put into his deal, should he attempt to leave the school.

"I don't believe in [buyouts]," Jurich said. "If a coach doesn't want to be here, I want him to leave. But Bobby said, 'I want to put that in here to show people how committed I am to this place.' "

His commitment has been called into question before.

Petrino was involved in the now-infamous 2003 dalliance with Auburn behind the back of coach Tommy Tuberville, his former boss on The Plains. An apparent deal between the two was undone only when media reports circulated, outing the secret meeting Petrino had with Auburn administration members.

In December 2005, Petrino met with LSU administrators before the Cardinals played in the Liberty Bowl, just days after signing a new contract and saying he was not interested in any other jobs. He also interviewed with Notre Dame and had discussions with Mississippi about its vacancy that year.

Last season there were reports that Petrino had discussions with the Oakland Raiders. Jurich said Petrino was offered the job several times, at a salary of up to $5 million annually.

"I thought, 100 percent, he was going to the Raiders," Jurich said. "When he turned that thing down, I knew we had a chance to keep him here for a long time. That's when I went to Bobby about this deal."

The timing of this contract is significant, heading into a season when a number of coaches at powerhouse programs are on the hot seat. There could be several high-profile job openings around the country, and Jurich undoubtedly would like to remove Petrino's name from consideration before it could be entered. The $1 million 2007 loyalty bonus is a good way to start, given what could be a very busy coaching carousel come December.

"Every year there's going to be good jobs open," Jurich said. "Every year he's going to be the top candidate for many of them. I don't expect that to discontinue, but he's got a base here now. Bobby sees that this can be something special."

Now that Jurich has signed his coach to a long-term deal, he wants to "move quick" on stadium expansion. He envisions bulking up Papa John's Cardinal Stadium to 63,600 seats, with an additional 45 luxury suites.

That will require some major fund-raising -- something Jurich said he didn't have to do to pay for Petrino's new contract. The football program has become progressively more profitable, and Louisville has been the most profitable basketball program in the country for much of the past two decades.

Pat Forde is a senior writer for ESPN.com. He can be reached at ESPN4D@aol.com. The Associated Press contributed to this report.