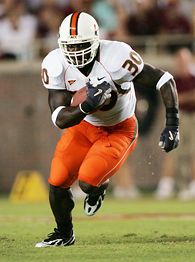 Moore's suspension will include the second game of the season
against Florida A&M. He was suspended for the Peach Bowl at the end
of last season, and according to The Miami Herald, Coker said this is an extension of the Peach Bowl suspension.

A team spokesman said that the four players' suspensions did not all result from the same incident.

"The message is pretty clear -- we have high standards here,"
Coker said. "We're a program of quality kids. And these kids are
good kids. They're not bad kids. But we've got to get this message
across."

Coker told the Herald the players knew about the suspensions before Tuesday, but he wouldn't elaborate.

The suspended players will continue to practice with the team.

"These players are going to come back," Coker said. "They're
going to have outstanding years. I believe that. But it won't be
the first game."

Moss, a senior, rushed for 701 yards and 12 touchdowns in eight
games last year before a knee injury sidelined him for the rest of
the season. He'll be replaced by junior Charlie Jones, who rushed
for 507 yards last year.

"When you lose good players, obviously it has an effect,"
Coker said. "But our expectations haven't diminished."

The suspensions are the latest blow this summer for a program
accustomed to contending for the national title and trying to
rebound from disappointing 9-3 records the past two years.

Former top recruit Willie Williams has been seeking to transfer.
Reserve safety Willie Cooper was shot in the buttocks by an unknown
assailant but escaped serious injury.

"It has been a tough offseason," Coker said. "There are some
things that always go on with a major-college program that you have
to deal with. But the key is to deal with them. That's what I want
to do."