Dwayne Jarrett sat out the last half-hour of USC's second practice Friday to rest a tender left quadriceps. From the sideline the All-American wideout cheered on the program's newest receiving talent, freshman Vidal Hazelton, as the New Yorker made a remarkable one-handed diving catch.

"Hopefully, it happens before Sept. 2, but right now I guess it's all up in the air. I'm really just praying on it."
-- Dwayne Jarrett, on his playing status

Jarrett, who was quick to say he expected to be ready to go for Saturday's practice, is optimistic he will be on the sidelines when USC opens its season Sept. 2 against Arkansas. But right now, Jarrett is trying to stay upbeat while his playing status is in NCAA-imposed limbo.

Trojans coach Pete Carroll has said in the past that he didn't think Jarrett would miss any games. Jarrett is allowed to practice with the Trojans while awaiting the NCAA's decision. 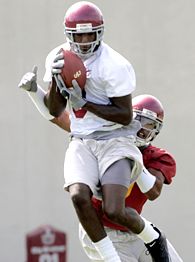 Back in June, the NCAA ruled Jarrett, who had 91 receptions for 1,274 yards and 16 touchdowns, ineligible for receiving an "extra benefit" last season. At issue is his living arrangements during the 2005 season, when Jarrett shared an off-campus apartment with former quarterback Matt Leinart. The trouble began last April after Leinart's father Bob detailed that, while both players paid $650 a month, he was handling the balance of the $3,866-a-month lease.

"I really don't believe I did anything wrong because I was paying rent," Jarrett said Friday. "And hopefully the NCAA sees it that way."

Jarrett says he has been in touch only with USC's compliance office about his status and has been told he should be reinstated. When, though, is another matter.

"Hopefully, it happens before Sept. 2, but right now I guess it's all up in the air," he said. "I'm really just praying on it."

So, too, are the folks at USC. Exactly two years ago, the Trojans had another star receiver fall into NCAA limbo. Mike Williams made an appeal for reinstatement that was subsequently denied. Williams was notified the day the Trojans were flying cross-country for their season opener against Virginia Tech, but Jarrett's situation is much different than that of Williams, who had a deal with an agent and the dollars involved were much greater.

USC filed its request to the NCAA for Jarrett's reinstatement in mid-July. The school is still waiting to hear back from the NCAA about what else it might be required to provide to have Jarrett reinstated. In the meantime, USC knows it's best for Jarrett and the program to stay tight-lipped about the process.

Given the uncertainty, Jarrett's mood is commendable. He wore a smile for most of Friday afternoon. He laughs at how he is now one of the "old guys" around practice, just as Williams was when Jarrett arrived from New Jersey in 2004. Back then Jarrett was a willowy 6-foot-5, 190-pounder battling homesickness. These days, he's an imposing 6-5, 220 (up 10 pounds from last year) and much more comfortable in his surroundings. He isn't concerned that his reputation may have been dragged down in this process.

"I mean it is what it is, I guess," he says. "But I'm really looking forward to this season and I'm just trying to enjoy the moment out here."

Bruce Feldman is a senior writer for ESPN The Magazine.