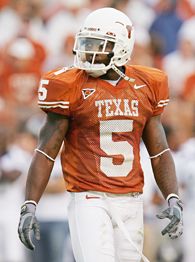 Brown was charged with unlawfully carrying a weapon, a loaded 9
mm handgun, and Class A misdemeanor, and possession of under 2
ounces of marijuana, a Class B misdemeanor.

Gatewood and Harris were charged with the same drug misdemeanor.

The attorney for Brown and Gatewood said Gatewood legally
purchased the gun earlier this year and that neither of them smoked
the marijuana found in the car.

Brown and Gatewood were released on personal recognizance bond
Monday afternoon and Harris was released later in the day.

Coach Mack Brown said he met with both players and was "holding
them out of all team functions as we gather as much information as
possible before making a team decision."

"One thing that's awesome about the University of Texas, you
have opportunities to have great depth," Chizik said.

According to the arrest affidavit filed by Travis County
deputies, the three were in a car Harris was driving on Interstate
35 about 2:50 a.m. A deputy pulled the group over after watching
the car weave erratically and nearly strike another car.

According to the report, Harris got out of the car when pulled
over and Brown and Gatewood were asleep. Harris passed a field
sobriety test but told the deputy he had been smoking marijuana and
there was "some" in the car.

When deputies approached the vehicle they saw Brown, who was
sitting in the back seat asleep, with his hand on a gun in his lap.

Under state law, a person commits an offense if he
intentionally, knowingly, or recklessly carries on or about his
person a handgun, illegal knife, or club.

The officers also reported finding a marijuana "blunt" under
the front seat and charged all three with possession. Only Brown
was charged with a weapons violation.

Attorney Jamie Balagia said Gatewood bought the gun at a store
and left it in the car after going to a shooting range a couple
weeks earlier.

Balagia said Brown picked up the gun only after it slid out from
under the front seat and intended to bring it inside when the
players got home.

If Brown is suspended, it could be a huge blow to a defensive unit
considered the team's strength this season. Brown was likely to
draw the assignment of covering Buckeye wide receiver Ted Ginn Jr.,
one of Ohio State's top playmakers.

The Longhorns could start junior Brandon Foster or sophomore
Ryan Palmer. Foster has played in 22 games and Palmer in 10 last
season. Neither has been a starter.

Brown has 127 career tackles and three interceptions. He broke
his arm in the second half of the Rose Bowl last year and had six
tackles in a 56-7 win over North Texas.

Gatewood was a former wide receiver before switching to
linebacker this season. He made one tackle on special teams against
North Texas.

Mack Brown has suspended a starter charged with a misdemeanor in
the past.

In 2003, standout running back Cedric Benson was charged with
criminal trespassing and missed a game at Baylor.

Before the Rose Bowl, running back Ramonce Taylor and defensive
back Cedric Griffin were questioned by police in an assault
investigation but neither was ever charged. Both played in the game
and played key roles in the 41-38 win over Southern California.