They didn't want to watch. In some cases, they won't even confess that they did. After all, Arizona is a rebounding program, a young, impressionable one, so it's easy to understand why the Wildcats are reluctant to admit seeing the shocking horror movies that are terrifying the West Coast:

"The Ring Three: SECed Again" and "I Know What You Did Last Labor Day Weekend." 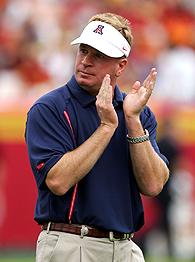 By now, everyone knows the plot. Jaunty, optimistic, pass-happy Pac-10 football teams travel to the Southeast for backwoods adventures only to be mesmerized by the frenzy of the SEC. They are then captured, tortured and unprintable things are done to them -- see California's 35-18 humiliation at Tennessee and Washington State's 40-14 massacre at Auburn.

Cue the dueling banjos from "Deliverance."

It's not the sort of thing Arizona coach Mike Stoops wants his players sneaking off to watch, so it's understandable that the Wildcats are coy about providing reviews.

They are going to Tiger Stadium, a.k.a. "Death Valley."

Hasn't Stoops seen what LSU did against Pac-10 teams the past two seasons?

The Tigers trounced Oregon State and Arizona State by a combined, er, five points. First, they beat the Beavers 21-20 by putting a voodoo hex on Alexis Serna, forcing the nation's best kicker to miss three extra points. Then, LSU's dominating defense throttled the Sun Devils, holding them to only 560 yards in a 35-31 victory.

Who knows? The Pac-10 had managed to go 7-3 versus the SEC since the turn of the century, but that was before a 1-2 weekend which became a media sensation (USC barely slipped by revenge-minded Arkansas, 50-14).

Still, Arizona remains a program on the mend. The Wildcats have won only eight Pac-10 games over the last five years and their offensive woes continued against BYU, particularly an anemic running game.

The Sun Devils feast a year ago notwithstanding, LSU, which hasn't allowed a touchdown in 10 quarters, isn't the ideal opponent for a team still using training wheels on offense. Despite a strong debut last year as a true freshman, Tuitama hasn't faced anything like the Tigers' defense or the Tiger Stadium atmosphere.

"They're going to put a lot of pressure on us and we've got to be sure we can handle it," Stoops said. "No one scores a bunch of points on them."

"Our coaches came from the Big 12 and Miami. I think our defensive approach is a little different than other Pac-10 schools."
-- Arizona safety Michael Johnson

Arizona's best hope might be LSU looking ahead to a marquee SEC Western Division showdown at Auburn on Sept. 16.

Don't count on that, though, particularly with LSU coach Les Miles eyeballing Stoops across the field. These two have a past, and it doesn't involve trips to the movies.

Before taking over the Tigers in 2005, Miles spent four seasons as Oklahoma State's head coach. Before taking over at Arizona in 2004, Stoops was Oklahoma's co-defensive coordinator. Miles upset Stoops and Oklahoma in 2001 and 2002, while the Sooners ran up the score, 52-9, in 2003.

Needless to say, their relationship wasn't always cuddly during the "Bedlam Series."

Johnson, in fact, uses Stoops' background as an explanation for why he doesn't expect the Wildcats to perform like Cal or Washington State, both of whom conformed to the "soft" Pac-10 stereotype last weekend.

"Our coaches came from the Big 12 and Miami," Johnson said. "I think our defensive approach is a little different than other Pac-10 schools."

That's Arizona's strategy. The Wildcats won't play into the Pac-10 versus SEC angle. They don't plan to be a sequel for another slasher-film bloodbath.

"I'm basically about Arizona football," Johnson said when asked about Pac-10 pride. "And we can match up with anybody in the nation."