Bill Callahan shuns talking about benchmarks, saying only that his program still has much growth remaining.

But Nebraska's trip to Southern California for Saturday's game is an obvious litmus test for the coach's work so far with the Cornhuskers.

"One game won't define this season," Callahan said. "I won't let it for these players. The game is important and we want to do well. We want to measure ourselves and then take it into the next game." 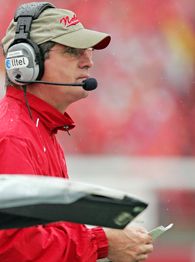 Nebraska fans have eagerly anticipated the trip to USC -- the first game between the two traditional powers since a 21-21 tie in 1970 -- since it was announced.

The excitement about the game has only magnified after the Huskers' strong finish last season and a 2-0 start in 2006.

The Huskers' transformation under Callahan -- who was hired prior to the 2004 season -- has been the most radical in the recent history of the program. But the excitement of Big Red partisans really didn't take hold until a late run last season included wins over Kansas State, Colorado and an Alamo Bowl victory over Michigan.

After a winter of excitement fueled by those triumphs, coupled by the quick start, Nebraska fans are hungry to gauge whether Callahan's team really measures up to the national elite. Saturday's game at the Coliseum will give them that opportunity.

Nebraska fans are no longer complaining about the controversial decision to fire Frank Solich and replace him with Callahan, an NFL head-coaching washout at Oakland who was not athletic director Steve Pederson's first pick for the job.

Most have forgotten that Callahan split his first 20 games at Nebraska -- including blowout road losses at Texas Tech, Oklahoma, Kansas State and Kansas over his first two seasons -- before forging the modest five-game winning streak he brings into Saturday's game.

Callahan unabashedly has used the USC program as a model for building his program. And much like USC coach Pete Carroll, another NFL refugee, he has awakened a dormant program with a shot of enthusiasm fueled by recruiting success.

"It's a great game to measure ourselves, and the challenge will be significant," Callahan said. "We're excited to play and see where we're at. The outcome won't define us, but it will help us get better."

That development has been keyed by QB Zac Taylor, who said his current team can now challenge the national elite. Before this season, he wasn't quite so sure.

"It's a great game to measure ourselves, and the challenge will be significant. We're excited to play and see where we're at. The outcome won't define us, but it will help us get better."
-- Nebraska's Bill Callahan on facing USC

"We didn't have the offense down very well and we weren't making plays at this time last season," Taylor said. "But now, we're more confident and ready to play a team like USC."

The nation will be curious, too.

The Huskers have piled up 49 points in each of their first two games this season. The offense has been balanced, with at least 200 yards rushing and passing in both games.

Taylor threw for a career-high four touchdowns against Nicholls State and became the seventh Husker to pass for 3,000 yards in his career. He has completed passes at a 73.2 percent clip through his first two games, and his passing efficiency rating of 184.24 ranks him seventh nationally.

But he will be facing his biggest challenge of the season against USC's talented defense.
Nebraska is a 19-point underdog against the Trojans -- its second-largest point-spread deficit since the Big 12 was formed. Only in a road game at Oklahoma two seasons ago, when they were 30-point underdogs, have the Huskers been as lightly regarded before kickoff.

"USC has played in the last three national championship games, and they have a lot of confidence from what they have accomplished," Taylor said. "They won't be intimidated by us. We're probably just another game for them."

The Huskers' defense was expected to be the strength of the team this season, but it has struggled with injuries. After losing projected impact cornerback Zackary Bowman in training camp and corner Isaiah Fluellen last week with season-ending injuries, Nebraska's depth has been depleted. 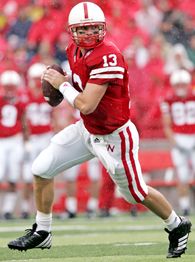 The Nebraska corners also are much smaller than USC's deep threats, Dwayne Jarrett and Steve Smith. That size differential seemingly should be a big advantage for USC QB John David Booty.

USC offensive coordinator Lane Kiffin was extremely disappointed with his wide receivers' play against Arkansas, grading them with an "F" for their overall play. But the Huskers are expecting improvement from the group and maybe even a little trash talking to go with it.

"Sometimes those boys tend to be a little bit cocky," Nebraska CB Cortney Grixby said. "We just want to stay humble-minded and talk with our pads."

Nebraska defensive coordinator Kevin Cosgrove has barely blitzed with his current unit during the first two games of the season. But that will likely change as he attempts to buy time for his retooled secondary via increased pressure.

Although Callahan was careful to praise USC's recent recruiting success as the best in the nation, some Huskers aren't buying into the talent gap between the two programs.

"We're both Division I teams," LB Steve Octavien told the Grand Island (Neb.) Independent. "They're a powerhouse, we're a powerhouse and we all have big-time players, so I don't think they have an advantage.

"Even if they have No. 1 recruiting classes, it really doesn't matter to me. I don't think it really matters at all. They really don't have an advantage over us."

The culture shock for Saturday's game at the Coliseum should be fairly clear. Hollywood glitterati like Snoop Dogg are expected to stroll the USC sidelines.

"But Lincoln is the same way," Nebraska linebacker Corey McKeon said, chuckling. "We have Larry the Cable Guy in his skybox for our games."

The comedian -- also known as "The Freight Train of Comedy" -- loves his Huskers and follows them avidly. To achieve success against the Trojans, Callahan needs to steal a page from this big fan and "git 'er done" at the Coliseum.

"This program was there under coach [Tom] Osborne and we're trying to get it back to that level," Callahan said.

Saturday's game will be an indicator how far the Huskers have to go to reach that goal.