SOUTH BEND, Ind. -- The clock was about to run out. The game about to end. And though the scoreboard indicated everything inside Notre Dame Stadium had already been settled, that was hardly the case.

On the Michigan sideline, chaos reigned around the water cooler. Running back Mike Hart and receiver Steve Breaston knew what a 47-21 victory over Notre Dame meant. They knew the Wolverines hadn't won a road opener in six years, knew they hadn't won at Notre Dame in 12. In the shadows of Touchdown Jesus, they knew they had stomped on the second-ranked home team's dreams of a national championship. 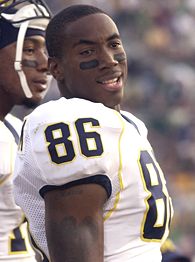 So to celebrate, they prepared to dump the water jug on head coach Lloyd Carr. But then something happened.

"Steve and I were just standing around talking to each other, 'Do it, do it,' " Hart said. "'C'mon, do it. This is huge.' But then I started thinking, 'You know what? We haven't done anything yet. And we came down here expecting to do this. So you know what? No. We're not going to do it.' "

But senior linebackers Shawn Crable and Prescott Burgess had other ideas. As soon as Hart and Breaston put the cooler down and walked away, Crable and Burgess picked it up. And seconds later, Carr was doused, his polo shirt stuck to his wiry 61-year-old frame while tiny beads of water fell from the brim of his cap.

"Coach Carr got what he deserved," Burgess said. "We did that for him. You hear all these people saying his time is up, he should move on. I just heard on TV the other day, Michigan needs a new coach. His time is not up. We don't need another coach. Things are just fine in Ann Arbor."

After Saturday, few would argue. Following a season in which Michigan suffered its lowest win total (7) and finished unranked for the first time since 1984, the Wolverines stormed into South Bend and dominated the Irish in every aspect of their first big test of 2006, sending a message as clear as the BCS Championship Trophy.

Against the Irish, the domination came in every phase of the game. On offense, Hart rushed for 133 yards and a touchdown while sophomore receiver Mario Manningham consistently beat the Notre Dame secondary, catching four passes for 137 yards and three touchdowns.

On the other side of the ball, the maize and blue kicked, clawed and shoved their way into Notre Dame quarterback Brady Quinn's face, pressuring Quinn into three interceptions and a fumble. The defense also sacked Quinn three times for a loss of 19 yards and held running back Darius Walker to 27 yards on 10 carries.

The only thing the Irish felt Saturday was the free fall from the No. 2 spot in the rankings. In his 15th game on the job, Charlie Weis' Notre Dame honeymoon came to an abrupt end, just as it did three years ago for Tyrone Willingham. Both Notre Dame coaches entered their 15th game 11-3, both left them after embarrassing losses to Michigan.

The Irish did plenty to help the Michigan cause, with a Quinn interception, a David Grimes fumble on a kick return and a blown coverage on a 69-yard bomb to Manningham all but handing the Wolverines 21 first-half points.

In an eight-minute span from the 3:53 mark of the first quarter to the 11:26 mark of the second, the Wolverines scored 20 unanswered, turning a 7-7 battle into a 27-7 route. By the time halftime rolled around, the Wolverines led 34-14, the most points a Notre Dame team had surrendered in the first half at home in over 45 years.

But just as much credit has to go to the Wolverines. With the game out of reach entering the fourth quarter, Michigan had twice as many points (40-14), twice as many first downs (16-6) and nearly twice as many yards (309-118) as Notre Dame.

The Irish had more penalties (7) than first downs (6). And Quinn had completed as many passes to Burgess, the Michigan linebacker, as he had to Notre Dame preseason All-America candidate Jeff Samardzija.

"This just proves that all those rankings just don't mean much," said Michigan defensive end LaMarr Woodley. "Just throw them out the door. It's about the team that wants it more. And today, it's pretty clear that was us."

That's why when Weis walked to the podium to begin his postgame news conference, or autopsy, he refused to take any questions before showering the Wolverines with praise.

"It's only right to give just due to your opponent who just kicked your butt," Weis said. "They just came and whooped us pretty good. They deserve their due."

But now Carr has something to throw right back at his critics. An eye-opening, jaw-dropping 26-point victory over Notre Dame, on the road, which for the first time in six years, has the Wolverines in the thick of the championship hunt as the calendar inches ever closer to October.

"The credit, it sure as hell doesn't go to me," Carr said. "The guys out on the field, they played the game."

Afterward, behind the closed doors of the Michigan locker room, Carr told his players Saturday's win was one of the biggest in school history. And they should feel proud to be a part of it.

But Crable, Burgess and others? Truth is they were just proud their coach was a part of it.

"I hope this shows everybody that we're by [Carr's] side and we'll do whatever we have to do for him," Burgess said. "He deserves a win like this."

Wayne Drehs is a senior writer with ESPN.com. He can be reached at wayne.drehs@espn3.com