A few hours after Notre Dame and $40 million head coach Spanky O'Genius frantically tapped out 47-21 at home against Michigan, a program 1,800 miles away experienced a different reversal of fortune with very little national fanfare. 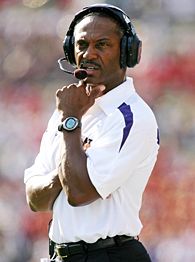 The Huskies, 3-19 over the past two seasons, earned the winning margin by dramatically blocking an extra point. The defense then clinched the victory with an interception.

A team previously incapable of making critical plays in the fourth quarter did just that.

So on the same day the program that unceremoniously dumped coach Tyrone Willingham humiliated itself on national television, Willingham's new team quietly, tentatively took a step forward from woeful to hopeful (remember, Notre Dame canned Willingham after just three seasons and anointed his replacement, Charlie Weis, a savior after a single campaign).

Of course, a 2-1 record and a one-point victory over Fresno State wouldn't have been cause for celebration among Huskies fans a few years ago. Such is business, though, when a former top-25 program is the two-time offending Pac-10 cellar dweller.

Losing 35-16 to Fresno State in a shocked Husky Stadium to open the 2004 season started the swoon. Perhaps beating the Bulldogs in front of the home fans will reverse the trend?

The team's perception could experience another significant uptick if it manages to rekindle the winning magic when UCLA visits Saturday in both squads' conference opener.

The Huskies have lost eight of nine in the series and blew a 17-7 fourth-quarter lead last year, one of four defeats that featured final-frame implosions.

"UCLA has been probably one of the top three or four teams in this conference, if you look over a long period of time," Willingham said. "So they are a team that you have got to take down."

While Weis' celebrated reclamation -- and its present face plant -- has taken place under klieg lights, Willingham has been laboring mostly in the shadows. 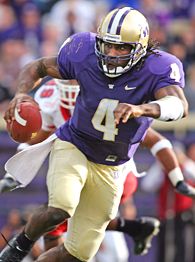 When Willingham announced in August that the Huskies would earn a bowl berth, reporters produced more smirks than the entire Jack Nicholson oeuvre. Yet, suddenly, finding four wins on the schedule doesn't seem such a Quixotic task.

"We should expect wins every week," quarterback Isaiah Stanback said.

Stanback is a chief reason the Huskies will scare some folks. He has become the West Coast's best pass-run threat, averaging 70 yards rushing and 153 yards passing per game.

He also has demonstrated resilience. Trailing 23-13 at Oklahoma, the Huskies had a first-and-goal on the 4-yard line. Stanback fumbled on an option play, and the Sooners drove the length of the field for a decisive touchdown.

Stanback, frequently criticized for his inability to make big plays at critical times, was disconsolate after the game.

But he bounced back and was smart and efficient against Fresno State, throwing for two touchdowns and running for another. His spectacular 36-yard scramble to escape intense pressure was the cornerstone of a confidence-building 87-yard drive that gave the Huskies a 14-7 lead.

"[Stanback] can be too hard on himself," safety C.J. Wallace said. "We know what he can do and we've always had confidence in him. We've just got to keep building him up."

The biggest surprise has been the solid play from the offensive line, which was widely seen as a glaring weakness entering the season due to three new starters with little or no playing experience.

That crew, however, has surrendered just two sacks and has paved the way for the Pac-10's top rushing offense (210.7 yards per game). The Huskies haven't led the conference in rushing since 2000, when swashbuckling quarterback Marques Tuiasosopo guided an option attack that won the Rose Bowl and finished ranked No. 3 in the country.

Not that anyone is expecting that. Or are they?

When asked what his goal for the season is now, Willingham defiantly shot back: "Win the conference."

Fronting confidence is one thing, but the Huskies still have big issues on defense, which was projected in the preseason to be stronger than it has been thus far. It struggled to stop the run against Oklahoma and Fresno State, but the pass defense has been more worrisome, yielding 245 yards per game, worst in the conference, and producing only four sacks.

While there's been significant quarterback turnover, poor pass defense tends to be a problem out West. But Willingham hasn't paid much attention to media quibbles in the past, so it's unlikely he will now.

When the Notre Dame result was noted to him Monday, his ensuing grin was entirely in reaction to the ridiculous notion that a reporter could provoke him to take the bait.

As for his program's less ballyhooed -- and more incomplete -- turnaround, he is only willing to set lofty goals, not make predictions.

"As I like to say, the story is not written yet -- there is a lot of ink that has to be placed somewhere before this story is written," he said. "So I am not jumping to any conclusions about where we are right now."