None of that fodder mattered Saturday night.

In fact, all of it paled in comparison to the improbable, unbelievable (you-pick-the-adjective) game that unfolded in Spartan Stadium. 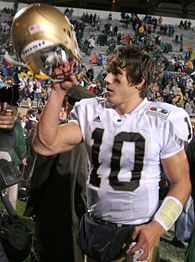 It was billed as the 40th anniversary of the 1966 "Game of the Century" -- a tie that eventually helped Notre Dame win the national championship -- but truth be told, the 2006 version deserves its own special one-of-a-kind billing.

The Fighting Irish, left for dead entering the final quarter, somehow erased a 16-point deficit and turned it into a 40-37 win that saved their season just before it went hurtling off the tracks and into the surrounding Michigan farmland.

"There's a lot of crazy things that can happen out there, especially with last year's game and how that all worked out," said Notre Dame quarterback Brady Quinn, who ended up with 319 passing yards and five touchdowns. "Until it hits all zeroes on the scoreboard, then it really sets in.

"Once we got in our two-minute mode, we kind of found a rhythm and really realized we could move the ball on them. It kind of got our confidence back. Coming off of last week's game, you can't build that confidence until you get in a game situation and start moving the ball."

The bottom line: One team showed up and one team was shown up again. Then they flipped the script and reversed roles in this game for the ages.

From the opening kick, Michigan State set the tone and owned Notre Dame in front of 80,193 at Spartan Stadium -- the third largest crowd in stadium history. Someday, all of Michigan and northern Indiana will claim they were here to see history in the making.

The Fighting Irish (3-1) opened the game and promptly went three-and-out.

The Spartans (3-1) countered with a three-play drive of their own.

"As low as they were last week at this time, that's how high they are right now. We have to make sure we don't get on an emotional roller coaster. You don't want to be too low or too high -- and right now, it's a pretty high high."
-- Charlie Weis

Jehuu Caulcrick ran over ND safety Tom Zbikowski just past the line of scrimmage and rumbled 29 yards to the Irish 44. Quarterback Drew Stanton followed it up with a 10-yard scramble for another first down. And then Stanton found receiver Kerry Reed on a 34-yard TD strike to make it 7-0.

It may have been the anniversary of that 10-10 classic, but this one wasn't going to be played at that same pace.

After trading possessions, Notre Dame appeared to get a spark from Zbikowski on a punt return. But after the safety went 25 yards to reach midfield, he fumbled and it was recovered by Brandon Fields.

Four plays later, MSU receiver Matt Trannon found Javon Ringer on a 26-yard TD to give the Spartans a 14-0 lead.

By the time the first quarter ended, MSU was up 17-0 and was dominant on the stat sheet.

And that much anticipated quarterback matchup? It wasn't one. 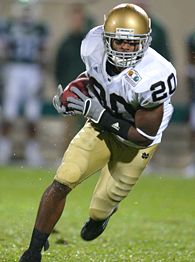 The Irish finally woke up and traded scores the rest of the half to go in trailing 31-14 at the break.

"I think the players were starting to realize at halftime that the season was falling away from us," Notre Dame coach Charlie Weis said. "After the game they played last week and then we are down big at halftime, it was like, 'Well fellas, what's it going to be? Are we going to come out and give us a chance to win the game?'

"The issue is going to be: How important it is to you?"

The answer in the third quarter was decidedly indecisive.

Notre Dame scored early on a 62-yard TD pass from Quinn to tight end John Carlson to close the gap to 31-21.

But MSU answered back with a 30-yard TD run by Caulcrick. The extra point failed, setting up the fourth-quarter fireworks.

The Fighting Irish got ever closer when Quinn found Jeff Samardzija for a 43-yard TD -- on a fourth-and-5 play that Weis later admitted wasn't very smart -- to make it 37-27 with 8:18 left.

"It's a special place and sometimes special things happen," Samardzija said. "Unfortunately for a win like this, you've got to do something bad to get yourself in that situation. Hopefully from here on out we can just avoid the bad situations."

The Spartans clearly couldn't. In a year when the game clock is said to move too fast at every turn, MSU couldn't get the seconds to tick off fast enough.

Stanton was forced to scramble on a third-and-9 play by a suddenly revitalized ND defense when free safety Chinedum Ndukwe stripped Stanton before recovering the ball for the Irish at the MSU 24.

"We made too many mistakes when it counted, and we didn't finish it up and I take credit for that as a coach -- that we didn't finish," MSU head coach John L. Smith said. "I thought we got conservative and probably should have come out and come back and started throwing it because the rain had let up a bit."

The noose around Sparty's neck grew tighter on the ensuing kickoff when Demond Williams inexplicably returned the ball to the MSU 12 before taking a knee.

On third-and-3 at the 19, Stanton's pass intended for Reed was picked off by backup cornerback Terrail Lambert and returned 27 yards for what turned out to be the game-winner with 2:53 left.

The Spartans mounted one final, futile comeback attempt, but that too ended in a Lambert interception at the ND 27 with 14 seconds left.

What most assuredly looked like "wait until next year" for the Irish turned into a raucous celebratory ride back to South Bend.

"As low as they were last week at this time, that's how high they are right now," Weis said. "We have to make sure we don't get on an emotional roller coaster. You don't want to be too low or too high -- and right now, it's a pretty high high.

"This is a tough one to beat because this game meant a lot to us."

Mark it down: Sept. 22, 2007 in South Bend. It could be another "Game of the Century." Flags, megaphones and smack talk are clearly optional.

David Albright the senior coordinator for college sports at ESPN.com. He can be reached at david.albright@espn3.com.